Making The Most Of BOG 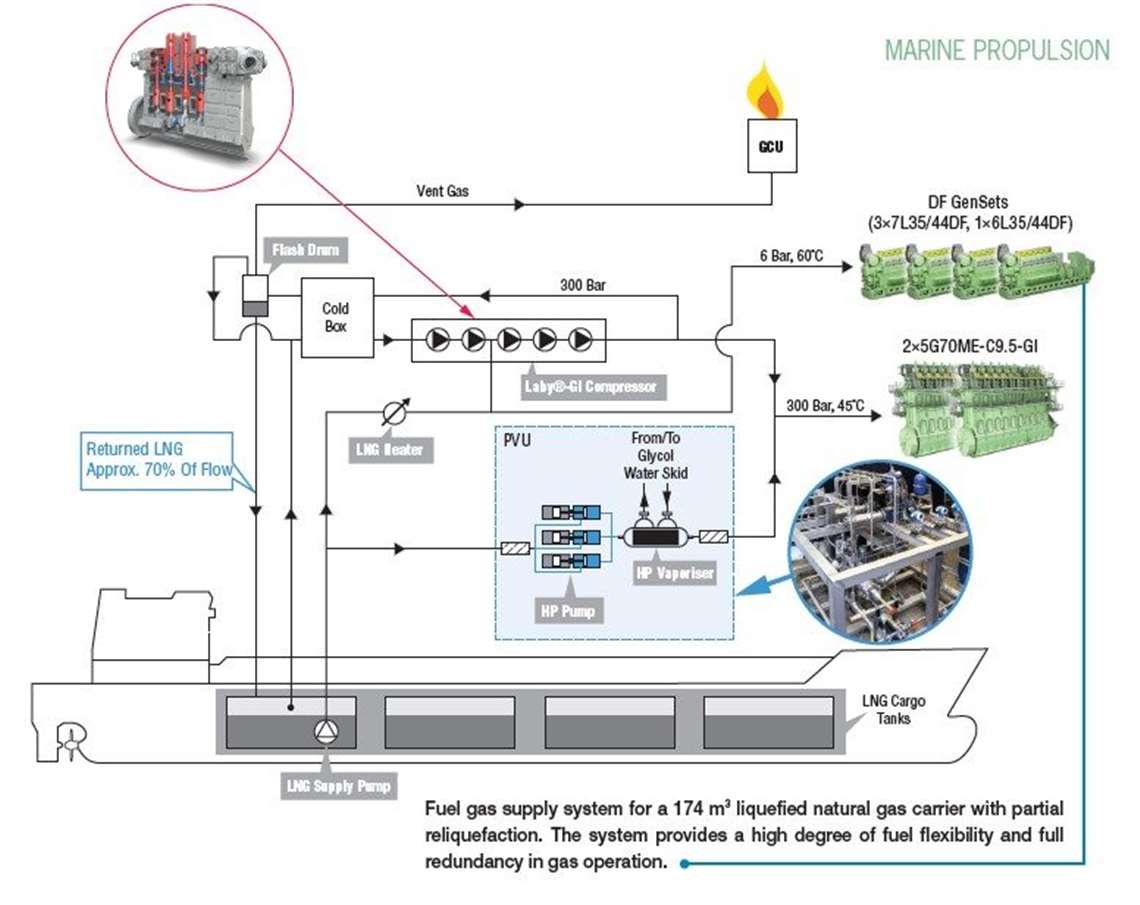 With varying vessel types, the ME-GI engine can be exposed to different gas qualities depending on the bunker supplier and the position of bunkering. On LNG carriers, the fuel gas quality will also fluctuate depending on the specific point in time of the ship’s voyage, for example, loaded or ballasted.

“One of the benefits of the diesel-type combustion utilized in the ME-GI is the ability of the two-stroke engine to run on almost any fuel gas quality with no or limited decrease in efficiency,” said René Sejer Laursen, promotion manager, dual-fuel ME-GI/LGI engines, MAN Diesel & Turbo. “The ME-GI engine is thus not vulnerable to gas quality or low methane numbers and knocking does not pose a risk.”

By operating the ME-GI engine in three different modes, a high degree of fuel flexibility is provided, the company said. The dual-fuel mode maximizes the use of fuel gas and reduces the pilot oil consumption to a minimum, while the fuel gas mode allows for operation on almost any mixture of fuel oil and gas. At the other end of the spectrum, there is also the pure fuel oil only mode.

The engines’ ability to change between gas fuel and heavy fuel oil allows the owners to change between fuels whenever a vessel enters a harbor or an emissions restricted zone. ME-GI engines can maintain a high efficiency without any methane slip during load changes or during variations in ambient air conditions, according to the company.

MAN Diesel & Turbo has developed a range of fuel gas supply systems (FGSS) to facilitate engine operation, with a focus on reliability and cost-optimized FGSS solutions for both LNG carriers and for LNG fueled ships. With both two-stroke ME-GI engines and four-stroke auxiliary engines on board, the FGSS must be able to provide varying gas pressures for the engines. The ME-GI requires high-pressure (HP) fuel gas, i.e., 300 bar at 45ºC, while a DF four-stroke generator set from MAN Holeby requires low-pressure (LP) fuel gas at approx. 6 bar at 0° to 60ºC.

LNG carriers typically have an abundance of boil-off gas (BOG) and the latest solution from MAN Diesel & Turbo focuses on using and balancing the amount of BOG in the most economical way, both from a capital and an operating expenditures view. For an LNG fueled vessel an LNG fuel tank is installed which is fit to the fuel consumption of the main engine and the auxiliary engines.

Looking at the FGSS for an LNG carrier, the changes of the BOG is of great importance for the design of the system. MAN Diesel & Turbo has as a standard FGSS developed a combined solution, where as a first variant a five-stage compressor is supplying the ME-GI engine with high pressure gas and the DF engines with low-pressure fuel gas. The low-pressure gas is taken off the compressors’ second stage.

A second main component in this system is the company’s recently introduced pump vaporizer unit (PVU) system, which can supply high-pressure gas to the ME-GI engine. The main components in the single-lift PVU module are three hydraulic-driven, high-pressure LNG pumps, a compact glycol based vaporizer system, safety valves and instrumentations and filters for the LNG and for the glycol. Also included is a control system prepared for ME-GI engines integration of the PVU.

A third system included in the FGSS for LNG carriers is a partial reliquefaction system. The main components in the reliquefaction process are a cold box that receives the high-pressure gas after the five-stage compressor and a flash drum from which around 70% of the LNG is returned to the LNG tank. The remaining amount is returned from the cold box as a 1 bar gas stream to the first stage of the compressor. The cold box is in principle a heat exchanger, where warm excess fuel gas at 300 bar is cooled and expanded via two Joule-Thomson valves to gas at 1 bar.

“The operating combinations of these three systems are depending on the vessel type, voyage pattern and technical layout of the ship,” Sejer Laursen said. “The system indeed provides a high degree of fuel flexibility and full redundancy in gas operation.”

For LNG fueled engines for propulsion and for power generation, MAN Diesel & Turbo is offering and supplying a fuel gas supply system, which differs from the system proposed for the LNG vessels.

The design strategy here is that the owner can chose to operate on LNG from a fuel tank if this is economical or to operate on a liquid fuel like heavy fuel oil (HFO) if that is more economical at a given time.

Back to LNG carriers, the FGSS in this case has a PVU system with a high-pressure pump and an LNG vaporizer providing 300 bar gas to the main engine. The FGSS consists of a five-stage compressor, which like in the earlier case supplies 300 bar LNG gas to the ME-GI engine and 6 bar fuel gas to the auxiliary engines. The difference to the first FGSS for the LNG carriers is that this system can provide not partial, but full reliquefaction of the LNG and return the liquid to the LNG tank. This solution offers full fuel flexibility for the operator.

An important part of the system is the cold box. Since in this case there will be no requirement for operation on gas, the cold box is supported by a nitrogen loop providing the cooling of the box. The system allows for complete reliquefaction of the LNG fuel, which allows for full operation on a liquid oil fuel if this is preferred.

For those requiring full redundancy of BOG delivery, a simplified and cost optimized system based on two fuel gas compressors has been proposed that leaves out the cryogenic pump and vaporizer. The Laby-GI compressor used here has a range of 150 to 300 bar. In a case of low volume of BOG an LNG in-tank pump and a vaporizer can supply the gas to the compressor.

The design can contribute to a tangible capital reduction for the complete propulsion system in comparison with systems based on the Laby-GI compressors.

“In a multiple installation of CT-D compressors, for example in a case of four CT-D compressor units in parallel, each unit has two compressors driven by a common electric motor,” Sejer Laursen said. “The application of multiple compressors opens interesting partial redundancy options.”

“We also see a market for our ME-GI units for LNG carriers as small as 30 m3, where two CT-D compressors using the BOG, and complemented with a LNG pump and vaporizer, provide the 300 bar gas fuel required by the engine,” Sejer Laursen said.

In the future, MAN Diesel & Turbo said it would use power take-off (PTO) from the ME-GI propulsion units to achieve a more environmentally friendly operation. The PTO is used during the vessel’s operation, except for maneuvering in harbors, when smaller auxiliary gen-sets are used. One of the gen-sets could be dual fuel operating on LNG or MGO. A second unit could be operated on HFO or marine gas oil (MGO).

“We see a future, where our PVU is the main source of gas fuel for the main engine and, if required, for auxiliary units,” Sejer Laursen said. “In order to control the BOG in the LNG tank we can use one small CT-D compressor to provide the 300 bar in parallel with the PVU, if needed for the BOG control.”