Ricardo has been appointed by UK-based rolling stock owner Porterbrook to provide engineering expertise for the integration of MTU’s hybrid powerpack into a converted Turbostar diesel multiple unit (DMU) train for the HybridFLEX project – a first in the UK rail industry.
The HybridFLEX program is designed to help eliminate diesel emissions from trains in built-up areas where there is no electrification of the rail network, with the HybridFLEX train operating in a “silent” mode using on-board batteries through urban areas and during station stops.
When diesel power is required for propulsion of the train it will be provided by an engine conforming to the latest EU Stage 5 emissions standards (due to come into force in 2021) with ultra-low particulates and NOx. Although EU Stage 5 is not currently mandated for rail, Porterbrook, Ricardo and MTU are committed to applying the latest technology today, reducing emissions in urban areas.
With the on-board batteries capturing the energy usually lost when slowing the train through braking – coupled with a more efficient engine and transmission – the overall CO2 emissions will be reduced by as much as 25% when the train enters service in 2020.
When the project was announced at Innotrans, MTU said the version for Porterbrook incorporates an MTU diesel engine plus an electric machine, which can be used either as an electric motor or generator and an MTU EnergyPack battery system, which stores the energy recovered during braking. This enables very low-noise, emissions-free battery-only electric operation in urban areas and around stations. Noise emissions in stations are cut by around 75% (20 dB(A)). Fuel consumption and CO2 emissions are reduced by up to 25%. NOx emissions can also be reduced by up to 70% and particulate emissions by around 90%. The total operating costs of rail vehicles with MTU hybrid drives are also significantly lower and even brake pads and discs experience reduced wear due to energy recuperation during braking, the company said. As a result of the additional power of the electric machine, train operators also have the option to improve journey times through better acceleration.

The initial trial period should also confirm the higher performance and capability of the hybrid systems compared to the standard variant of the Turbostar train.
Ricardo’s engineering team are performing all the integration engineering and safety assessments of the bare hybrid powerpack provided by MTU for the existing Turbostar train to convert this into the first HybridFLEX vehicle.
Ricardo will oversee the integration of all the mechanical, electrical and critical controls systems, committing teams from its Rail and Automotive divisions to support all the engineering tasks—and the relevant safety, certification and approvals activities—to help ensure the safe and successful operation of the train during public trials.
“We are looking forward to supporting Porterbrook throughout the development of this innovative and important project for the industry,” said Olivier André, UK MD of Consulting, Ricardo Rail. “The UK has many diesel vehicles on its network. This is an opportunity to show they still have a viable long-term future as hybrids, featuring reduced NOx, carbon and noise emissions as well as offering the potential for lower operating costs.”
The company said the project is a clear example of Ricardo’s cross-sector capabilities, utilizing its Automotive division, with their hybrids and electrical expertise in control systems, batteries and engines, to work alongside Ricardo Rail colleagues for the critical job of integration into the original vehicle.  This global experience of state-of-the-art hybrid programs in automotive and industrial is one of the key reasons Porterbrook selected Ricardo as chief technical partner for this project, the company said.
Once the completed trial confirms the expected performance advantages of the hybrid system, Porterbrook will work with existing and future Turbostar customers to evaluate conversion of these fleets to HybridFLEX, accelerating the move away from diesel-only trains in advance of the government’s 2040 target. 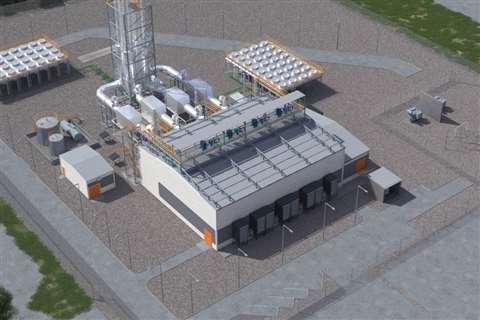