The project aims to accelerate the energy transition in Australia using gas that can be further decarbonized by using hydrogen and hydrogen-blended fuels.

EnergyAustralia has ordered one of GE’s 9F.05 gas turbines to power the Tallawarra B Power Station to help enhance the reliability of the energy grid and help ensure New South Wales (NSW) energy consumers have continued access to affordable, reliable, and sustainable power prior to the closure of the Liddell coal-fired 1680 MW plant located in the Hunter Valley region in 2023. The power plant will operate with high operational flexibility as a peaker plant—firing up rapidly when needed to stabilize the power grid during demand peaks—and it will utilize partial loads of hydrogen to decrease its emissions footprint.

“Our new open-cycle, hydrogen and gas capable turbine will provide firm capacity on a continuous basis and paves the way for additional cleaner energy sources to enter the system,” said Catherine Tanna, managing director of EnergyAustralia. “We are leading the sector by building the first net zero carbon emissions hydrogen and gas capable power plant in New South Wales.”

The NSW State Government and Australian Federal Government contributed AU$83 million to support the financial close and support the use of hydrogen. Under the funding agreement, EnergyAustralia will offer to buy green hydrogen up to 5% of the plant’s fuel use from 2025 and offset direct carbon emissions from the project over its operational life. 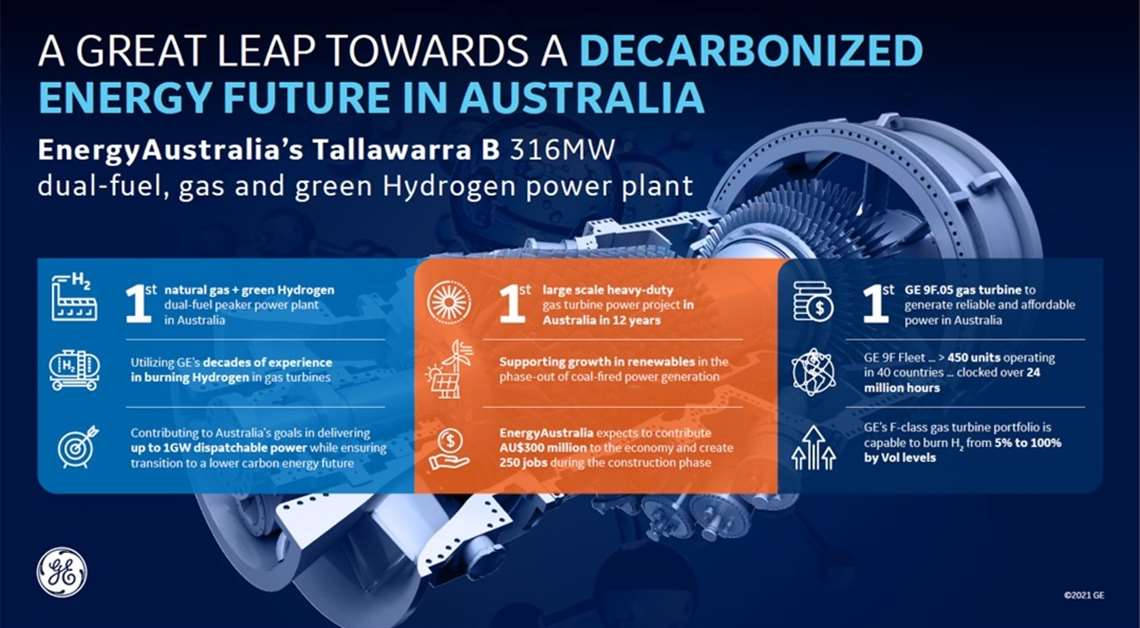 EnergyAustralia will also invest in engineering studies examining upgrades for Tallawarra B so that it can use more green hydrogen in its fuel mix in the future.

The 316 MW Tallawarra B Power Station will be built in consortium with the Engineering, Procurement and Construction (EPC) company Clough and will be adjacent to EnergyAustralia’s existing Tallawarra A 435 MW gas plant, located in Yallah on the western shore of Lake Illawarra in the state of New South Wales (NSW)—approximately eight miles southwest of the city of Wollongong.

With the forthcoming closure of the Liddell power station, the Australian Federal government called on the private sector to identify alternative solutions to deliver up to 1000 MW of dispatchable power to ensure a reliable transition to lower-carbon energy future.

“New South Wales’ Energy Security Target is the tightest reliability target in the country and this project will help make sure that we achieve that even after Liddell has closed,” said New South Wales Energy Minister Matt Kean. “This project sets a new benchmark for how gas turbine technology can be consistent with NSW’s plan to be net zero by 2050 by using green hydrogen and offsetting residual emissions.”

Tallawarra B will be the first first large-scale gas-powered power station built in NSW in more than 12 years, and the first project to use GE’s advanced 9F.05 gas turbine— its most advanced F-class technology for 50 Hz applications—in Asia. GE’s gas turbine portfolio has the capability to burn hydrogen levels from 5% (by volume) up to 100%. Having first entered commercial operation in 1991, with more than 450 GE 9F gas turbines orders since, GE’s 9F fleet has accumulated over 24 million fired hours in over 40 countries across Europe, China, Middle East, Asia and South America.

In addition, GE will supply a A78 generator, an exhaust stack with an innovate Plume Dispersion Device, a generator step up transformer, and the Mark* VIe control system and gas turbine accessories packaged in modules for the project, which will reduce on-site installation work while offering simpler and faster serviceability for the plant operator.

“GE is leading a decade of action to decarbonize the power industry, and our latest pilot project at Tallawarra B Power Station demonstrates the substantive role that gas technologies can play in reducing carbon emissions, ensuring reliable electrical supply, and fighting climate change,” said Scott Strazik, CEO of GE Power. “We are honored to work with EnergyAustralia to provide our hydrogen-ready gas turbine technology for this project. Once in operation at Tallawarra plant, this will be GE’s first 9F unit to operate on a blend of hydrogen and natural gas globally.”

The Tallawarra project is expected to contribute AU$300 million to the economy and create 250 jobs during construction.