Average age of facilities is 45

About 28%—producing 59 GW—of coal-fired power plants now operating in the U.S. will be retired by 2035, the U.S. Energy Information Agency (EIA) reports.

As of September, the U.S. has 212 GW of coal-fired electric-generating capacity, most of which was built in the 1970s and 80s, according to the EIA’s Preliminary Monthly Electric Generator Inventory. 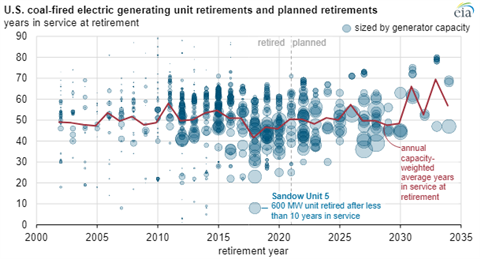 “The average operating coal-fired generating unit in the United States is 45 years old,” according to the EIA. “The units that have reported plans to retire are not necessarily the oldest ones operating; some units built in the 1980s and 1990s are also scheduled to retire. When they retire, the retiring units will have approximately 50 years of service, based on their planned retirement dates.”

Our Preliminary Monthly Electric Generator Inventory categorizes generating units that are installed and available to generate electricity as operating, regardless of how often they actually run during the year. The data also include a comprehensive list of coal-fired generators that have retired since 2002. Since 2002, around 100 GW of coal capacity has retired in the United States; the capacity-weighted average age at retirement was 50 years.