Equinor is a leading partner to decarbonize the Humber, the UK’s largest emitting industrial region. The Zero Carbon Humber (ZCH) partnership is developing several projects sharing CO2 and hydrogen infrastructure to deliver clean energy and power to industries in the region.

“Without CCS (carbon capture and storage) and hydrogen, at scale, there is no viable path to net zero and realizing the Paris goals,” Opedal said. “Our low-carbon projects in the UK build on our own industrial experience and will play a major role in setting the UK’s industrial heartlands in a leading position. The projects will also contribute to provide hydrogen and low carbon solutions to three to five industrial clusters by 2035. We will do so by working together with governments, partners and customers.”

Equinor is leading the H2H Saltend project, a first-of-a-kind 600 MW gas reformer that will produce hydrogen from natural gas with carbon capture. This will enable fuel switching by industrial users at Saltend Chemicals Park and the onsite Saltend Cogeneration Power Station switching to a hydrogen fuel blend. It will reduce CO2 emissions from Saltend by nearly one million tonnes annually.

The increased hydrogen ambitions involve a further 1200 MW of low-carbon hydrogen production, principally to fuel the Keadby Hydrogen power station. Equinor is co-developing the project with SSE Thermal, which could be the world’s first large-scale 100% hydrogen-fuelled power station. With appropriate policy mechanisms in place, Keadby Hydrogen power station could come online before the end of the decade. The flexible, low-carbon power production from this project will be key to supporting variable renewable power production, ensuring reliable access to electricity. 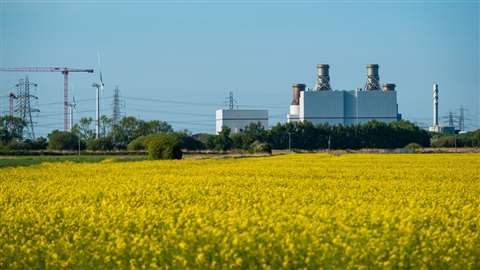 With its partners in the Northern Endurance Partnership, Equinor is also developing the offshore infrastructure to transport and store CO2 from projects in the East Coast Cluster. The ZCH onshore pipeline network, developed by Equinor and National Grid Ventures, will link H2H Saltend to the energy-intensive industrial sites in the region.

During his visit to Norway, Energy Secretary Kwarteng also visited Fortum’s waste-to-energy plant in Oslo. Subject to financing, this will be one of the two first industrial sites to capture and ship CO2 to be safely stored by Northern Lights, a joint venture between Equinor, Shell, and TotalEnergies to transport and store captured CO2 permanently under the seabed in the North Sea. The facilities are under construction and will be operational in 2024. Northern Lights is a major part of the full CCS value chain initiative by the Norwegian state called “Longship” and is an important step in delivering Equinor’s corporate ambitions. Initial capacity will be 1.5 million tonnes of CO2 per year. Subject to market demand, the capacity can be increased to 5 million or more in later stages of development.