Wärtsilä has received marine sector commercial certification for compliance with the EU’s Stage 5 standards. The Stage 5 legislation, which came into force in 2020, tightens restrictions on non-road engines and equipment, and sets stricter limits on emissions, especially particulate matter (PM) and nitrogen oxide (NOx) emissions. The certification applies to the total solution, including the Wärtsilä 14 engine and exhaust after-treatment system, and was received by Wärtsilä in September.

Stage 5 certification is required for engines powering the European inland waterways vessels, which together comprise a fleet of approximately 17 500 ships. The first deliveries of the certified Wärtsilä 14 engine will be for two new passenger ferries being built for the Swiss company General Navigation Co. (CGN) by Shiptec AG. The ferries will operate between Switzerland and France across Lake Geneva, with the first vessel expected to commence operations in December 2022. 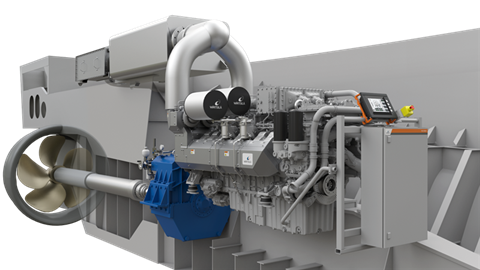 The Wärtsilä 14 engine with after-treatment systems has received commercial certification.

“This certification is an important step in Wärtsilä’s commitment to promoting greater environmental sustainability for shipping, and to achieving a decarbonized maritime sector. The fact that the Wärtsilä 14 marine engine has been so recognized is clear evidence of the technical developments achieved in support of these commitments,” says Johan Penninga, Account Manager, Wärtsilä Marine Power.

In addition to the Wärtsilä 14 engine itself, the key technology element is the new high-speed engine version of Wärtsilä’s NOx Reducer (NOR) system, which utilises selective catalytic reduction (SCR) technology, and a diesel particulate filter (DPF). The system was shown to have successfully demonstrated all required performance and functionality features by TÛV Nord, the official technical services provider. Final type approval was issued by Generaldirektion Wasserstrassen und Schiffahrt (GDWS).