A Big Addition For MAN 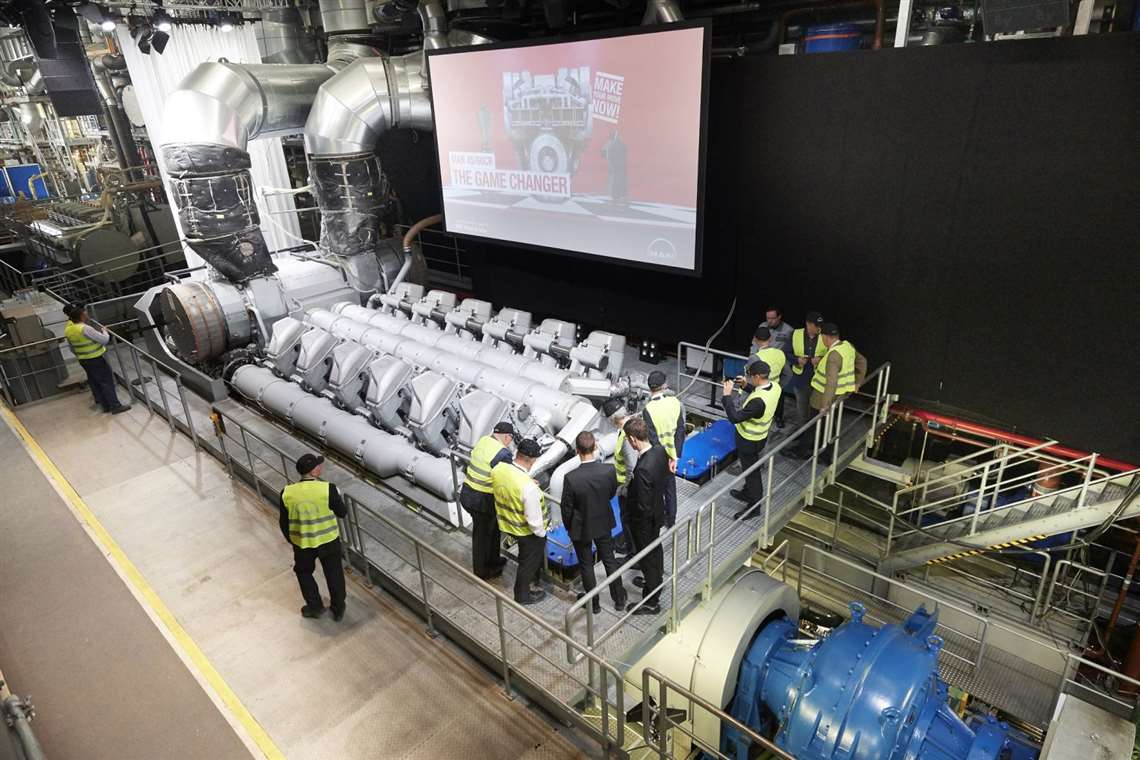 A brand new four-stroke, medium-speed engine family at the upper end of MAN Diesel & Turbo’s (MAN) liquid fuel range: the 45/60CR engines are at the top of the company’s engine lineup for power generation applications, with a maximum power of 26 MW, and in the upper end of the marine engine lineup with power outputs up to 18.2 MW at 600 r/min.

All engines in the 45/60CR engine family have a output per cylinder of 1300 kW (bore and stroke of 450 X 600 mm. The power generation versions will be available as 20-cylinder with 26 MW output power and as 12-cylinder with 15.6 MW rating. As for the marine engines, two vee-configuration and five inline configuration units will be available: the 14-cylinder vee and 12-cylinder vee are expected to be on the market from the end of 2020 (with power outputs from 15.6 to 18.2 MW) and the first inline units from 2022 (the whole inline lineup will include six-, seven-, eight-, nine- and 10-cylinders, from 7.8 to 13 MW power output).

The first prototype of the new engine family has been recently presented in an event at the MAN Diesel & Turbo’s testing center in Augsburg, Germany. The unit, a vee 12-cylinder, has been running on the test bed since March 2016.

The new engines feature MAN’s two-stage turbocharger technology, with an optimized adjustment for both low-pressure and high-pressure stages. According to MAN, this allows to improve fuel efficiency by 1 to 1.5% compared to single stage turbocharging.

These engines adopt MAN’s common rail fuel injection system, that has been utilized now for 10 years on MAN engines, and variable valve timing. The common rail system enables the engines to run on various maps without changing the hardware. A MAN tool for marine applications, called Ecomap, further allows to match the load profile and the engine map. This system has been first delivered to vessels in 2014, with the Carnival Vista cruise ship being the first to be equipped with it.

Ecomap offers to operators four engine maps to be selected while the ship is at berth or anchored (engine must be stopped). MAN’s advisory tool Ecoload can help to choose the most appropriate map, based on some input from the operator on the voyage profile for the upcoming period, emissions standard area (whether US Environmental Protection Agency Tier 2 or Tier 3), prices for fuel and urea and other boundary conditions. The final map selection per each engine is made manually by the operator.

Alexander Koerber, general project manager 4x-Engine  at MAN Diesel & Turbo, highlighted some of the key criteria that were considered in the design of the new engine family, such as reaching a low fuel consumption for better efficiency. The fuel efficiency of the 45/60CR running on heavy fuel oil (HFO) is over 50%, that is 3.5% better than in the MAN’s 48/60 engines. For the marine vee-configuration engines, the specific fuel consumption is measured at 166 g/kWh at 85% maximum continuous rating (MCR), which is the typical warranty point for fuel consumption in marine applications.

“Raising power density was also one of the main aims of the new design,” Koerber said. “The output power per cylinder has been increased by 100 kW compared to the current 48/60 engine family; at the same time, the 45/60CR engines’ dimensions are comparable with those of the correspondent 48/60 units. As an example, the 20-cylinder 45/60CR engine remains within the dimensions of the two-stage turbocharged 20-cylinder 48/60 unit.”

The design of the 45/60 family is compact and modular for ease of installation and maintenance, the company said. The units utilize less piping and cable harnesses instead of conventional wiring. All main connections are grouped on the counter coupling side, with cooling water on the one side and fuel and air on the opposite side; interfaces are located at the height of the engine base, with an inclination of 45°.

Another interesting novelty of this design is the integrated lube oil cooler and filter module, available as an option instead of the conventional separately-mounted modules. The fuel nozzle cooling water system—necessary for HFO operation—and a duplex fuel oil filter are integrated into the engine’s body as well.

Since the new engine family is meant for all applications whether marine or stationary power, one other important criteria to consider was derating, as explained by Koerber.

“We have been able to avoid derating for the 45/60CR family, up to 2500 m altitude and up to ambient temperatures of up to 53 °C, which is important for installations in remote areas and demanding climatic conditions,” he said.

One important thing to point out is that the 45/60CR engine family will also be available to run not only with liquid fuels but also with gas and in a dual-fuel version, at a later stage.

To overcome the complexity of managing a huge number of variants to accommodate various engine sizes, plus the specific characteristics of each application and fuel type, MAN has introduced a modular matrix design that is based on three major engine modules.

The rated speed of the 45/60CR family is 600 r/min (compared to the 500 r/min of the 48/60). For power and marine auxiliary applications, this is a major advantage for the required alternators.

As far as the marine segment is concerned, Sokrates Tolgos, MAN’s head of Sales Cruise & Ferry, said that focus applications for the new 45/60CR engines are medium-speed, high-power-demand vessels with an orientation to control lifecycle cost. Typically cruise vessels, RoRo and RoPax ferries, and dredgers.

In terms of fuel consumption, calculations by MAN showed that for a typical load profile of a cruise vessel, the operation of a MAN 45/60CR engine can bring fuel-oil cost benefits of 5 to 12% compared to a similar-size engine by a competitor. “For a cruise vessel of around 120 000 to 150 000 gross tonnage, with 60 to 65 MW of installed power and a fuel price of €500/ton, the annual fuel saving can be calculated into a total from €0.9 to €2.4 million,” Tolgos said.

Significant benefits are indicated also for power plant applications, where Stefanie Schatz, product manager for the new engine at MAN’s Power Plant Business, presented a plant efficiency calculation based on the comparison between 45/60CR and 48/60TS engines. “Thanks to the increased power density of the 45/60CR engines, the same power output can be reached with fewer cylinders and consequently less space,” Schatz said.

According to Schatz, a comparison based on a baseload power plant with 8000 running hours per year, €260/ton HFO price, and €0.08/kWh electricity selling price, shows a 6% lower operating expenses (OPEX) and 35% higher profit, with the break-even point on the investment coming 16 months earlier than with 48/60TS engines (depending on the type of financing).