A Cool Concept For Generator Sets 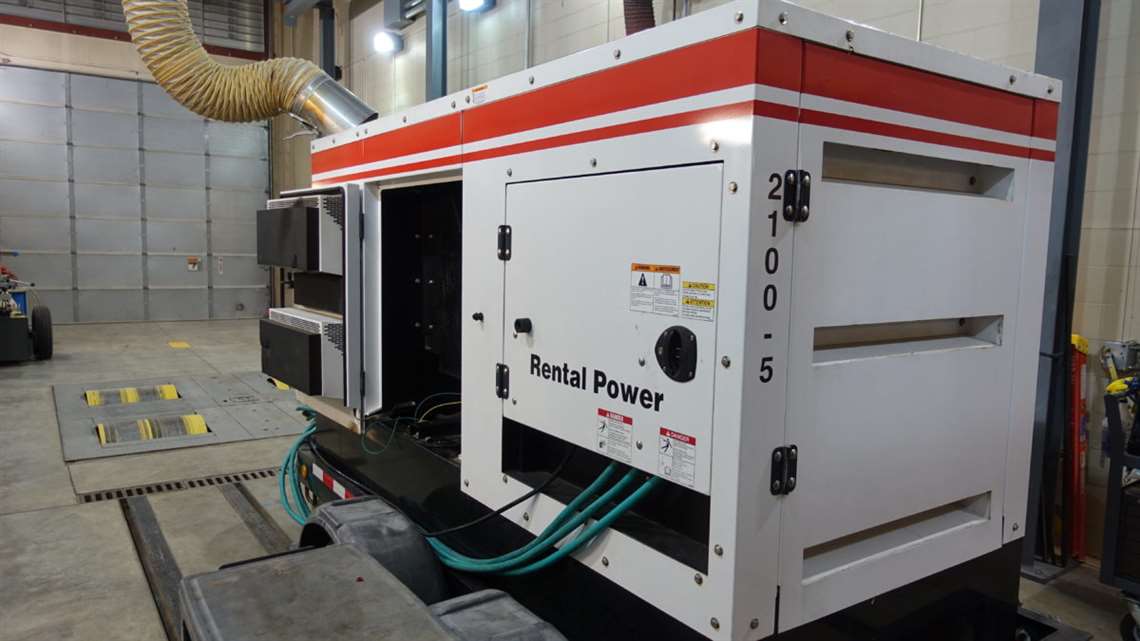 It’s not unusual for technologies to migrate from one market to another. In the case of engine-powered vehicles and equipment, emissions regulations and demands for reduced fuel consumption and quieter machines, have become important considerations across most applications. Thus, the solutions that work in one segment gradually make their way into others.

One of the latest examples is variable fan drive systems. Long a staple in medium- and heavy-duty vehicle markets, over the last few years, fan drive system have become more widely used in off-highway vehicles and equipment. Even more recently, manufacturers and users of stationary and mobile generator sets have begun to look at fan drive systems as a way to meet growing requirements for improved fuel economy, reduced engine emissions and noise reductions.

Tests were conducted in the company’s facilities, which allowed load and ambient temperatures to be held constant and other variables — fan blade design,  material, etc. — to be eliminated to the greatest extent possible.

While engines used in generator sets are often seen as having a relatively easy duty cycle, in reality they face their own unique challenges. As with virtually all off-road engines, the use of advanced combustion technologies to achieve more stringent emissions regulations such as the EPA’s higher emission levels, such as the U.S. Environmental Protection Agency’s (EPA) Tier 3 and Tier 4 standards, has led to increased heat rejection from engines. This has generally necessitated the use of larger cooling systems engineered to handle the worst-case operating scenarios — operating at 100% of rated capacity at the highest of ambient temperatures.

While machines do sometimes operate in such conditions, the reality is that in most cases, machines operate well below that level most of the time. Thus, the cooling systems are frequently significantly oversized.

In addition, gen-sets are rated based on operating conditions. The highest ratings are for standby or emergency operation, while prime power and continuous power ratings are much lower, but are geared towards significant operational hours. As a result, cooling systems on units primarily targeting standby applications are oversized for prime power or continuous duty operations. These operational conditions are regularly encountered by rental generators used at construction sites and public events, gen-sets used for peak-shaving and off-grid power plants operated by independent power producers (IPP).

Another downside of running the cooling fan at a constant speed in a gen-set is that in cold weather, it can result in overcooling of the engine. When the engine and associated subsystems are unable to achieve sufficient temperature for proper combustion and optimal engine performance, it can lead to problems such as plugged diesel particulate filters (DPFs), engine wet stacking and frozen crankcase breathers. Such issues can not only degrade performance, but can lead to increased downtime and reduced engine life.

Finally, a significant proportion of the noise produced by a gen-set can be attributed to the radiator cooling fan. High noise levels can be a safety concern for personnel working in proximity to the unit and fan noise is typically perceived as nuisance, especially in densely populated areas.

The technology behind Horton’s fan drive technology has evolved significantly over the years. In the 1970s, on/off fan drives — a mechanical clutch that would either completely disengage the fan or engage it at full engine speed — essentially became the standard for heavy- and medium-duty trucks. Over time, the technology was refined toward multi-speed drives incorporating spring-engaged/pneumatically-disengaged friction-based clutches that provided either full or reduced fan speeds.

Most recently, fully variable viscous fan drives have become the benchmark because of their inherent capability to spin the fan at any speed based on cooling requirements. Additionally, the use of viscous fluid for power transfer eliminates the need for friction liners and renders viscous drives virtually maintenance free.

In a previous, less formal study, Horton tested its variable fan drive system on a 200 kW Cummins generator set with a QSL9 engine. In this case, the load constant was maintained at zero and the fan speed was varied using an external controller for set intervals. That testing indicated that using a fan drive to adjust the fan speed resulted in significant fuel savings and noise reduction over the standard-equipped generator set. Yet Horton realized to ensure strong correlation between the results and actual running conditions, it needed to modify the generator set loads and not the fan speed.

The Cummins C100D6R gen-set used in the latest analysis is driven by a 4.5 L, turbocharged and charge-air cooled, QSB5-G4 Tier 3 diesel engine. The unit’s maximum standby rating was 100 kW, with a prime power rating of 90kW at 60 Hz.

Two series of tests were conducted, both measuring fan speed and fuel consumption. Noise testing was conducted separately, based on data captured in the two primary tests.

The tests were conducted on the generator as originally equipped, with the exception of the original fan being replaced by a Horton MS9 fan in order to yield similar airflow performance and reduce overhung weight on the engine. That change was made in an attempt to eliminate as many testing variables as possible. The fan was operated by a belt and pulley mechanism driven off the main drive shaft of the engine. All measurements were taken with the enclosure closed.

The second set of tests was conducted with a modified cooling system in which the direct-drive fan mechanism was replaced with a Horton LCV 40 fan drive. The drive was affixed to the engine block using a Horton bracket. The radiator and related components remained the same. Again, the measurements were taken with the cabinet closed.

Fuel consumption data was computed using consumption information broadcast by the engine control unit over the CAN link. The fuel economy testing was conducted in a chassis dynamometer room at Horton and noise measurements were conducted on a flat asphalt surface in an open area behind the Horton Technology Center, remote from any structures.

The first test lasted approximately five hours, with an hour devoted to measurements at each load factor and load factors ranging from zero to 100% at 25% increments. The initial ambient temperature in the test cell was 67° F (19°C) and was maintained with little fluctuation. In the second test, all the parameters and procedures were held constant, save that the starting ambient temperature set and held at 87° F (31° C).

For the third and fourth tests, the gen-set was modified with Horton’s fully-variable LCV 40 fan drive cooling system. The unit was again operated under the same load conditions at the same ambient temperatures.

Fan speeds were captured at all loads for both the direct-drive fan and the modified Horton fan-drive configuration. Since it is possible to regulate/control the fan speeds in each configuration manually for test purposes, the sound level tests were be done independently, with noise levels measured from a fixed point of 7 m. from the back, front and sides of the gen-set.

Despite a less than ideal installation — it was later found that the Horton fan system was not positioned optimally in relation to the fan shroud, which had a negative impact on cooling performance — Horton said the testing still indicated that the variable fan system provided significant improvements in the fuel economy and noise levels of the generator set.

In the lower ambient temperature test, the system provided a 16% fuel savings over the non-modified generator set. As load increased, the improvements moderated, but were still significant — 9% at 25% load, 4% at 50% and 6% at 75%.

In both the high and low temperature testing, there were no fuel economy gains at 100% load and in the high temperature tests, there was also no improvement at 75% load. Horton said it believed some of the high-load results were negatively skewed by of the sub-optimal fan installation.

The low temperature testing suggested that generators operating in below 60°F (16°C) ambient conditions would benefit by having a fully-variable fan drive cooling system, Horton said. Not having a constant fan load on the engine would contribute to fuel savings and could also prevent overcooling, thereby contributing to optimized uptime and performance.

Noise testing indicated that the most significant noise level improvements were seen in front of the gen-set (where the fan is located). At no load, the fan drive system reduced noise output by as much as 6.9 dB(A) over the non-modified gen-set. Noise output was down 5.9 dB(A) at 25% load, was 2.5 dB(A) less at 50% load, 1.1 dB(A) reduced at 75% load and 0.6 dB(A) down at full load.

Horton said the results of its study indicate that diesel-driven generator sets of all sizes could benefit from application of fully-variable fan drives, with the levels of fuel economy and noise improvements a function of the specific gen-set application and environment.

For example, the company noted that an emergency backup power system at a data center would probably not see significant benefits because of the relatively infrequent use of the gen-set. However units used in rental or prime power/IPP applications could benefit from having fully-variable fan drives as standard equipment.

Horton said it was planning to conduct similar testing with different generators and applications, including cold-climate environments.