A First In The Americas For MTU 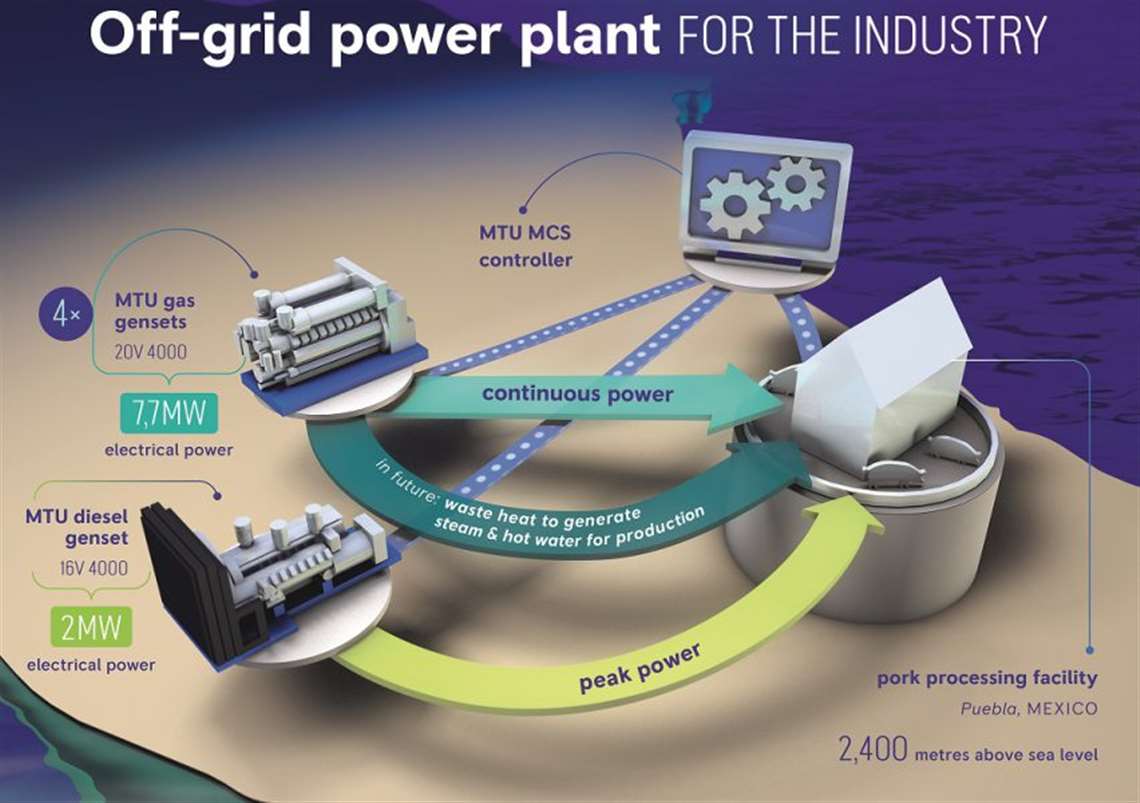 Rolls-Royce will supply MTU Onsite Energy generator sets for the power plant of a new pork processing facility in Mexico.

The power plant is supported by four MTU Onsite Energy Series 4000 gas generators and one MTU Onsite Energy diesel generator under one overall control system. The site is not connected to the grid; therefore, the power solution is completely independent. This is the first off-grid solution of its kind in the Americas for MTU, the company said.

Local distributed energy systems expert, Electriz, S.A. de C.V., was awarded the business, leading engineering, procurement and construction for the project, as well as operation and ongoing maintenance of the power plant. Electriz’s ability to customize and deliver highly-efficient systems was a success factor to win the project.

“As the customer has to rely 100% on his own grid, the challenge was to deliver a complete solution which ensures grid stability on a high level,” said Alfredo Carrasco, Latin American senior sales manager of MTU Onsite Energy gas power systems. “Therefore, the reliability and efficiency of the MTU Onsite Energy systems were major factors in the decision of the customer. The ability of the team to meet the customer’s stringent requirements of gas, diesel and an integrated control system from a single supplier also contributed to us being awarded this project.”

The four gas units are 20-cyl

inder Series 4000 natural gas systems delivering all together 7.7 MW electrical power, capable of handling the pork processing facility’s altitude of 8000 feet above sea level with the lowest derating, ensuring maximum power availability at the site, according to the company. In a second phase, it is planned to use the heat out of the exhaust gas, the oil cooler and the mixture cooler to produce steam and hot water which can be used in the production processes.

A single 16-cylinder Series 4000 diesel generator system with an electrical output of 2 MW is tasked with absorbing greater load blocks than the natural gas units, offering long-term stability to the power plant. The diesel unit will run continuously with loads as low as 10% to minimize fuel consumption, allowing the natural gas units to produce more energy. MTU Onsite Energy’s MCS master control panel integrates plant control and remote operation, and all systems run in isolation from the power grid, providing electrical power to the entire facility.

The pork processing facility, located in Puebla, Mexico, features a power plant that will operate using three different fuel sources, including biogas from livestock waste in a later stage. With the help of the flexible MTU Onsite Energy systems, the plant will have the ability to double its power capacity in the future. The customer already owns and operates a combined heat and power (CHP) plant at a nearby facility using a medium-speed gas generator unit from Rolls-Royce.