A New Class Of Gas Turbines 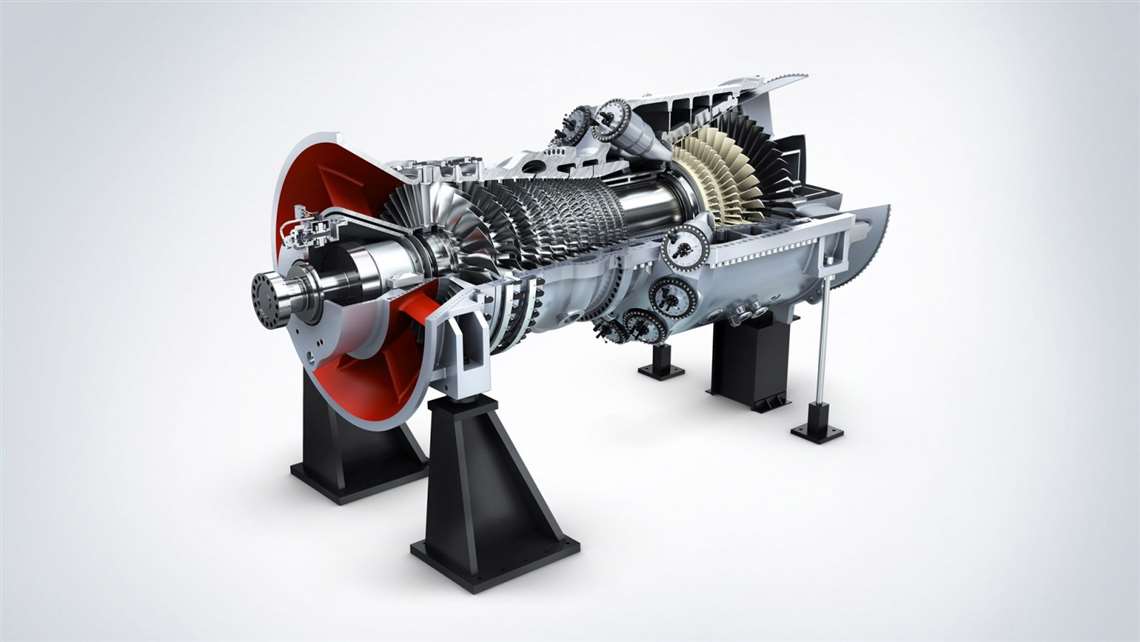 Siemens unveiled its new HL-class, the next generation of larger air-cooled gas turbines that represents a push for higher power plant efficiency – a must for operators nowadays – with the gas turbines realizing more than 63% efficiency in combined-cycle operation, and moving towards the 65% mark.

Siemens HL-class is an evolutionary development step derived from the proven Siemens H-class turbine technology and will be composed of three engines: SGT5-9000HL and SGT6-9000HL for 50- and 60-Hz applications respectively, and SGT5-8000HL for the 50-Hz market only.

The SGT-9000HL model has an output capacity of 545 MW for 50 Hz and 374 MW for 60 Hz, while the SGT5-8000HL delivers 453 MW in simple-cycle operation. Compared to Siemens’ existing H-class models, there is an increase of 2% efficiency in combined-cycle operation and a 25% higher power output.

Karim Amin, Siemens’ president global sales, expressed the opinion that larger frames will play an important role in the future worldwide energy mix. Flexibility will be a must in balancing the fluctuations coming from the increased use of renewable sources, and the HL-class gas turbines have a ramp up of 85 MW per minute in simple cycle.

As for the starting regime, an improved starts interval was achieved – at 1250 equivalent starts (ES) compared to 900 ES for the SGT-8000H series – before the first combustor inspection, meaning that these turbines can easily accommodate various customer dispatch regimes.”

Guido Schuld, Siemens’ product family owner large gas turbines, pointed out that at the basis of the HL-class development  was a cross-functional group of people gathered together from all Siemens’ departments to bring in the best capabilities and perspectives. “Unlike the usual procedure at Siemens, this mixed group of people together contributed to the development of a new turbine class,” said Schuld. “For example, we looked at new ways of manufacturing, but analyzed also which technologies will likely be available in five or six years from now, and made sure these turbines are ready to incorporate these new production technologies. People from manufacturing and colleagues from technology & innovation were key in these assessments.”

These turbines are also designed to plug-in to Siemens digital offering via connectivity to MindSphere, the company’s open, cloud-based operating system for the Internet of Things.

The HL-class blended experience from the H-class engines with new technologies that touch practically all the parts of the engine. And, most important, the technology experience gathered with HL-class will in future be used across the entire Siemens portfolio.

For these turbines, Siemens is confirming its air-cooled design and single tie-bolt rotor with internal cooling air passages. With this rotor design, the disc assembly with Hirth serration and central tie rod allow to easily de-stack the rotor on site.

On the compressor side, the third generation compressor design saw a reduction in stages (only 12 stages compared to the 13 of the H-class units), and one variable-inlet guide vane with two stages of variable-pitch guide vanes (VGV) for reduced complexity. The 3D-compressor blades are all replaceable without rotor lift or rotor de-stacking.

It is important to note that the three engines in the HL-class have a smaller footprint than the SGT-8000H series turbines, despite their 25% higher power output.

On the turbine side, combustion was one major area for development and the HL-class turbines inherited the platform combustion system from the H-class but with significant improvements. The new Advanced Combustion System for higher efficiency features a pilot burner surrounded by 25 premix flames (where the H-class had only eight). “This improves the fuel/oxygen mix to ensure low NOX emissions at higher firing temperatures, while reaching more operational flexibility, so that we can reach part load capability down to 30%,” Schuld said.

With higher combustion temperatures (the HL-class has about 100 Kelvin higher firing temperatures than the H-class), blades and vanes must be better protected. “There are basically two ways,” explained Schuld. “You either improve cooling or increase the protection of the components.”

Siemens chose a combination of the two and went for an improved cooling of the blades and vanes thanks to very sophisticated internal cooling channels, a technology incorporated with the acquisition of a license for Tomo tooling and casting technology from the US-based high-technology manufacturing specialist Mikro Systems.

Besides that, the company implemented an advanced thermal barrier coating: a ceramic material with laser engraving for blades and vanes. “With laser engraving  technique, the thermal coating is thinly cut in squares to reduce thermal stresses and avoid spallation,” said Schuld. “Spallation often happens during commissioning activities, when small metal pieces can come in the engine and, at the first engine’s start, they melt and get plastered on the row one vanes; to avoid this problem row one vanes now feature a sacrificial layer which is dissipated within the first couple of hundred hours of operation, together with the undesirable metal deposits. What is left is the proper original thermal coating.”

An improvement was introduced also for turbine blade 4, which is a free-standing, internally-cooled blade. This allows a better handling of higher exhaust temperatures and a simpler servicing, as these blades (together with blades stage one) can be replaced without cover lift.

As with its H-class turbines, Siemens chose Hydraulic Clearance Optimization (HCO) for the bearings in order to reduce clearance losses and hence improve engine performance.

Similarly to what is done with all its gas turbines, Siemens will carry out a thorough testing and validation process. Component testing has been performed at the Siemens Clean Energy Center close to Berlin, Germany – Siemens-owned test facility for gas turbine components. Full scale system tests, e.g. burner system, were also carried out at the Siemens Berlin Test Facility in the German capital. Validation though, was not possible at the Berlin test facility because of the turbine size and power output.

Therefore Siemens signed an agreement for the testing and validation of the new HL-class under real conditions with Duke Energy, Charlotte, North Carolina, USA. The unit will operate in DukeEnergy’s Lincoln County Combustion Turbine site and be 25% more efficient than the 16 gas-fueled simple-cycle turbines currently on site, Siemens said.

Construction at the Lincoln site is expected to start as early early as mid-2018  with gas turbine testing beginning in 2020.