Hyunda Engine & Machinery Division, HHI-EMD, will build the engines. The order contains an option for a further four engines with the first of the confirmed vessels due to enter service in the first quarter of 2024.

“This is a massive milestone as these engines will be the largest methanol-burning engines ever constructed,” said Bjarne Foldager, senior vice president and head of Two-Stroke Business, MAN Energy Solutions. “They will be based on their well-proven 50-bore counterpart, which has already been in our engine portfolio for some time gathering more than 100 000 running hours on methanol alone. The 95-bore’s development is another example of our commitment towards decarbonization and providing solutions demanded by the market.”

MAN Energy Solutions states that the new engines will be capable of burning bio-methanol as well as e-methanol. 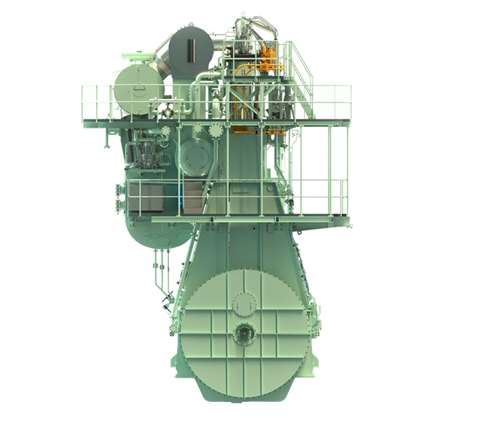 The new order closely follows that from July 2021 when MAN Energy Solutions won the order to supply the world’s first, low-speed, dual-fuel engine to run on methanol within the container segment – a MAN B&W 6G50ME-LGIM type built by HHI-EMD – to a 2100-teu vessel also ordered at Hyundai Mipo Dockyard by A.P. Møller – Maersk.

“As a fuel, methanol is quickly becoming an option within the large container-vessel segment where – up until now – conventional fuel and LNG have long reigned,” said Thomas S. Hansen, head of Promotion and Customer Support, MAN Energy Solutions. “We expect that this significant order will spur further market interest in methanol as a fuel, also within other ship segments such as bulkers. Our other ME-LGIM references show methanol to be a clean, efficient and safe, marine fuel that offers a clear path to decarbonization through significant greenhouse-gas reductions when produced from renewable energy sources.”

Møller-Mærsk said more than half of its 200 largest customers have set – or are in the process of setting – ambitious science-based or zero-carbon targets for their supply chains. As part of A.P. Møller-Mærsk’s ongoing collaboration with customers, corporate sustainability leaders including Amazon, Disney, H&M Group, HP Inc., Levi Strauss & Co., Microsoft, Novo Nordisk, The Procter and Gamble Company, PUMA, Schneider Electric, Signify, Syngenta and Unilever have committed to actively use and scale zero-carbon solutions for their ocean transport, with many more expected to follow.

Maersk said it will operate the vessels on carbon-neutral e-methanol or sustainable bio-methanol as soon as possible. The company said sourcing an adequate amount of carbon-neutral methanol from day one in service will be challenging, as it requires a significant production ramp-up of proper carbon neutral methanol production, for which Maersk continues to engage in partnerships and collaborations with relevant players.

Additional capital expenditure (CAPEX) for the dual fuel capability, which enables operation on methanol as well as conventional low Sulphur fuel, will be in the range of 10-15% of the total price, the shipping company said.

The new vessels come as part of Maersk’s ongoing fleet renewal program and will replace tonnage of more than 150,000 TEU which is reaching end-of-life and leaving the Maersk-managed fleet between 2020 and Q1 2024.

CAPEX for the announced vessels is included in current guidance for 2021-2022 of USD 7bn. Maersk further reiterates its strategy of maintaining a fleet capacity in the 4.0 to 4.3 million TEU range, as a combination of Maersk managed and time-chartered vessels.

About the MAN B&W ME-LGIM engine

MAN Energy Solutions developed the ME-LGIM dual-fuel engine for operation on methanol, as well as conventional fuel. The engine is based on the company’s proven ME-series, with its approximately 5000 engines in service, and works according to the Diesel principle. When operating on methanol, the ME-LGIM significantly reduces CO2, greenhouse-gas, particles, NOx and SOx emissions.

Additionally, any operational switch between methanol and other fuels is seamless. Tests on the engine, when running on methanol, have recorded the same or a slightly better efficiency compared to conventional, HFO-burning engines.

MAN developed the ME-LGI engine in response to interest from the shipping world in operating on alternatives to heavy fuel oil. Methanol carriers have already operated at sea for many years using the engine, and, as such, the ME-LGIM has a proven track record, the company said..