Bergen Engines said it has been able to test a B-Series Bergen gas engine running on a blend of 15% hydrogen and 85% natural gas without any hardware adjustments to the engine.

According to the company, the power output was maintained according to specification at all load levels while the carbon dioxide and carbon monoxide emissions were reduced. The lower unburned hydrocarbon levels and methane slip are also proven.

“This is a great first step in the decarbonization of our customer’s operations and a testament of the high fuel acceptance capability of our Bergen engines,” said Jon Erik Røv, managing director of Bergen Engines. 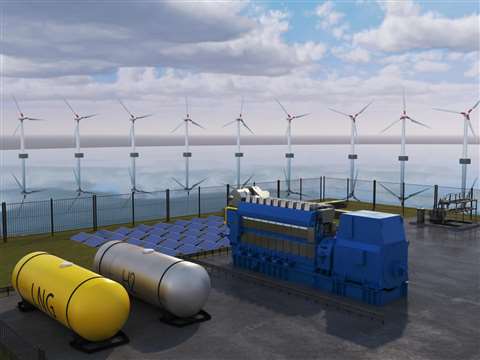 Hydrogen is considered by some to be the best-suited energy carrier for renewable fuel production for land power generation, short sea and inland navigation. A blend of hydrogen and natural gas as fuel is a first step towards zero carbon emissions.

Bergen Engines is aiming to have a commercial solution in the market that will accept hydrogen content of up to 60%, and solutions that can be further developed to accept 100% for new engines.

The aim is for its current gas engine fleet to take low levels of hydrogen without any hardware changes. When there is viable access to green hydrogen, the intention is that the Bergen engines are ready and mature with higher levels of hydrogen. An applicable engine upgrade may be done as part of a main service revision that includes piston replacement, so that a portion of the expense can be offset into the normal service cost.