The Large Engine Competence Center (LEC) in Graz, Austria, is a company born as a spin-off from the Graz University of Technology and focuses on green energy and transportation systems.

LEC was founded to comply with the COMET Programme (Competence Centers for Excellent Technologies) of the Austrian federal government, financed by the Federal Ministry for Climate Action, Environment, Energy, Mobility, Innovation and Technology, as well as the Federal Ministry of Labour and Economy.

COMET centers, such as the LEC, are tasked with developing solutions for key challenges such as climate protection, digitalization, mobility, health and energy for a sustainable future. They are called to perform cutting-edge scientific research in cooperation with universities and other research institutions, as well as industrial research with applicable results for the company partners. In the case of the consortium led by the LEC, some of the company partners include industry heavyweights such as INNIO, AVL, WinGD, Accelleron, Bosch, OMT, Kistler and Hoerbiger.

Prof. Andreas Wimmer of the Graz University of Technology is head of the LEC and talked to Diesel & Gas Turbine Worldwide about the research projects the company is carrying out.

One of the most recent achievements concerns the testing of ammonia combustion concepts. According to Wimmer, the LEC is one of the world’s first research institutions to commission and operate ammonia fuel infrastructure on engine test beds.

Three out of six test beds at the LEC are already capable of conducting research on ammonia combustion of large bore engines. Therefore, the infrastructure has been equipped with a 2000 kg mobile tank container to store the ammonia that is supplied as a fuel to the engines on the test bed. The upgrade of the remaining test beds is already in preparation.

Since the LEC is investigating all types of fuel admission and combustion concepts, the fuel supply infrastructure features both a low-pressure and a high-pressure (up to 1600 bar) ammonia system.

The operation of the test beds requires the highest standards of safety but also a specially designed exhaust gas aftertreatment system to deal with pollutant emissions and to treat ammonia slip. “Our test beds are allowed to emit only up to 5 ppm of ammonia, so a lot of effort was put into the aftertreatment system specified for the test bed,” said Wimmer. “It is a temperature-controlled selective catalytic reduction and an ammonia slip catalyst. Advanced sensors are also installed to monitor ammonia and nitrogen oxides before and after the catalyst.”

The LEC is working on the combustion of a number of other fuels beyond ammonia. These include conventional fuels, as well as methanol and hydrogen.

“The level of research and engine technology related to hydrogen is already quite advanced,” said Wimmer. “For example, in 2020, INNIO already installed a Jenbacher engine in the 1 MW power class at the HanseWerk Natur’s combined heat and power plant in Hamburg, Germany. 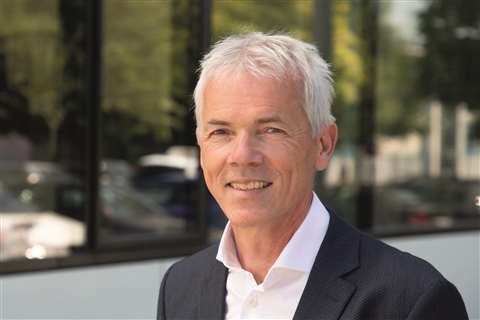 “It is quite a tough task to optimize combustion with ammonia.” - Prof. Andreas Wimmer, head of the LEC (Photo: Large Engine Competence Center)

“The unit can run on 100% natural gas as well as 100% hydrogen and any natural gas/hydrogen mixture in between. The technology is already quite established, but we are still working on improving the engine performance – in particular, in terms of efficiency and high load capability. The goal of our research program is to achieve the same performances with hydrogen as with natural gas.”

Wimmer added that research on methanol is quite advanced, as well.

Research on ammonia is still at an early stage, Wimmer said. “It is quite a tough task to optimize combustion with ammonia,” he said, adding that dual-fuel engines are demonstrating a good compatibility in this respect. “Dual-fuel engines are the preferred approach for marine applications as they offer a very robust combustion process, and the diesel-only operation provides a reliable backup solution in case of emergency.”

Initial LEC tests with external admixtures of ammonia showed that a substitution rate of about 80% to 90% is achievable without significant disadvantages. Further optimization of the combustion concept will aim to reduce the required diesel share.

Wimmer explained that a nearly 100% ammonia-fueled engine is also being targeted as a spark-ignited combustion concept. However, the LEC foresees that it will be necessary to crack some of the ammonia to produce hydrogen and use it as an accelerator for the combustion.

“Ammonia is also considered for seasonal energy storage,” Wimmer said. “With excess energy produced by renewable sources and with hydrogen storage capability being somewhat limited, it would make sense to use hydrogen to produce liquid e-fuels such as ammonia that can be stored for several months in a proper way.”

LEC is also working on carbon capture systems that allow for capture of CO2 emissions from ships or power plants. “This research presents a few challenges, as well,” Wimmer said, “especially in ships which have to accommodate storage capacity for the captured CO2 and for harbors which have to implement the infrastructure to handle CO2 and transport it to where it can be used in the production of e-fuels.”

The LEC’s HyMethShip concept is a pre-combustion carbon capture system that uses methanol as a hydrogen carrier to store the energy needed for onboard propulsion of ships. (Photo: Large Engine Competence Center)

A very promising approach from this research area is the HyMethShip concept, which is a pre-combustion carbon capture system. The concept uses methanol as a hydrogen carrier to store the energy needed for onboard propulsion of ships. Based on a membrane reactor, the system separates the hydrogen, which is used for engine operation, while the remaining CO2 is liquefied and stored onboard using the same tanks used for methanol. When the ship docks, the CO2 can be discharged and used to produce methanol again, thus closing the CO2 circle.

“This is a very efficient process because all the energy you need for the reforming process can be covered by the exhaust heat from the engine,” Wimmer said.

The target set by the LEC for this project is to reduce CO2 emissions by 97% and NOx by 80%, while increasing the system’s energy efficiency by 45%. A technical demonstrator in the 1 MW power range has been set up at LEC and showed that the entire system can be a suitable solution for marine applications.

“The next step is a further optimization and to finally install the system on a ship,” Wimmer said. 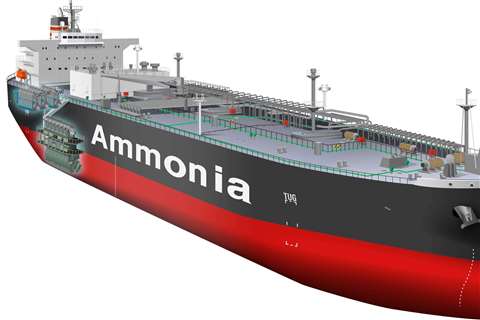 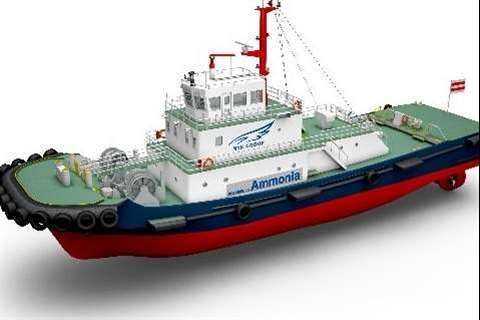 Ammonia-fueled tug gets AiP
First such designation for a tugboat