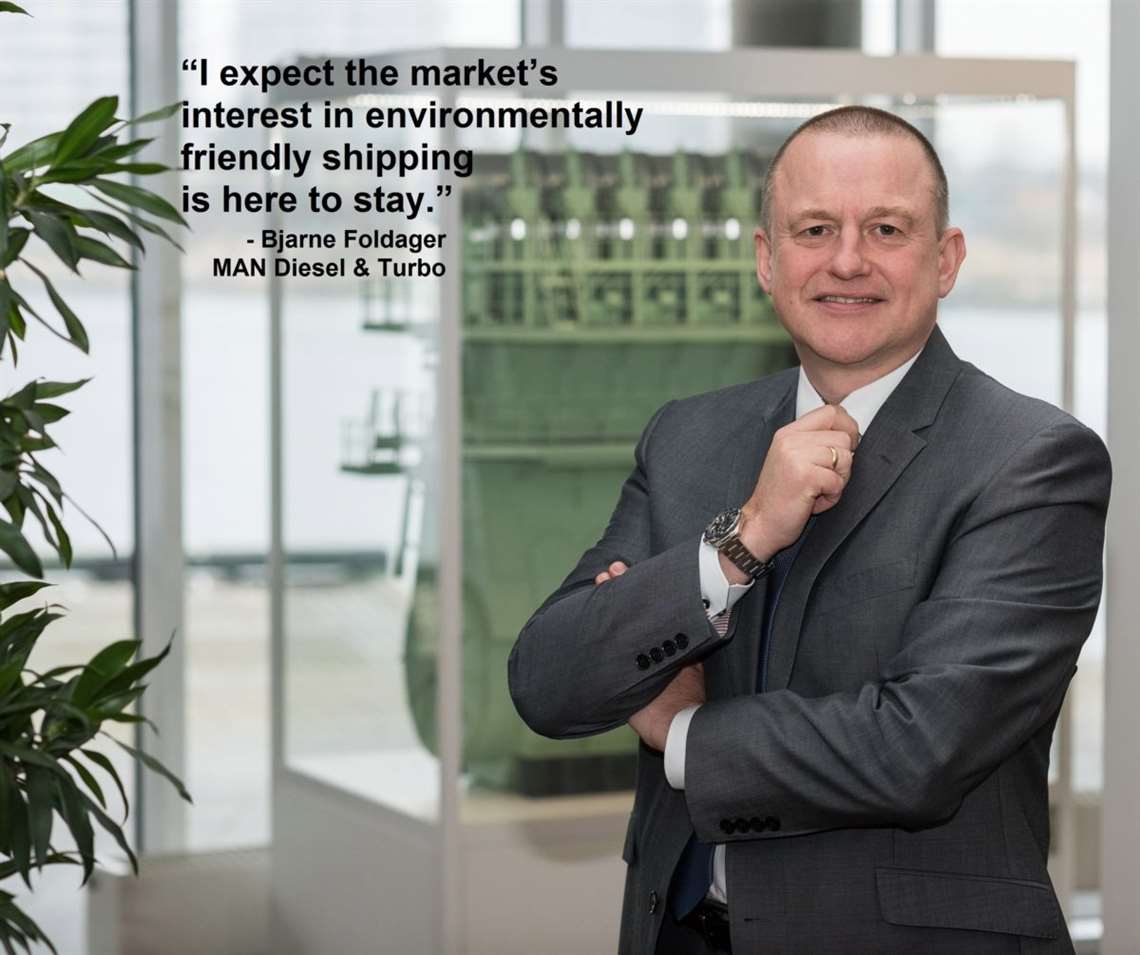 DGTWW: What do you see as the challenges and risks in the marine market, especially in light of possible environmental changes that may occur because of a new administration in the USA?

Foldager: I expect the market’s interest in environmentally friendly shipping is here to stay. There is a growing request from customers to buy products with a good environmental footstep. The marine operators are all dependent on good business and today good business is to operate in a clean way.

DGTWW: What do you see as a most important development focus for your company today and in the foreseeable future?

Foldager: There are today two major and dominating trends within the shipping industry which are de-carbonization and digitalization. The de-carbonization is very much forced by legislation and means that you make the operation more independent of the fuel variations during a route.

We see the use of various gas compositions as a major interest here and also the ability to change between fuels and also from fuel to gas and liquid gas and back. This is a focus for our company’s engine developers.

Digitalization is making shipping smarter and more efficient and will concern the equipment installed in a ship — the operation and condition-based maintenance of engines being one example of an area where we are involved. Digitalization will also be used to make routing and speeds of a vessel more optimal and also how to load the vessel in a most efficient way. An important issue is to make the data transmitted between the actors safe and secure. We are currently building up a digitalization model.

DGTWW: You are cooperating with engine manufacturers in several countries, many of which are located in the northern Asia. What changes do you see taking place with them and the shipbuilders in that region?

Foldager: The major users of two-stroke propulsion engines for new buildings are found in South Korea, China and Japan and 95% of the engine builders are found there.

Among the shipbuilders of large vessels the competition is fierce and there is clearly an overcapacity among the yards. There have been a number of mergers between several of the larger shipbuilding companies as a way for them to survive.

DGTWW: With what appears to be a changing focus on emissions in the USA, how do you see the market developing in terms of vessel type —tankers, containers, cruise ships, etc.? And how has the sale of two-stroke propulsion engines developed over the last years?

Foldager: It is not only the U.S. policy changing the market of shipping, but also a kind of cycle, which we have seen over decades.

The new building activity for tankers, bulkers and container ships building is low, but some light is currently seen within the merchant vessel market. And the beginning of 2017 has actually looked better regarding the tanker market with some activities in the Far East. Also in recent weeks the bulker market seems to have woken up and orders for vessels are being placed.

The engine orders intake during 2016–17 has not been historically low — although during the second part of 2016 the order intake almost stopped.

MAN Diesel & Turbo works closely with our engine licensees and with the yards. The trust in our company and products is most important and we keep focusing on helping and guiding our clients and partners.

DGTWW: Looking at the aftermarket, are there opportunities for retrofitting engines with new technologies to make them better suited to today’s environmental and economic requirements?

Foldager: The retrofit market within the shipping industry is conservative, but with legislation demanding lower emissions, there will be a need to change and improve faster. Over the years we have introduced many retrofit solutions and some of them, like the slide valve introduction, offered an extremely short payback time.

DGTWW: What is your R&D focusing on and what are the key engine developments you think are needed for the future?

Foldager: I have already mentioned de-carbonization and digitalization, but I would like to come back to the importance of multi-fuel engines in tomorrow’s shipping world. In addition to LNG we offer today engines for operation on methanol and ethane and will have an LPG fueled engine available later this year. Also volatile organic compounds will be used in the future.

Another focus we have is to widen our scope to offer complete solutions to our clients, not only the engine itself. Eventually I would also like to mention an increasing interest seen regarding hybrid propulsion solutions.