The company said the InteliGen 1000 represents a culmination in everything that ComAp has learned about power generation control in the last 30 years.

“Its developers had three key values in mind right from the beginning of its design: powerful hardware, communication possibilities with a great focus on cybersecurity, and flexibility,” the company said.

InteliGen 1000 is designed for a range of applications, from a simple single gen-set application up to complex applications including grid connections, virtual power plants, demand response, or spot price dispatch. 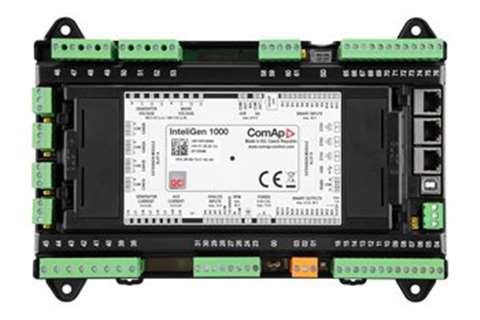 The InteliGen 1000 is around 20 times more powerful than its predecessor - InteliGen NTC BaseBox - and is able to handle both critical and non-critical tasks at the same time, the company said. The controller can communicate with a large number of connected remote devices as well as up to 64 controllers at one site.

A main focus with the development of the InteliGen 1000 was security, the company said. The InteliGen 1000 brings to the power generation industry best practices from the information technology world, introducing a unique cyphering system for each connection session with the controller, extra authentication for users connecting from the outside, ComAp signed firmware, individual user account logins, data logging, and many others. All this to protect our customer’s facilities against external cyber-attacks and at the same time, let them enjoy the benefits of remote monitoring and connectivity, the company said.

InteliGen 1000 combines pre-programmed functions for gen-set control to make the controller running in few steps, but there is also an internal PLC interpreter that could be freely used by solution designers to meet their individual project requirements.

Some key features according to the company: