U.S. consumption of residual fuel oil—primarily used as a bunker fuel—was higher in November 2021 than during any month since January 2017, according to the U.S. Energy Information Administration (EIA).

The EIA noted that the International Maritime Organization (IMO) instituted tighter maritime fuel sulfur specifications on Jan. 1, 2021. Before 2020, marine fuel could have a sulfur content as high as 3.5%, which is considered high-sulfur fuel oil. The IMO now requires ships to switch to fuels with a 0.5% sulfur content or less, forcing ships to use a more processed, and more expensive, variety of residual fuel oil called very-low-sulfur fuel oil. 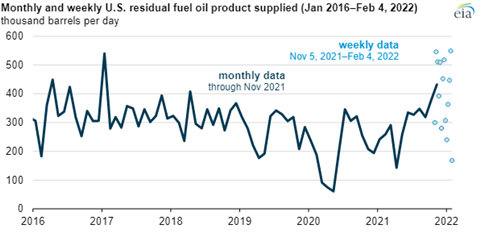 Since spring 2020, overall production of residual fuel oil has decreased because of substantially less refinery production resulting from the effects of the COVID-19 pandemic.