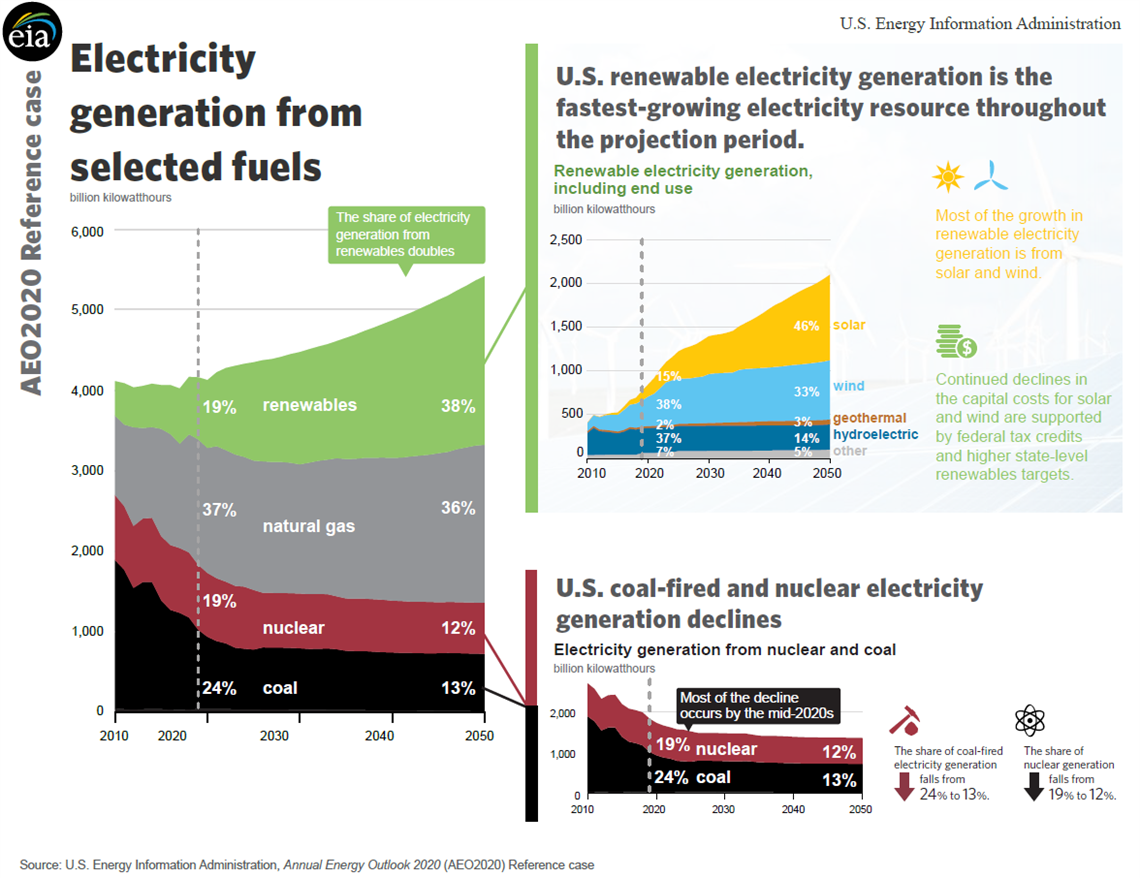 The report’s reference case, which serves as a baseline modeled projection designed to explore varying assumptions about the economy, technology, and policy, assumes a future where slower growth in consumption in an increasingly energy efficient U.S. economy contrasts with increasing energy supply because of technological progress in renewable sources, oil, and natural gas.

“We see renewables as the fastest-growing source of electricity generation through 2050 as cost declines make them economically competitive beyond the expiration of existing federal and state policy supports,” noted EIA Administrator Linda Capuano. “With continued technologically enabled growth in domestic oil and natural gas production, we see the United States remaining a net exporter of energy for some time.”

The reference case projects domestic energy demand to grow 0.3% per year on average through 2050, slower than the average annual growth of 1.9% in U.S. gross domestic product. This projection is largely driven by continued increases in energy efficiency in the end-use sectors. Gains in appliance efficiency in the residential and commercial sectors, increases in efficiency of new capital equipment in the industrial sector, and increases in fuel economy partially offset the growth in the number of households, industrial activity, and vehicle-miles traveled.

EIA reported last year that the United States became a net exporter of energy on a monthly basis in September 2019 after decades of being a net importer.

Reference case also projects the share of U.S. electricity generation from renewable sources to double from 19% of total generation in 2019 to 38% by 2050. Solar contributes the most to the growth, more than tripling from 14% of total renewable generation in 2019 to 46% by 2050. Although coal and nuclear generation decline through the mid-2020s as a result of capacity retirements, their generation stabilizes over the longer term as the more economically viable plants remain in service. At the same time, the United States continues to produce historically high levels of crude oil and natural gas. In the reference case, because of continued development of tight oil and shale gas resources in the East and Southwest regions, U.S. crude oil production continues to set annual records through the mid-2020s and natural gas production grows through 2050.

The reference case also projects that the United States will continue to export more crude oil, petroleum products, and natural gas than it imports. Liquefied natural gas exports combined with pipeline exports to Canada and to Mexico continue to rise through the 2020s before remaining relatively flat through 2050.

After falling until about 2030, U.S. energy-related carbon dioxide (CO2) emissions resume modest growth, but by 2050, are lower than 2019 levels. For the next decade, U.S. energy-related CO2 emissions decrease because of retirements of coal-fired generation capacity and corresponding changes in the fuel mix for electric power. Later, increases in energy demand due to growth in transportation and industry cause emissions to increase.