EIA: US power from natural gas will drop in ‘21

The U.S. Energy Information Administration (EIA) forecasts that generation from natural gas-fired power plants in the U.S. electric power sector will decline by about 8% in 2021, driven in large part by an increase in prices for gas.

The decline would be the first annual decline in natural gas-fired generation since 2017. 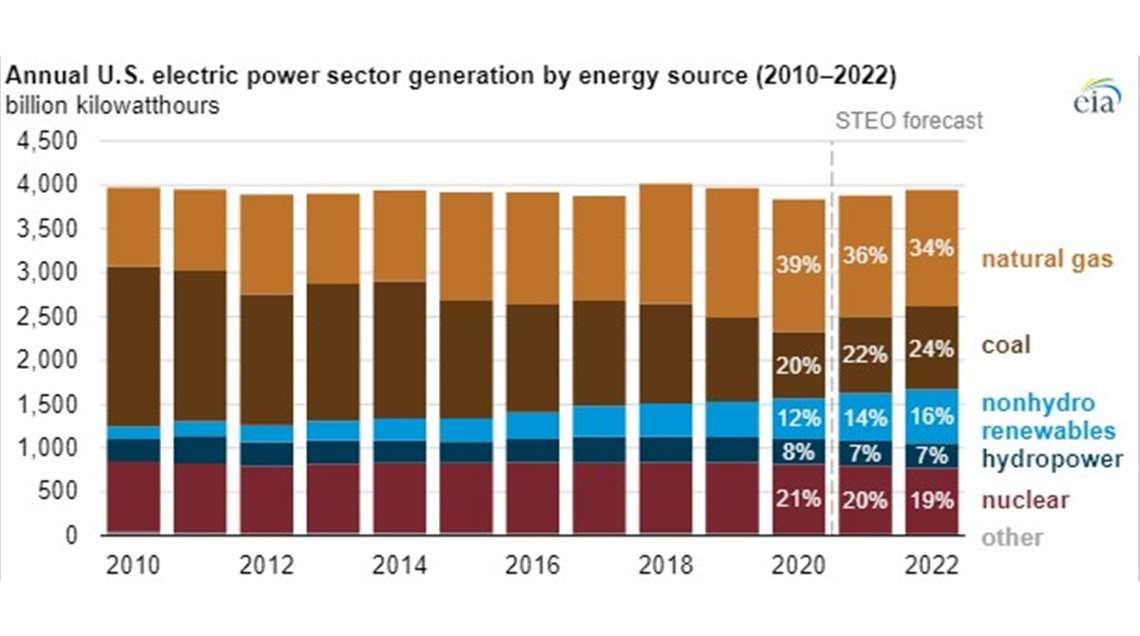 The EIA Forecast generation from coal-fired power plants will increase by 14% in 2021, after declining by 20% in 2020. The shift from coal to natural gas marked a significant change in the energy sources used to generate electricity in the United States in the past decade. This shift was driven primarily by the sustained low natural gas price. In 2020, natural gas prices were the lowest in decades: the nominal price of natural gas delivered to electric generators averaged US$2.37 per million British thermal units (Btu). For 2021, EIA forecasts the average nominal price of natural gas for power generation will rise by 41% to an average of US$3.35 per million Btu, about where it was in 2017. In contrast, EIA expects nominal coal prices will rise just 6% in 2021.

EIA forecasts that generation from nonhydropower renewable energy sources, such as solar and wind, will grow by 18% in 2021—the fastest annual growth rate since 2010.

Significant growth in electricity-generating capacity from renewable energy sources in 2021 is also likely to affect the mix of fuels used for power generation. Power developers are scheduled to add 15.4 GW of new utility-scale solar capacity this year, which would be a record high. An additional 12.2 GW of wind capacity is scheduled to come online in 2021, following 21 GW of wind capacity that was added last year. Much of this new renewable generating capacity will be located in areas that have relied on natural gas as a primary fuel for power generation in recent years, such as in Texas.