ExxonMobil and MHI have worked together to build world-scale petrochemical plants over the past two decades in the U.S. and Singapore. The companies said this CCS partnership continues the companies’ strong commitment to developing solutions for the energy transition on their paths to net zero. By working together, the companies said they will provide industrial customers with the confidence that their CCS projects will be designed, built and executed effectively.

The companies, with the support from The Kansai Electric Power Co., plan to advance carbon capture technologies that could reduce the cost of CO2 capture for heavy-emitting industrial customers. The joint effort will build upon KM CDR Process and Advanced KM CDR Process, developed by MHI and KEPCO, the only liquid amine carbon capture technology commercially demonstrated at greater than 1 million metric tons per year, the companies said. 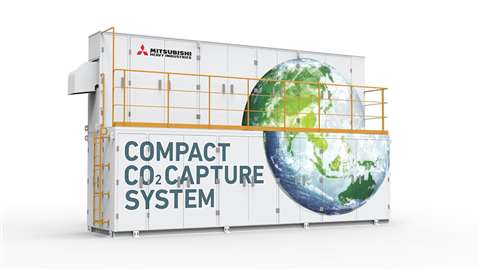 ExxonMobil has more than 30 years of experience capturing and transporting CO2 and safely injecting it into geological formations. Mitsubishi Heavy Industries is the world’s largest licensor of post-combustion CO2 capture technology and has been developing it for more than three decades. The company’s record includes 14 commercial CO2 capture plants already delivered worldwide.

“Carbon capture and storage technology and innovation are critical to our path to Net Zero,” said Kenji Terasawa, president and CEO, Mitsubishi Heavy Industries Engineering. “As an expert in advanced engineering, MHI is committed to leading the way in achieving decarbonization goals through strategic collaboration and investments in new technologies. We look forward to partnering with ExxonMobil to continue advancing carbon capture technologies to provide essential carbon neutrality solutions for various industries.”

ExxonMobil Low Carbon Solutions noted that it is working to bring lower-emission technologies to market, making them accessible to hard-to-decarbonize industries, including its recent agreement with a leading global manufacturer of nitrogen and hydrogen products in Louisiana. It is focusing its carbon capture and storage efforts on point-source emissions, the process of capturing CO2 from industrial activity that would otherwise be released into the atmosphere. Once captured, the CO2 is injected into deep, underground geologic formations for safe and permanent storage.