GE and IHI Corp. (IHI), a heavy industry manufacturer based in Japan, said they will collaborate to develop a pathway to using ammonia in both existing and new gas turbines in Asia.

The companies seek what they call an Ammonia Roadmap and they will conduct advanced research on the marketplace volume of ammonia as well as feasibility studies for ammonia as feedstock for gas turbine power plant installations in Japan and across Asia. The companies signed a memorandum of understanding (MOU) outlining their plans.

Ammonia is utilized today as a fertilizer, chemical raw material and used recently, as a fuel, effectively produced in industrial applications. In addition, when used as a carrier for hydrogen, ammonia enables an efficient, lower-cost transport and storage of a carbon-free fuel which can be used directly in natural gas power generation. Since ammonia contains no carbon, it does not emit carbon dioxide when burned and may therefore enhance the power sector’s efforts in reducing carbon emissions.

“GE is continuing to advance our gas power technologies towards near zero-carbon power generation and part of this evolution may involve the use of ammonia as a fuel in order to reduce CO₂ emissions,” said Ramesh Singaram, president and CEO for GE Gas Power in Asia. “We look forward to the collaboration with IHI. “Together, we’ll define an ammonia gas turbine business roadmap supporting both companies’ goal of reducing carbon emissions from gas turbines power installations.”

IHI is a leading Japanese integrated heavy industry group that originated with the establishment of the nation’s first modern shipyard in 1853. In power generation, the company manufactures boilers and gas turbines for thermal power plants. 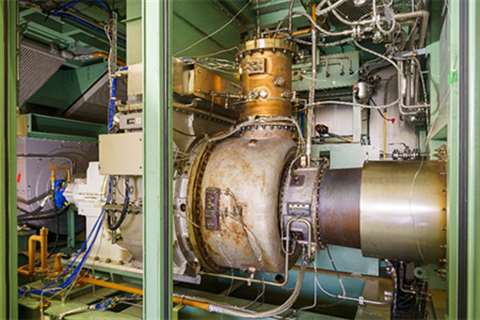 A 2000 kW class gas turbine co-firing liquid ammonia and natural gas at IHI Yokohama Works. IHI and GE announced that a Memorandum of Understanding (MOU) has been signed for collaborative development of gas turbine business roadmap (Ammonia Roadmap). The Ammonia Roadmap will support the use of ammonia as a carbon-free fuel to lower carbon emissions in both existing and new gas turbines.

“IHI is the leading company of ammonia co-firing technology on a gas-turbine with 70% of the liquid ammonia co-firing ratio,” said Koji Takeda, executive officer president of Resources, Energy & Environment Business Area IHI. “GE and IHI have a strong relationship through the gas turbine and aero engine business. We are thrilled to collaborate with GE and develop a new business opportunity. Our combined strengths will empower us to explore the potential of ammonia-fired gas turbines to contribute to the Japanese government’s target of becoming carbon neutral by the year 2050.”