Going To The Max 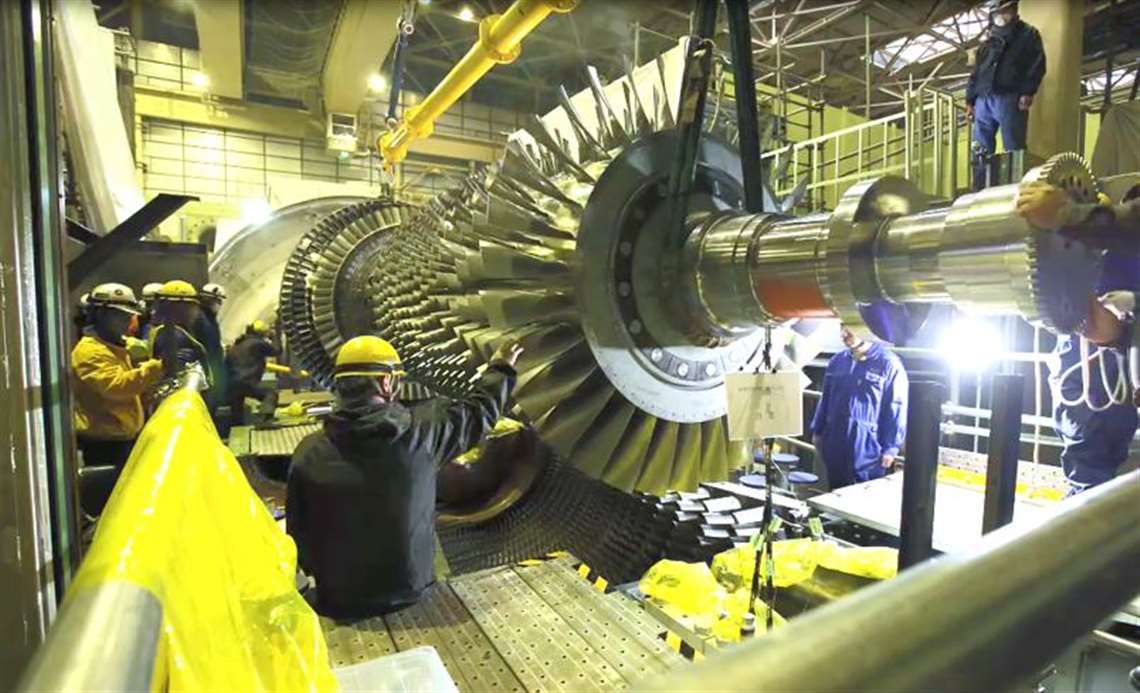 “The 9E has been on the market since the late 1970s, so we’re just about hitting 40 years with 700 plus units out in the field,” Colwell said. “We thought it was time to up the game and provide a step-change. We’ve been developing products throughout the years improving the performance—efficiency, mainly—and what we decided to do was make that step change, make an investment and separate ourselves from the market and be able to meet the needs customers have been asking for some time.”

The new four-stage 9EMAX gas turbine is available in three configurations, Colwell said: A flange-to-flange replacement, a turbine module only and as a new install.

For older units that are reaching the end of their life, the 9EMax flange-to flange (F2F) solution may provide the best approach to revitalize mature plants, Colwell said. For younger units, the 9EMax turbine module represents an alternative to full replacements and can boost efficiency approximately 4% and output up to 145 MW with respect to the previous 9E.03 turbine module. This option also leverages existing compressor and combustion systems to increase the value of the existing assets, the company said. The 9E.04 is the new unit configuration and serves customers with new unit requirements.

All the components for the gas turbine section are new, Colwell said. With the step from three-stage to four, there are now 12 hot gas components instead of nine.

“So the components basically from the turbine flange back are redesigned, improved to meet those needs,” Colwell said. “We decided to go for this four-stage design that really set us apart in the market but also helped meet that need.

“Whatever features we built into this product were validated by customer needs, customer requests and what they wanted to see in the product,” Colwell said. “We baked all that in and basically this is the outcome of that feedback from customers.”

The upgrade to the 9E gas turbine at the Futtsu Thermal Power Station was shown to improve combustion efficiency by 4.2%, from 47.2 to 51.4%.

“Generally, the recommended frequency of inspection for equipment of this scale is once every one to two years,” said Kenji Nakamura, manager of Futtsu’s GT replacement group. “The 9EMax, however, can get away with a maintenance interval of once every four years, assuming typical operating loads—roughly speaking, a maximum of 900 starts and 32000 operating hours due to the length of its parts’ component lives.”

The 9EMax can operate at partial loads, which the company said makes it suitable for power producers looking to add renewables to their energy mix. It also includes an array of digital solutions to boost operational reliability, improve combustion operations and manage emissions. In addition, GE’s software solutions help offset degradation between maintenance intervals and operating challenges on hot days.

“Obviously if you had a 32-year-old unit, you had the basic controls,” said Jay Bryant, product line marketing leader for B & E class GE. “Now you’re getting something that’s more modern-age and we can do some things to control emissions a little better, to control part load efficiencies, to extend parts lives and maintenance lives for them.”

Bryant said that while efficiency is key for 9E customers, the need for more power output in certain areas, such as in developing economies, is also important. Colwell noted Sub-Saharan Africa, the Middle East and parts of Asia as regions seeking more power.

“They’re saying I want the extra 15 to 20 MW in the same footprint and I’m almost going to off-set my fuel bill from the extra MW because of the improved efficiency,” Bryant said. Bryant said the upgrade at the Futtsu Thermal Power Station could save upwards of US$9 million a year in fuel costs per turbine unit.

“If we can reduce their annual fuel cost by several percent, you can imagine there’s a lot of savings potential,” Colwell added. “Fuel is the biggest cost for most of our customers.”

The first unit went online in June, and the second unit is now undergoing installation. A third unit has been shipped with another shipping later this year. Another two will be installed in 2018.

“They want to accelerate the process—I take that as a positive sign that they’re pleased with the first one,” Bryant said.