INNIO’s Jenbacher Type 4 platform, which has been in successful operation for 20 years with about 6000 engines delivered worldwide, went through what the company calls significant improvements in 2019.

With a total of more than 120 000 operating hours, 16 installed units of this new generation have been running successfully since 2019—one of them with more than 20 000 operating hours, corresponding to a runtime of 2.5 years in continuous operation. Among the earliest customers is Stadtwerke Bad Säckingen, which opted to expand its southern heating plant with two J420 Es. 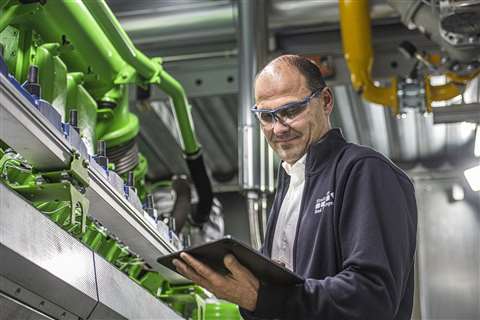 “We are very pleased with the successful startup phase of the new generation of our Jenbacher J420,” said Olaf Berlien, president and CEO of INNIO. “At Stadtwerke Bad Säckingen, our next generation J420 is effectively demonstrating how the energy transition can be implemented with flexible combined heat and power solutions.”

The new generation of the Jenbacher series 4 power output has been increased by up to 60 kW and electrical efficiency by up to 1 percentage point. The new design, with a 60 cm reduction in length, makes for a more compact unit that is easier to integrate, the company said. According to INNIO, the engine platform’s fuel flexibility is a major advantage. Type 4 units are available with INNIO’s “Ready for H2” option today and can run on up to 100% hydrogen after appropriate conversion, if desired. In addition, INNIO has even increased the serviceability of the J420 D/E by improving component accessibility.

“The Jenbacher J420 next-generation engine from INNIO will quickly establish itself, setting a new benchmark for economics and resource conservation,” said Heiko Strittmatter, head of heat supply and power generation at Stadtwerke Bad Säckingen. “Running in CHP mode, it excels in energy efficiency—a key driver in the energy transition.”

Since the beginning of the year, the new Jenbacher J420 has been available as standard for applications in 50 Hz countries. The 60-Hz application will follow, along with implementation of the new design on the entire Jenbacher series 4.