The Hydrogen Council, a global CEO-led initiative with a goal of accelerating hydrogen deployment, has named Yoshinori Kanehana, chairman of Kawasaki Heavy Industries, as a new co-chair. The other co-chair is Tom Linebarger, chairman and CEO of Cummins.

Kawasaki is one of the founding members of the council and a key player in the hydrogen sector advocating for its role in accelerating the decarbonization of the industry. Kawasaki has been leading HySTRA (Co2-free Hydrogen Energy Supply Chain Technology Research Association) and working with its partners on the realization of the international shipping of liquefied hydrogen, through the operation of the world’s first liquefied hydrogen carrier Suiso Frontier between Australia and Japan.

“I am honored to be appointed as a new Board member and co-chair,” said Kanehana. “We are now at a critical stage in our journey from the demonstration to the commercial stage for the global deployment of hydrogen. It is essential to bring together the knowledge and expertise of the various members of the council towards our common objectives. Amidst the unprecedented challenges, let me assert my firm belief that the hydrogen industry will rapidly expand and mature by strengthening partnerships with stakeholders including key industries, policy makers and investors. I look forward to working together towards the realization of a global hydrogen economy.” 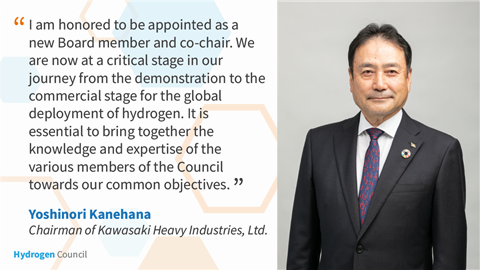 The Council would like to acknowledge the strong leadership of outgoing co-chair Benoît Potier, CEO and chairman of Air Liquide, who has guided members over the last five years. It was his leadership that led to the formation of the council and under his direction that it has helped elevate hydrogen’s global profile as a viable solution. As Potier steps away from his co-chair role, he will remain an active Board Member and play an important part in connecting with leaders in Europe on behalf of the Council.

“The Hydrogen Council has come a long way in the last five years, with more than 130 members today compared to 13 at the time of its creation in 2017,” Potier said. “It has played a key role in showing the world what hydrogen can bring to a successful energy transition. Today, this role is widely recognized as the total investment into projects and along the whole value chain of hydrogen around the world is estimated at more than US$500 billion through 2030. As the hydrogen revolution is entering a new phase of its development, and as I hand over my role as co-chairman to Mr. Yoshinori Kanehana, I am confident that the Hydrogen Council will continue to contribute in maintaining this momentum. I am also looking forward to remaining an active member of the Council to further advocate the incredible merits of hydrogen.”

“I offer my sincere congratulations to Yoshinori as he takes on this new role in hydrogen leadership,” Linebarger said. “I look forward to working closely with him and KHI to further the council’s vision, which has been deeply influenced by Benoît and Air Liquide, and making meaningful progress together in the journey to global decarbonization.”

Since its creation, the Hydrogen Council has witnessed major changes in the development of the hydrogen economy. The growth of the council’s membership in the past year is the result of the important shift in a global mindset and constant work from the Council’s members to define a united vision and long-term ambition for hydrogen to foster the decarbonization of our economies.