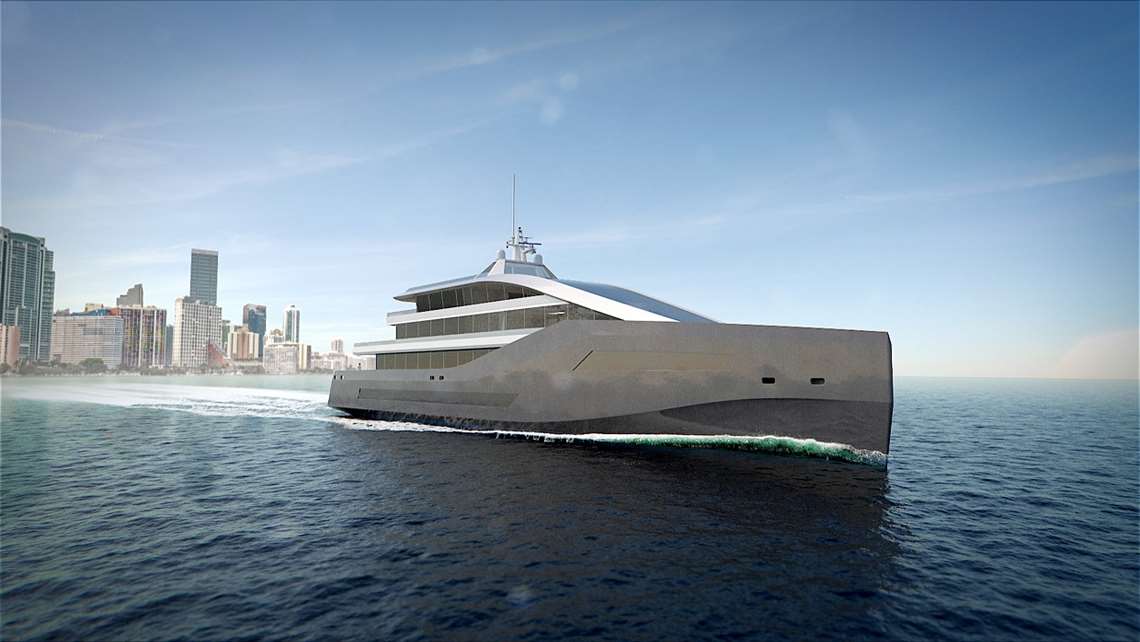 A luxury yacht concept aimed at highlighting ship intelligence and hybrid propulsion based on liquefied natural gas (LNG) and battery power in the marine leisure sector has been outlined by Rolls-Royce.

Designed for 12 or more passengers and 12 crew, the 62 m Crystal Blue is based on a composite or aluminum hull operating a power plant based on the Rolls-Royce hybrid LNG/Battery SAVe-CUBE system configuration.

The Crystal Blue yacht and its support vessel Blue Shadow have been developed to enable new thinking in yacht design and propulsion by optimising the yacht’s superstructure for greater guest use and comfort, according to Rolls-Royce.

An intelligent dynamic positioning system automatically controls twin azimuthing thrusters and a TT1100 bow thruster – technology that is usually found on offshore support vessels that must maintain their positions next to oil rigs to within a couple of meters. On board Crystal Blue, however, this system allows the yacht to remain in the right spot on the water – without using an anchor.

Levander added: “Our ship intelligence and remote-control concepts have allowed us to design a yacht for the future that has the bridge located below the bow, inside the vessel. The crew is able to monitor and control the vessel using sophisticated sensors, cameras, display screens and situational awareness technologies; but an internal bridge frees up the traditional area of the bridge in the forward part of the superstructure to let owners and guests enjoy a panoramic vista that is traditionally only enjoyed by the crew.”

The bridge console is based on the Unified Bridge design that Rolls-Royce has already delivered to several ship types, including large superyachts. It also features technology Rolls-Royce and Danish salvage and towage company Svitzer demonstrated in the first remote controlled commercial tug earlier this year.

The Rolls-Royce Blue Ocean team has also incorporated some safety features into the design, namely a ‘safe room’ in which guests and crew can seek refuge in the event of an unauthorized boarding. Once inside, the crew can override the controls and operate the yacht remotely or direct a shore-based center to pilot the vessel.

Although LNG fuel is increasingly specified for commercial vessels, particularly coastal ferries, the size of the fuel tanks and a lack of LNG bunkering infrastructure has been a major barrier to the yacht sector embracing the fuel said Rolls-Royce.

“This is where Blue Shadow comes in,” explained Henrik Alpo Sjöblom, project manager in the Rolls-Royce Blue Ocean team.

Operating in convoy, Blue Shadow is a smaller, 42 m remotely-controlled, steel-hulled support vessel used for transporting and launching the mother ship’s tender, helicopter and any other ‘toys’ that the yacht owner may have. It also allows designers to make better use of the aft area of Crystal Blue for guests, such as by including an infinity pool, or a beach area. The shadow boat also doubles up as the owner’s personal LNG bunkering barge.

“Burning LNG has clear advantages over marine diesel oil for the yacht sector,” said Sjöblom. “There is no smoke, it doesn’t emit any unpleasant odors or fumes and it meets stringent emissions regulations, allowing yachts to enter otherwise prohibited ecologically sensitive waters.

“We have dimensioned Crystal Blue fuel tanks for a range of 3000 nautical miles without refueling but with the Shadow’s additional fuel capacity, the range increases to 4400 nautical miles, meaning that most of the typical yachting areas are accessible.”

Levander added: “With Crystal Blue and Blue Shadow we can more effectively showcase how new digital-based ship intelligence solutions can offer unique possibilities, greater capability and added value to the luxury yacht market, both for new and existing vessels. The systems and technologies Rolls-Royce has available can bring ‘green’ values and previously unheard-of levels of comfort to the yacht owner.”