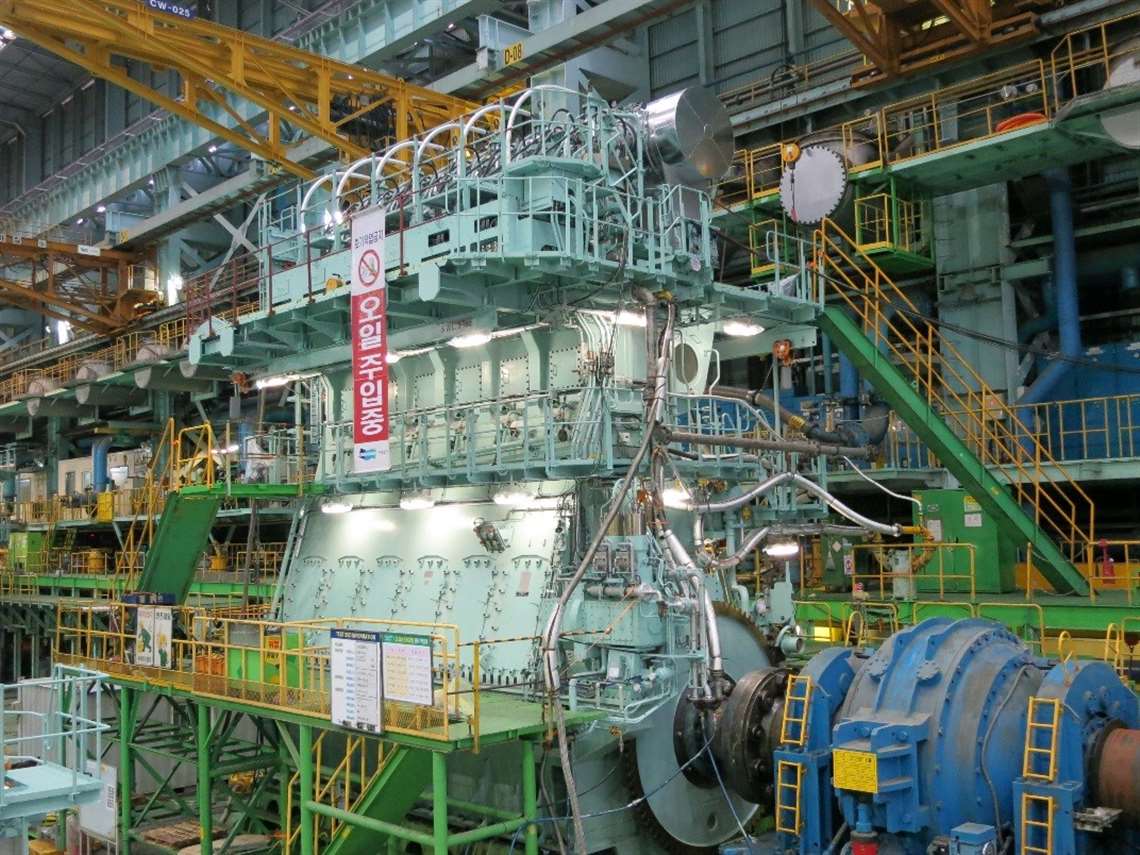 Under a contract signed in March 2017, SCF Group, Russia’s largest shipping company, has chosen seven-cylinder, 62-cm bore type 7X62DF engines from WinGD’s X-generation to propel a series of four liquefied natural gas (LNG)-fueled Aframax-class tankers. The ships will be built by Hyundai Heavy Industries (HHI) of South Korea at its shipyard in Samho, while the 7X62DF engines will be built by HHI’s Engine & Machinery Division (HHI-EMD) in Ulsan, South Korea.

The 7X62DF engines are rated 13 800 kW at 86 rpm and designed to operate on a choice of LNG, HFO, distillate or hybrid liquid fuels. The engines comply with IMO Tier 3 limits for oxides of nitrogen (NOx) in their gas fuel mode, and with IMO Tier 2 when burning liquid fuel. To enable IMO Tier 3 compliance on liquid fuel operating mode, the contract also specifies the supply of low-pressure selective catalytic reduction (SCR) after-treatment systems for the 7X62DF engine.

As well as the engine designs, WinGD will also supply its Engine Diagnostic System which targets increased availability via monitoring, lower fuel costs via engine performance optimizing and extension of predicted Times Between Overhaul (TBO) of components.

The Aframax crude oil tankers have a capacity of 114 000 dwt. The vessels are designed to ice-class 1A and are scheduled to operate primarily in the Baltic and North seas. With the ability of the 7X62DF engines to meet IMO Tier 3 limitations on NOx and SOx in Emission Control Areas (ECAs) when operating on gas without after treatment, and when burning low sulfur liquid fuel with low-pressure SCR, the tankers are designed for worldwide trade, including ECAs.

SCF said it anticipates that the WinGD X-DF engines will deliver substantial emissions benefits as well as excellent total cost of ownership. To exceed rather than meet emissions legislation in the environmentally sensitive regions in which its fleet operates, SCF notes that marine engines running on LNG release over 90% fewer sulfur oxides, over 80% fewer nitrogen oxides, 15% less carbon dioxide than those burning standard marine fuels. The ships’ auxiliaries and boilers will also be equipped for operation on gas fuel.

The low-pressure gas admission technology means that, in contrast to engines with high-pressure gas injection, the gas fueling system on the X-DF engines does not require high-pressure electrically-driven cryogenic pumps, the company said, which considerably reduces both the purchase and installation cost of the fueling system and the consumption of electricity needed for injection of gas into the combustion chamber. As a result, there is also the potential to dimension a ship’s auxiliary plant smaller for further savings.

“This order represents a vote of confidence in X-DF and a recognition from SCF Group and its partners of the benefits of low-pressure X-DF technology to both their business and the environment,” said Martin Wernli, WinGD CEO. “Further, with this project, the SCF Group has raised the bar for environmentally-friendly Aframax tankers. Overall the order for the 7X62DF for the gas-fuelled Aframax tankers is a very clear message that our low-pressure lean burn technology is becoming the industry standard for all LNG-fuelled vessels and not just LNG carriers.”

Additionally, the WX72DF also successfully passed the Type Approval Test (TAT) on March 22. To date, already seven engines have been built, all completing the respective shop tests (FAT). All X-DF engines are meeting and exceeding by far the requirements for Tier 3 NOx emissions. WinGD’s X-DF concept with its low-pressure gas system provides advantages in terms of lower investment and operating cost. It allows also compact installation of a fuel gas handling system which convinces with its simplicity hence lower CAPEX and OPEX, thanks to the low gas pressure requirement. The measured NOX emissions are far below the required Tier 3 limit.