Aimed at crude tankers and bulkers

The approval-in-principle (AIP) from classification society DNV affirms the technical feasibility of the concept for the VLCC and Capesize vessel classes, and paves the way for it to be implemented in design work on retrofits by the UK-based ship repair and retrofitting group.

Newport Shipping said this positions the company to take a leading role in the rapidly emerging market to adapt vessel fuel systems for LNG that has seen only a few such retrofits globally to date. 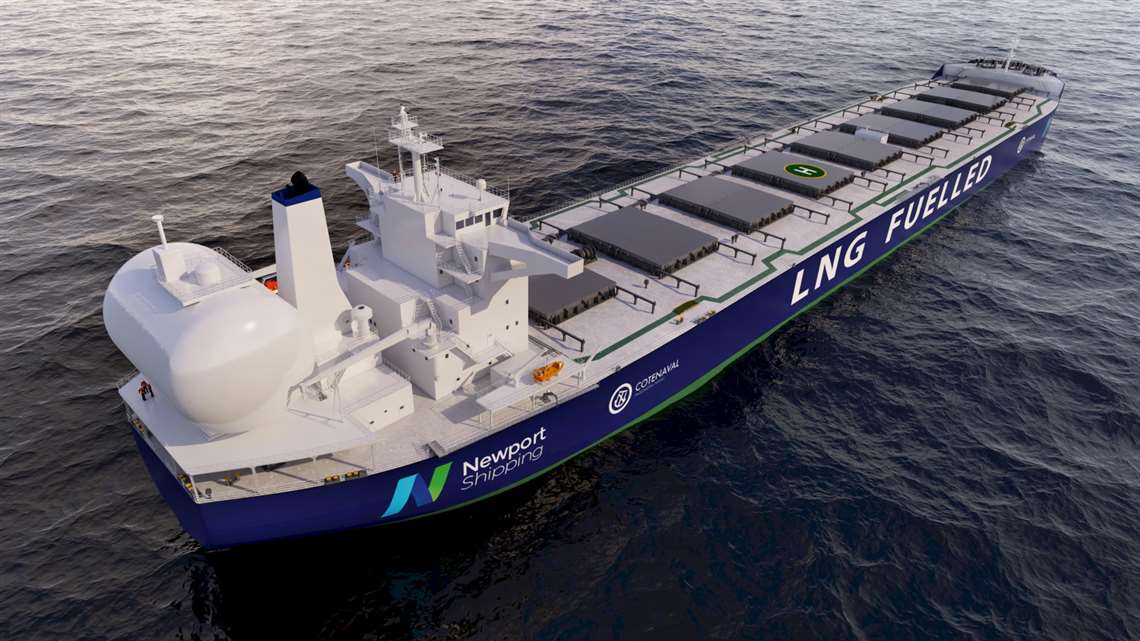 “LNG is one of the cleanest transition fuels currently available globally and can be used with minimum modifications to a ship,” said Newport Shipping’s managing director Lianghui Xia. “CO2 emissions can be reduced by between 20% and 30% just by switching to LNG without installing any other equipment.”

As well as environmental gains, there are also significant cost benefits as LNG is much cheaper than most fuels and there is already a worldwide bunkering network in place offering this fuel at competitive prices, he said.

Newport Shipping’s concept is based on deck-mounted LNG tanks that can be installed without major modifications to the vessel hull, thereby reducing installation costs, as part of a retrofit solution using a dual-fuel engine that would also be suitable for future use of carbon-neutral methane such as bio-LNG.

Tank capacity, which is based on a typical ship profile and operating route, is sufficient for a single voyage prior to refueling, the company said.

Newport Shipping also argues that conversion of the existing global merchant shipping fleet of around 100 000 vessels for use of alternative fuels is no longer an option, but an economic necessity for shipowners as reducing emissions will be a rite of passage for trading in a low-carbon shipping future.

The IMO has set a goal to halve greenhouse gas emissions from international shipping of nearly 1 billion tonnes per annum, and reduce carbon intensity towards 70% of 2008 levels, by 2050.

In addition to global and regional regulations, there is increasing market pressure from charterers and banks for decarbonization as a condition of cargo contracts and ship finance.

Xia believes Newport Shipping’s concept offers “a practical and cost-efficient solution” to cut fleet emissions in the near term pending adoption of technologies for carbon-neutral fuels such as ammonia and hydrogen, as well as battery technology, that are still some way off commercial realisation.

He adds that a long-term payment plan over 5 to 7 years on 60% of the total cost is offered to clients for its LNG retrofit solution.

Newport Shipping, with a global network of 15 partner yards spanning international trade routes in the Atlantic and Pacific regions that offers guaranteed drydock slots and fast turnaround, is now poised to bring this LNG retrofit solution to the global shipping market.