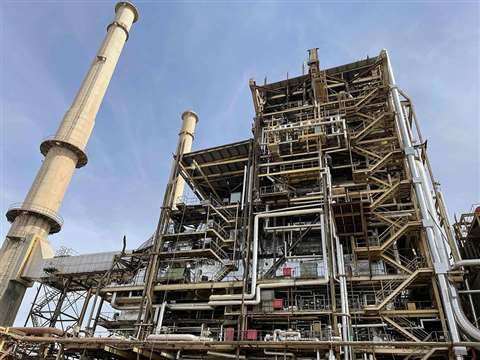 Unit 1 at the Hartha Thermal Power Station in Iraq, which was recently refurbished by Mitsubishi Power, a brand of Mitsubishi Heavy Industries (MHI). MHI and Mitsubishi Electric said the two companies have reached a basic agreement to establish a joint venture to integrate their power generation business. (Image: MHI).

“This business integration will create a stronger partnership than ever before and expand the two companies’ power generator systems on a global scale, thereby contributing to the realization of a carbon-neutral society,” the companies said.

According to a news release, the companies plan to set up the power generator joint venture by April 1, 2024, with Mitsubishi Electric as majority owner.

“Climate change caused by global warming has emerged as a common issue worldwide, and efforts to achieve carbon-neutrality, which would reduce greenhouse gas emissions to net zero, are accelerating around the world,” the companies said in a new release. “Electricity demand is expected to increase due to economic growth mainly in emerging countries... in the future, existing thermal power generation will decarbonize its systems with fuel conversion to hydrogen, ammonia, and other carbon-free fuels.”

According to the companies, large-scale power plants that have supported the power infrastructure so far will play an important role as a force to adjust for the increase in variable renewable energy sources, whose power generation is affected by weather and other factors.

“Considering this market environment, Mitsubishi Electric and Mitsubishi Heavy Industries have reached this basic agreement to strengthen their market competitiveness further by integrating their respective businesses and combining their respective technologies and assets,” the companies said. “This business integration will create a stronger partnership than ever before and expand the two companies’ power generator systems on a global scale, thereby contributing to the realization of a carbon-neutral society.”

MHI was founded in 1950. Its products span energy, logistics and infrastructure and machinery, aerospace and defense. Its energy division produces gas and steam turbines, wind turbines as well as diesel and gaseous engines for power applications.