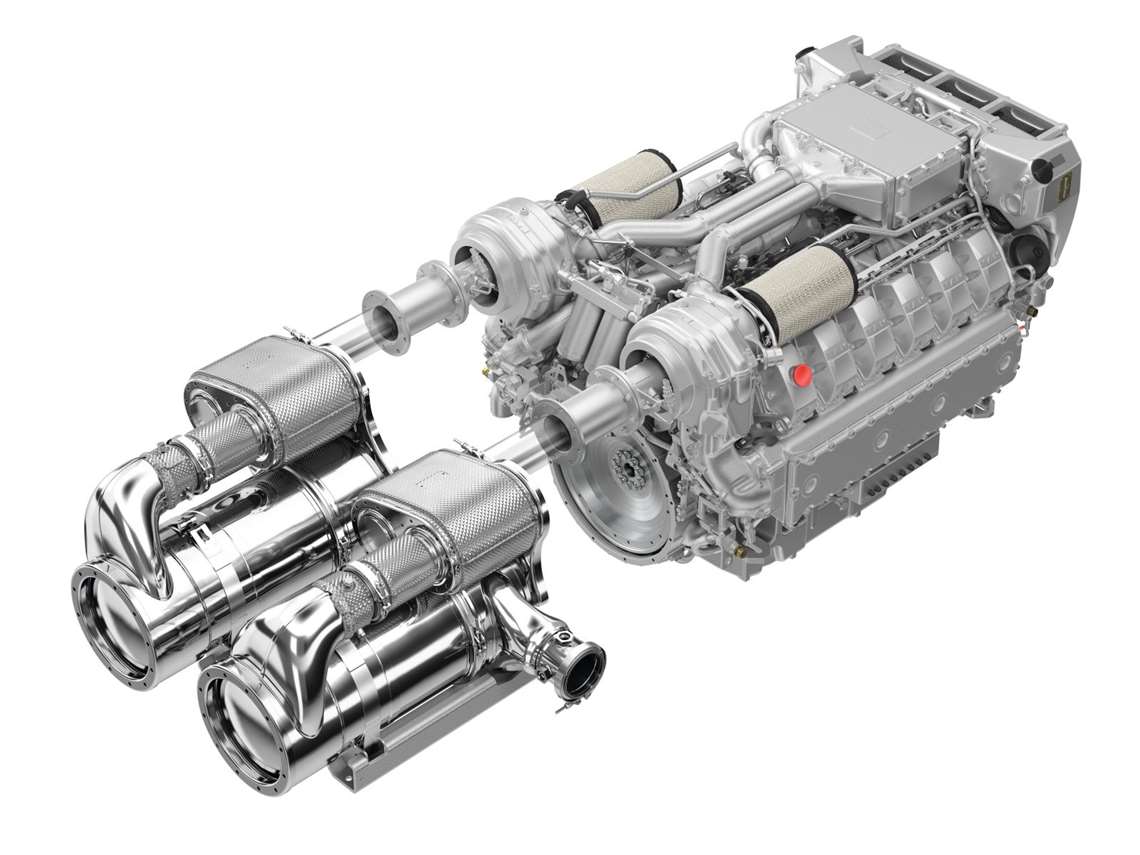 At the SMM show in Hamburg, Germany, MAN Engines presented the modular exhaust gas aftertreatment system (EAT), the company’s solution for meeting the IMO Tier 3 and US EPA Tier 4 emission standards for commercial use.

MAN said the system sets itself apart with a high level of flexibility and the fact that it is extremely compact, which is helpful to meet the various engine room specifications associated with commercial shipping applications. The modular EAT makes a wide range of installation configurations possible as the individual selective catalytic reduction (SCR) components can be positioned differently. Because of this, a flexible system integration tailored to specific requirements can be provided.

“By minimizing the system down to just a few components, it stays compact, regardless of its configuration.  Thus the system always proves itself as the optimal solution for our customers, even when to be installed in tight engine rooms,” said Claus Benzler, head of Marine MAN Engines.

The centerpiece of the SCR is a catalytic converter which helps to reduce the nitrogen oxides (NOx) in the emissions. In order to do so, a 32.5% aqueous urea solution is dosed in an SCR mixer and then injected continuously and directly into the exhaust tract. The solution then reacts with the nitrogen oxides and converts them into water (H2O) and harmless nitrogen (N2). This method of SCR injection does not involve compressed air, saving again more space, reducing the technical complexity and installation space required for this already extremely flexible system.

In other words, the MAN Engines modular exhaust gas aftertreatment system is a modern SCR-only system, which does without exhaust gas recirculation as well as bulky and heavy components like diesel particulate filters and oxidation catalytic converters. This saves additional costs and makes the system less complex as a whole.

Together with the optimized combustion of MAN engines, the SCR catalytic converter meets the requirements of both emission levels IMO Tier 3 and the US EPA Tier 4. Using the SCR means that specific fuel consumption– was additionally reduced by up to 8% per engine while still maintaining the same power, the company said.

The foundation of the system is a result of the expertise at MAN Truck & Bus AG, which has successfully been using SCR systems in the group’s own trucks in high-volume production since 2006. Furthermore, MAN Engines also benefits from the experience of fitting and installing after exhaust treatment systems gained in the agricultural and industrial sectors. Here the technology has been used since 2015 for in-line and V-engines. Also the SCR system is currently proving its practicality in field trials for commercial workboat applications, the company said.

As a result, the engines from MAN Engines for workboats are already equipped to meet the IMO Tier III emission standard, which will be mandatory from 2021 on. This standard stipulates a reduction in nitrogen oxides (NOx), depending on the engine’s maximum operating speed, by around 70% compared to its predecessor, IMO Tier 2. Instead of the 7.7 g/kWh permitted previously, only 2.0 g/kWh will be allowed in the future.

At last year’s International Boat Show in New Orleans, Louisiana, USA, MAN launched its SCR system, optimized for work boats and designed to meet the US Tier 4 emissions standard. This standard permits a nitrogen oxide limit value of 1.8 g/kWh and 0.04 g/kWh for particulate emissions and has been in effect since Oct. 1, 2017 for all US-flagged commercial vessels with an output of more than 600 kW (816 hp) per engine. This equates to a reduction in nitrogen oxides of almost 68% compared to the previous US Tier 3, the company said.

With its 12-cylinder engines, MAN Engines currently offers a consistent range of outputs from 551 to 1066 kW for the US Tier 4 emissions standard and up to 1,213 kW for the IMO Tier III emissions standard. This portfolio will be continuously expanded to include other power outputs.

MAN Engines will be showcasing its SCR system at the SMM outdoor booth A4.FG10, located between Hall A3 and A4. A D2862 12-cylinder engine packaged with a SCR unit will be on display in the atrium, booth A1.13.