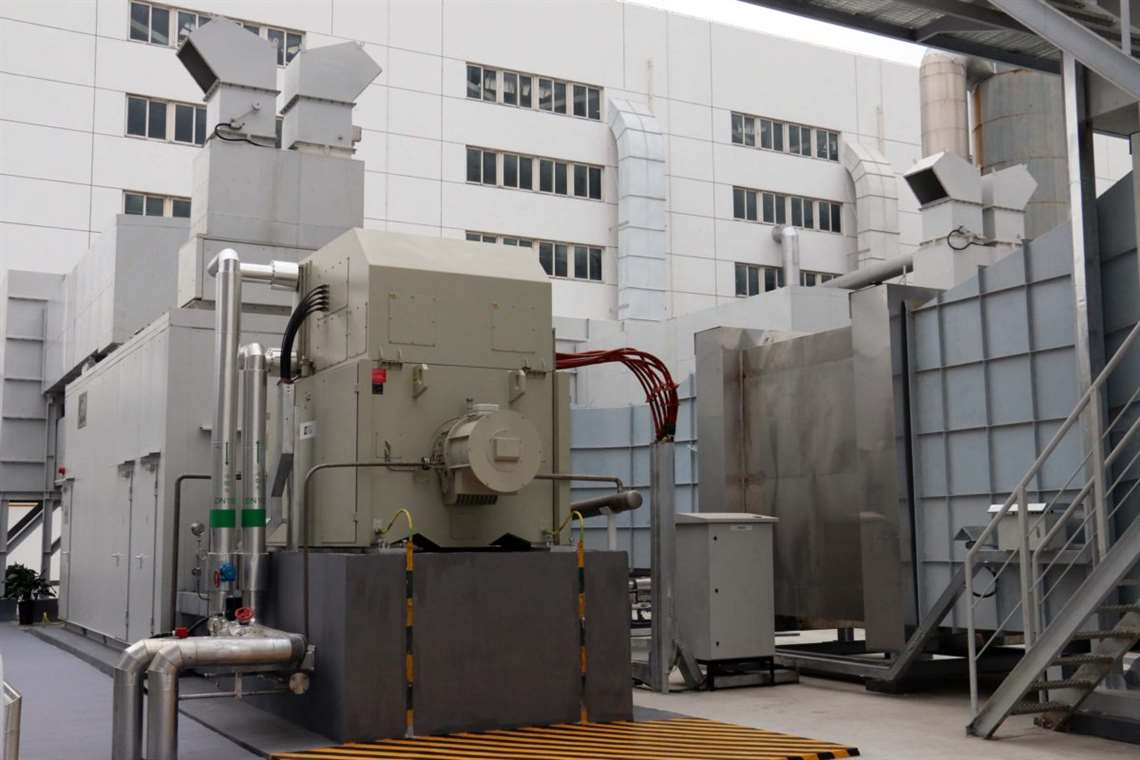 Although it was a first for MAN, company officials expect gas power plants will be growing segment in the Chinese market. Indeed, China’s National Energy Administration estimates that natural gas use in China will grow to 10% of the country’s primary energy consumption by 2020.

Manfred Biedermann, chairman MAN Diesel & Turbo China and head of the company’s business in China, said his company is poised to help the country make the transition.

“Our solutions can help to facilitate a cleaner energy production and safer supply of natural gas in China,” he said. “The Chinese government has set ambitious goals to reduce the country’s carbon footprint, and our gas engine and turbomachinery technology can help to reach these goals and to reduce emissions. That holds true with regards to energy generation, but also with regards to gas transport and the marine sector. Part of the Chinese gas strategy is to switch more than 10 000 Yangtze river boats to gas propulsion. We can help China to master this transition.”

The CHP is at SAIC Volkswagen Automotive Co. Ltd.—a joint venture between Chinese SAIC and German Volkswagen Group—and incorporates four sets of MGT 6200, the latest range of gas turbines by MAN. Each of the four turbine sets delivers electrical power by driving a generator, while additional use of the waste heat for producing process steam increases the plant’s overall efficiency to more than 80%, MAN said. The steam is used at the production works of the Volkswagen joint venture in China.

The new CHP plant fulfills this objective by producing electricity to cover 100% of the annual demand in SAIC Volkswagen Car Plant 3 and the neighboring gearbox plant in Anting, thereby reducing CO2 emissions by approximately 23%.

Biedermann said that the Chinese government has asked all companies in the country’s industrial capitals—including Beijing, Shanghai and Guangzhou—to replace coal fired boilers before 2018. That means CHP projects are likely to increase, he said.

“Obviously most coal-fired installations will be replaced by gas-fired plants and especially CHP solutions can make a valuable contribution to reducing the carbon footprint in these areas and increase fuel efficiency,” Biedermann said. “Depending on the set up, engine-based CHP installations can reach total fuel efficiencies of more than 90% and offer district heating in regions south of the Yangtse for example, which largely are still without any heating.

“Wherever process steam is needed, a turbine CHP installation will help very effectively. All in all one can say that highly efficient technologies like CHP will play a vital role in tackling the energy challenges in China.”

Biedermann said the development of the MGT 6200 was driven by the need for high efficiency as well as the desire to offer an environmentally friendly product.

“The MGT 6200 is a comparatively small machine that can be used wherever off-grid electricity is needed. From its idle state, an MGT needs less than 10 minutes to reach full-scale output.” Biedermann said. “It is also very service friendly with all parts being easily accessible by service technicians and a breaker to breaker interval of only three days.”

MAN is one of the few manufacturers to offer both engine- and turbine-based CHP solutions and works with customer to determine which technology to adopt, he said.

“We do not have any bias,” Biedermann said. “The decision on which technology to apply really needs to be made on a case-by-case basis for each and every project.

“As a rule of thumb, one can say that due to their higher exhaust gas temperature, turbines generally are the better fit for applications where large quantities of steam need to be generated. Engines, on the other hand, may be the better fit for district heating applications, as a higher overall efficiency of the CHP installation can be achieved. They also are more robust with regards to height or ambient temperatures,” Biedermann said. “The turbine’s footprint on the other hand is a lot smaller, which is beneficial if space is an issue. But as I said, there really is no black and white answer—each project needs to be looked at individually.”

MAN has been active in China for more than a century—the company installed the first MAN steam turbine in the country around 1898. MAN operates more than 750 units in China and employs 600 in Changhzou, Bejing and Shanghai, where the company received an Energy-saving & Emission Reduction Advanced Enterprise award in 2015.

“In Changhzou we run our compressor and turbine production, whereas Shanghai is our main hub for PrimeServ Diesel,” Biedermann said. “And of course we are present in all major harbors via our licensees.”

When asked about which are the better chances for success in China, and which are the key differentiating factors for a manufacturer as MAN, Biedermann said what really sets MAN apart are its deep roots in the Chinese market.

“We are an employer with a century-old footprint in this country and a strong partner of the Chinese industry. MAN has been cooperating with leading players from the marine and power sector for many years,” he said. “Our technology helps to maintain the leading position of Chinese shipyards, close to 20 of which are licensees of MAN’s two-stroke and four-stroke engines and hence build MAN engines in China. The oldest of these partnerships dates back to 1980 and have been lasting for more than 35 years already.”

The company also run research and development projects with its our licensees and supports two universities in Shanghai and Dalian for training on MAN engines. And MAN ise building power plants globally with Chinese engineering, procurement and construction  (EPC) companies, he said.

MAN recently completed a dual-fuel power plant in Bangladesh, which was built with the Chinese EPC CCC Engineering Ltd. and MTU is nearly complete with another project in Niger with Sinohydro Corp.