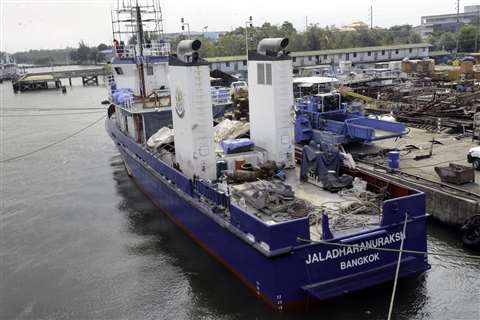 A well-built, modern marine vessel often outlives its original engines. In the case of repowers, the challenge can be to use new engines that match or exceed the capabilities of the original power units. And often modern versions of the existing engines may not be available. 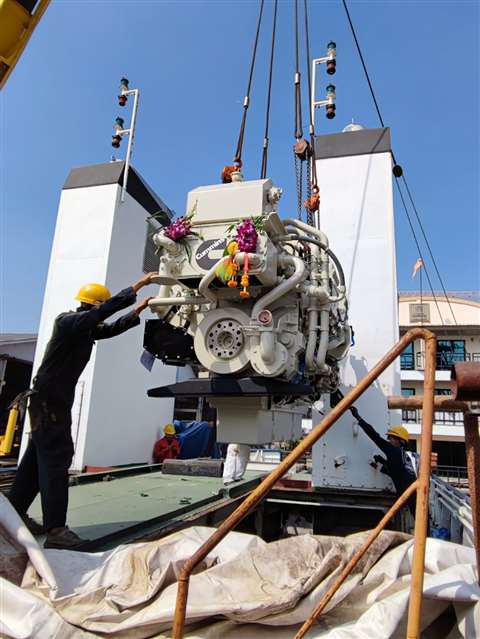 One of two QSK60 diesel engines are lowered into the engine room as part of the repower at the Asian Marine Services shipyard in Thailand. (Photo: Naris Vongtayanuvat, Cummins DKSH)

Those were some of the considerations confronting the Thai Marine Dept. when it decided to put its 41.85 x 3.9 m oil response vessel Jaladharanuraksh back into service. The ship had been laid up for some time, as parts for its original Wärtsilä CW 16V 170 diesels had become more difficult to find.

After careful review of the operational demands, which include rescue, firefighting, and pollution control, the Thai Marine Dept. selected a pair of Cummins QSK60 M engines for the repower.

The engines, along with engineering assistance, were supplied by Cummins DKSH (Thailand) Ltd. At the same time as the new engines were installed the wheelhouse was given some attention and all the electronics, from radar to sounder and gyro, were reviewed and where required, replaced with newer models.

With bore and stroke dimensions of 159 X 190 mm and an overall displacement of 60.2 L, each V16 turbocharged and aftercooled engine delivers 2700 hp (1986 kW) at 1800 r/min. The engines are teamed with new Reintjes LAF743 marine gears with 3.550:1 reduction that drive controllable pitch propellers.

The vessel’s three 267.5 kW generator sets will be overhauled and retained. 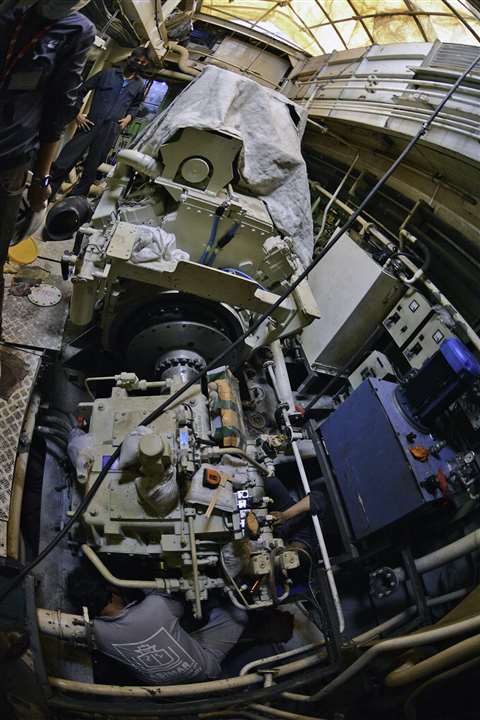 Final precision engine and shaft alignment was done after the vessel was returned to the water after drydocking. (Photo: Cummins/Haig-Brown)

With an official Buddhist blessing of the new engines, the repower was completed at the Asian Marine Services PCL. (ASIMAR) Shipyard on the mouth of the Chao Phrya River near the Gulf of Thailand. With a 40-year history of ship repair and new construction, the yard recently added a 2500 bar hydro blast system for stripping paint without the pollution associated with sand blasting.

A challenge with all repowers is to get the alignment right. With the boat out of the water in one of the yard’s floating drydocks, the shafts were pulled and inspected. The newly installed engines were then aligned with the shaft tunnel with the aid of lasers. With the shafts reinstalled, the boat was returned to the water. Working inside the engine room, the shipyard team did a more precise alignment that allows for changes that affect the hull from being in the cooling water and with the full floatation support of the water on the hull.

The ship’s refurbishing and return to service is scheduled for early this year.

A balancing act for Wärtsilä
Company secures order for six engines for power plant in US
Loading... 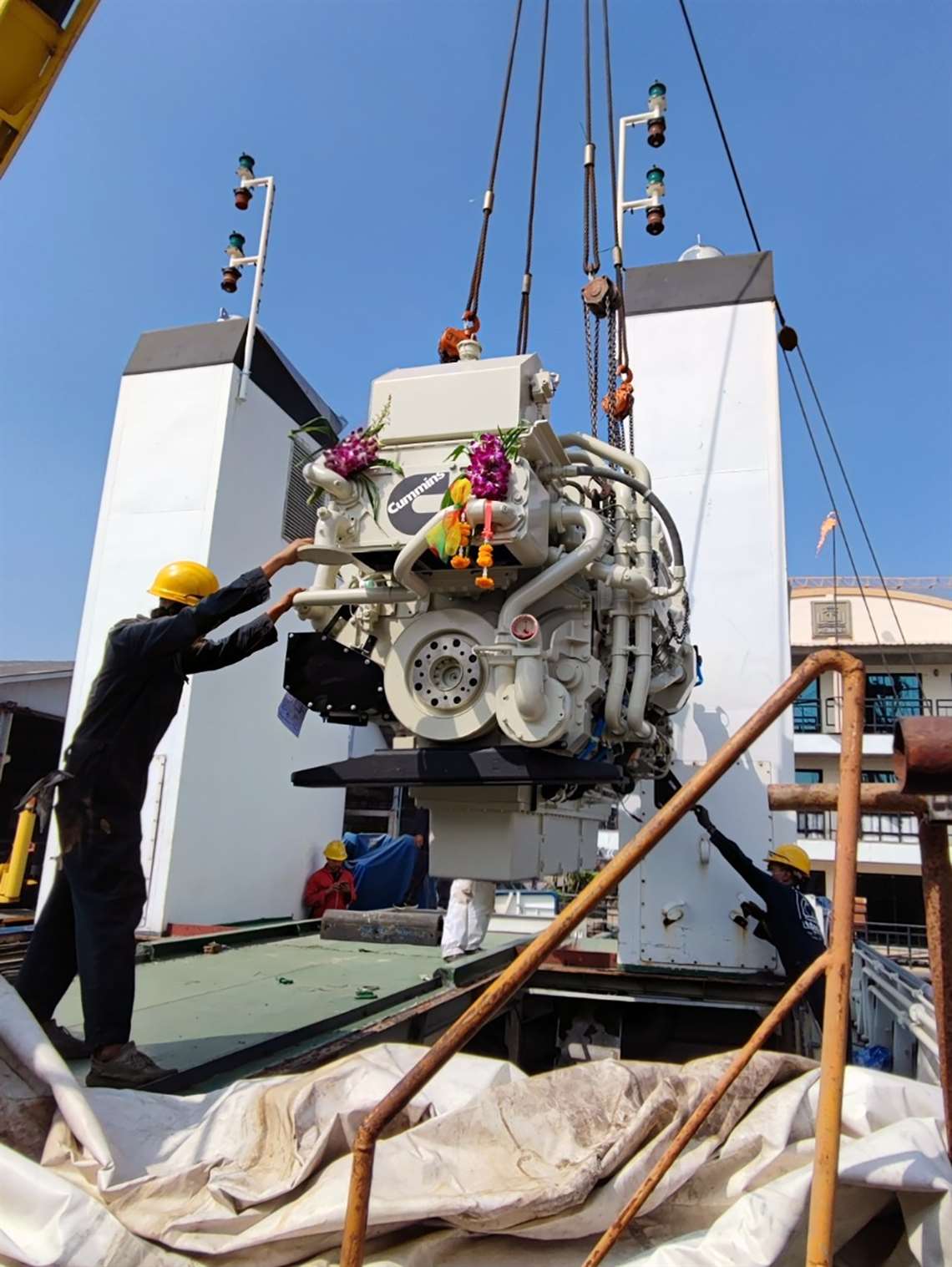 One of two QSK60 diesel engines are lowered into the engine room as part of the repower at the Asian Marine Services shipyard in Thailand. (Photo: Naris Vongtayanuvat, Cummins DKSH) 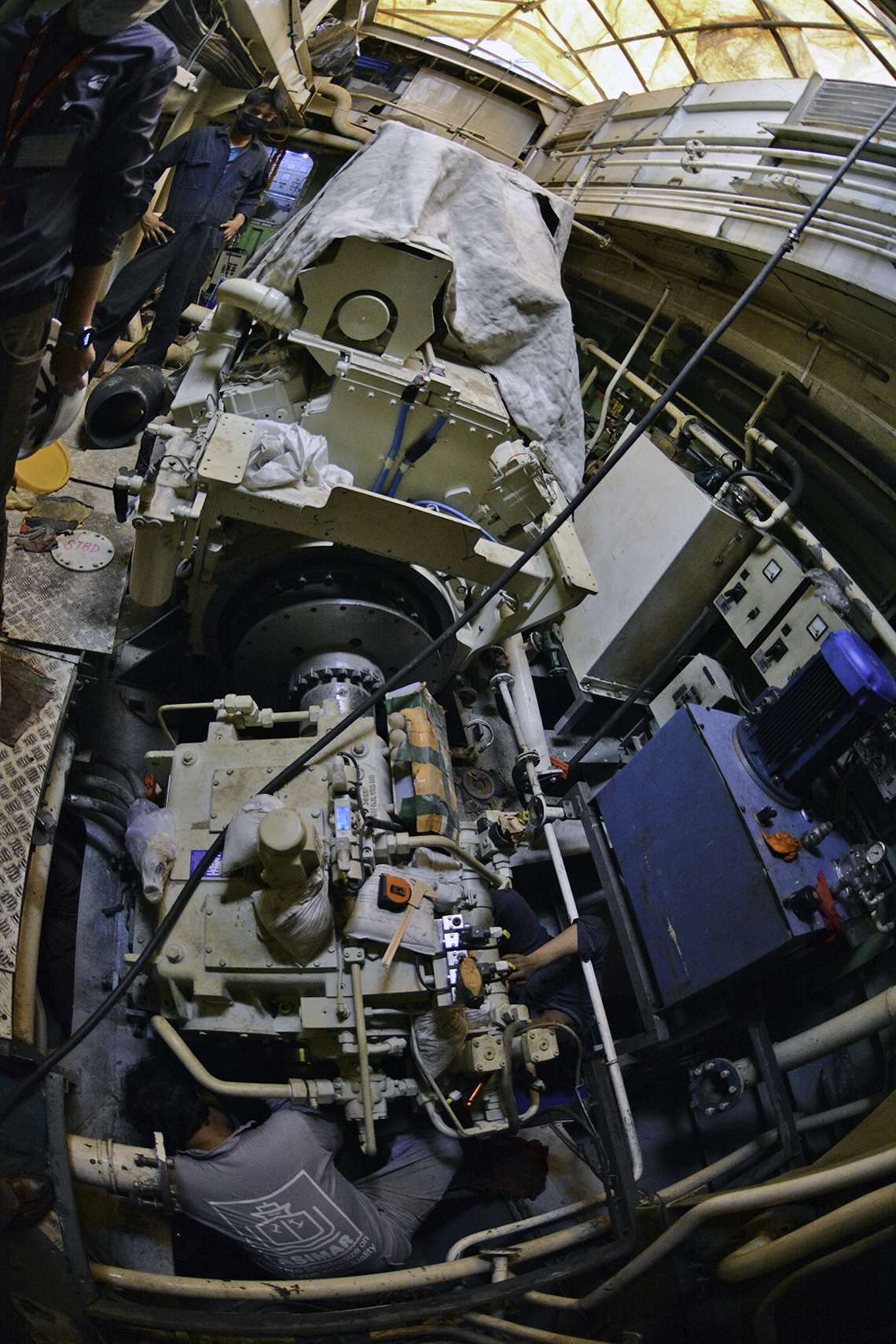 Final precision engine and shaft alignment was done after the vessel was returned to the water after drydocking. (Photo: Cummins/Haig-Brown)
Previous Next ×