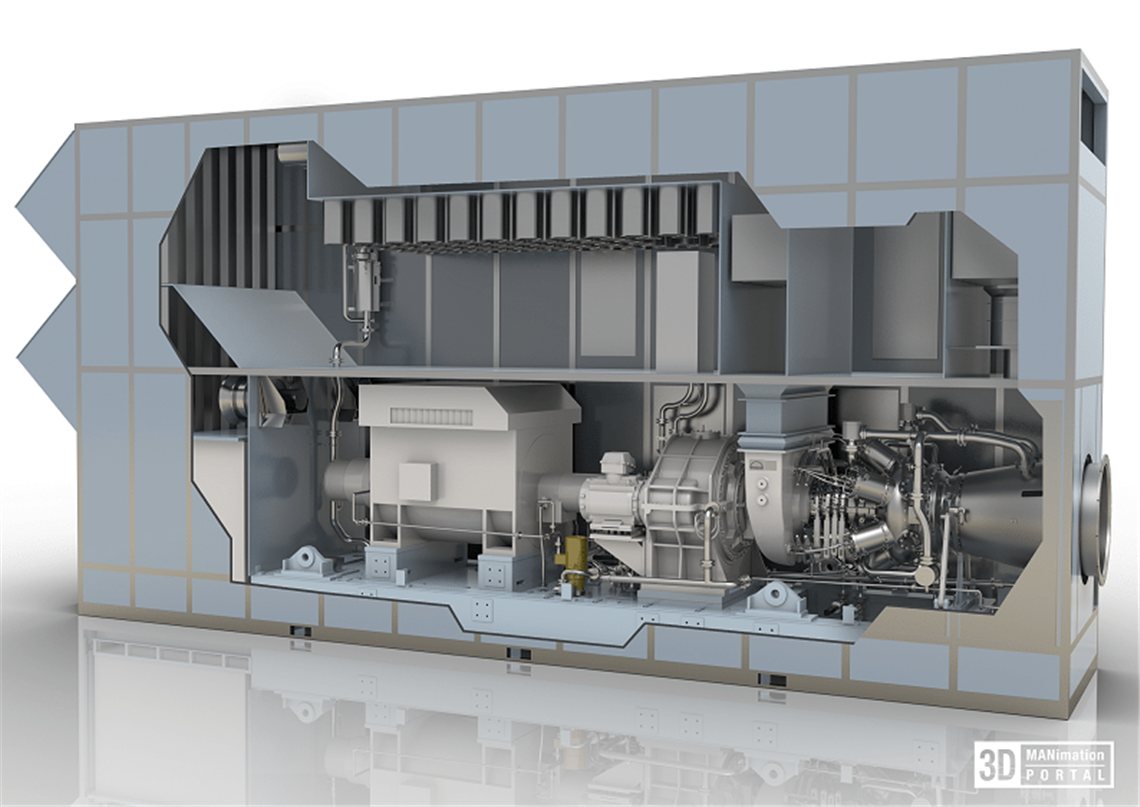 The MGT gas turbine family by MAN Diesel & Turbo (MAN) has been on the market for some time now and commissioned installations have accumulated more than 35 000 operating hours so far.

This range of products is getting more and more popular with combined heat and power (CHP) installations, with China ranking first among the geographical areas adopting this solution, MAN said.

This is testified by two new projects that are very likely to be officially announced soon by MAN; in fact, close to the publication date for this article, the company gained orders for two more turbines in the MGT series to be supplied to the People’s Republic of China. Delivered as comprehensive CHP turbine-generator packages, they will serve a plug-and-play logic for fast installation and commissioning.

Like with earlier projects in China, the packages will be delivered in cooperation with Chinese engineering, procurement and construction company (EPC) Liyu and will be put in operation for the large energy group ENN Energy Holdings Ltd., to provide power to the grid as well as heat to local industries. Diesel & Gas Turbine Worldwide will publish more details as soon as they are released by MAN.

The MGT gas turbine family has been expanded with the addition of dual-fuel capability, a move that is likely to open some new geographical markets where liquid fuels are more readily available.

With regards to emissions reduction, MAN announced that it had expanded its Dry Low NOX technology also to liquid fuel operation, meaning that lowest NOX emissions can be reached while operating the MGT turbines with light distillates as second fuel oil.

Prior to the two most recent orders mentioned above, MAN had already announced three gas-fired CHP projects with the MGT series in China. Two of them have also been designed for end user ENN Energy Holdings Ltd. The group is one of the largest distributors of clean energy in China, intensively contributing to the shift from coal-fired to gas-fired power and heat in the People’s Republic.

These two plants will be equipped with a compact gas turbine package based on the single-shaft machine MGT 6100. Each will be delivering approximately 6 MW of electric power and 12 MW of thermal power for nearby industrial zones.

Both plants replaced existing coal-fired facilities and the new CHP gas turbine installations utilize far more than 80% of the energy stored in the fuel, MAN said.

One of these plants, located in the Chinese town of Chengsha, will additionally include a MAN turbine from the company’s THM series. Upon commissioning in late 2017, MGT and THM turbines together will deliver about 17 MW of power and 35 MW of heat to an industrial park.

As a further example for MAN’s approach in China, this project, awarded to MAN in mid-2016, is carried out in cooperation with the Chinese partner Shanghai Aerospace Energy Co. Ltd., who takes on the EPC responsibility.

Ronni Su, head of sales for turbines and compressors for MAN Diesel & Turbo in the region, commented that China is an important market for MAN’s business development worldwide.

“Our solutions can help to facilitate a cleaner energy production and safer supply of natural gas in China,” he said. “As is happening in other countries too, the Chinese government has set ambitious goals to reduce the country’s carbon footprint, and our gas engine and turbomachinery technology can help to reach these goals and to reduce emissions. That holds true with regards to power generation, but also to gas transport and the marine sector. We can help China to master this transition.”

Regarding an increase in the demand for CHPs in China, Su said that the Chinese government has asked all companies in the country’s industrial capitals—including Beijing, Shanghai and Guangzhou—to replace coal-fired boilers before 2018.

“Obviously most coal-fired installations will be replaced by gas-fired plants and especially CHP solutions can make a valuable contribution to reducing the carbon footprint in these areas and increase fuel efficiency,” Su said. “Depending on the setup, gas-turbine-based CHP installations can reach total fuel efficiencies of more than 90%.

“Wherever process steam is needed, a gas turbine CHP installation will help very effectively. All in all, one can say that highly efficient technologies like CHP will play a vital role in tackling the energy challenges in China.”

With respect to the MAN MGT gas turbine series, Su said that in addition to the particularly high efficiency, one of the primary development aims was that the MGT series had to be equally economic and environmentally-friendly.

“From its idle state, an MGT turbine needs less than 10 minutes to reach full-scale output,” Su said. “It is also very service-friendly with all parts being easily accessible by service technicians; the exchange of a complete turbine can be executed in less than 48 hours.”

MAN Diesel & Turbo is one out of very few manufacturers, to offer both engine and turbine based CHP solutions and deals with the decision from the customer on which technology to adopt. “The decision, which technology to apply really needs to be made on a case by case basis for each and every project,” said Su. “As a rule of thumb, one can say that due to their higher exhaust gas temperature, turbines generally are the better fit for applications where large quantities of steam need to be generated. Engines, on the other hand, may be the better fit for applications requiring a higher electrical power output combined with district heating demand. They are also more robust with regards to altitude and ambient temperatures. The turbine’s footprint, on the other hand, is a lot smaller, which is beneficial if space is an issue. But as I said, there really is no black and white answer—each project needs to be evaluated individually.”

MAN looks back at a century-long history in China, where the company installed the first MAN steam turbine as early as 1898. “To date, MAN operates more than 750 turbomachinery casings in China and we employ approximately 600 people in our main locations in Changhzou, Beijing and Shanghai,” Su added.

An MGT 6200 two-shaft gas turbine has been adopted in the compressor station in Rehden, Germany, operated by Gascade Gastransport GmbH, one of Germany’s largest gas transportation companies.

One of MAN’s strengths in this application field is the train competence—the capability of designing a precisely coordinated installation of turbine and compressor. In Rehden, for example, the company said that the system design allows it to capture even the low volume of seal gas leakage from the compressor and return it to the gas system, rather than dispersing it into the atmosphere.

Market introduction in the 6-MW power class has been proven with projects in both power generation and mechanical drive applications, referencing both single and two-shaft design. This was followed by launching a dual-fuel version and options for reduced emissions, especially NOX. Recently, the company included 3D printing technology to the manufacturing of the MGT series. According to MAN, next development steps will include additional power classes, integrating the positive feedback from the market.