The marine turbine will be used with the prototype of the Cryo-Powered Regas, an LNG cold energy use regasification system developed by Mitsui O.S.K. Lines, Ltd. (MOL) and Daewoo Shipbuilding & Marine Engineering Co. (DSME). The CryoPowered Regas aims to reduce the environmental impact of Floating Storage and Regasification Units (FSRUs) by utilizing LNG cold energy – which up to now has been dumped into the ocean – for power generation.

LNG is produced by compressing natural gas into about 1/600 of the original volume by cooling it to approximately −162° C at close to atmospheric pressure. Before it can be used, LNG must be regasified and during that process, a considerable amount of cold energy is released, roughly 200 kWh of cold energy is produced in the regasification of 1 ton of LNG.

The role of an FSRU is to regasify -160℃ liquified natural gas (LNG) through heat exchange. In the past, LNG’s cold energy had not been utilized in FSRUs and was released. By installing the “CryoPowered Regas” System, such cold energy will be transferred to another heating medium, and the generated steam will be sent to a turbine to generate electricity, which results in reducing FSRU’s fuel consumption and CO2 emissions. 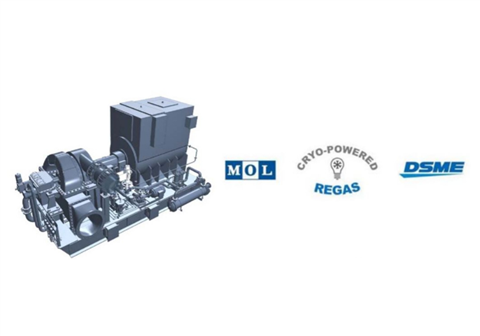 A small-scale version of the “Cryo-Powered Regas” system was built in DSME’s R&D premises. The turbine generator used in this system was designed and constructed by MHI-MME specifically for the system. Through this test, MOL and DSME verified that the system could successfully generate electricity up to its rated capacity. The result of this demonstration test confirms that through the

utilization of the “Cryo-Powered Regas” System, fuel consumption and CO2 emissions of new generation FSRUs can be reduced by 50% at maximum rated regas flow rate (*2) compared to conventional existing FSRUs.

The Cryo-Powered Regas system is a cold power generation technology based on the Organic Rankine Cycle. The new technology is expected to significantly reduce the fuel consumption and CO2 emissions of FSRUs during regasification. As part of development, verification tests are scheduled to take place at a small, land-based facility. In addition to supplying a power-generating turbine to the facility, MHI-MME is also providing technical support toward the future installation of the turbine on ships. This will be MHI-MMEʼs first marine turbine for cryogenic power generation, and the company said it will be developing a cutting-edge design while also leveraging the MHI Groupʼs existing technology and expertise in land-based products. MHI-MME has long been providing support for energy saving on ships, with a focus on waste heat recovery systems (WHRS) for large commercial vessels. With the sharp increase in the use of LNG by the maritime industry, MHI-MME sees the cold energy arising from LNG use as a promising, recoverable energy. The company is proactively engaged in this effort with the view that it can contribute to the achievement of a low-carbon society by expanding the range of its energy-saving solutions.