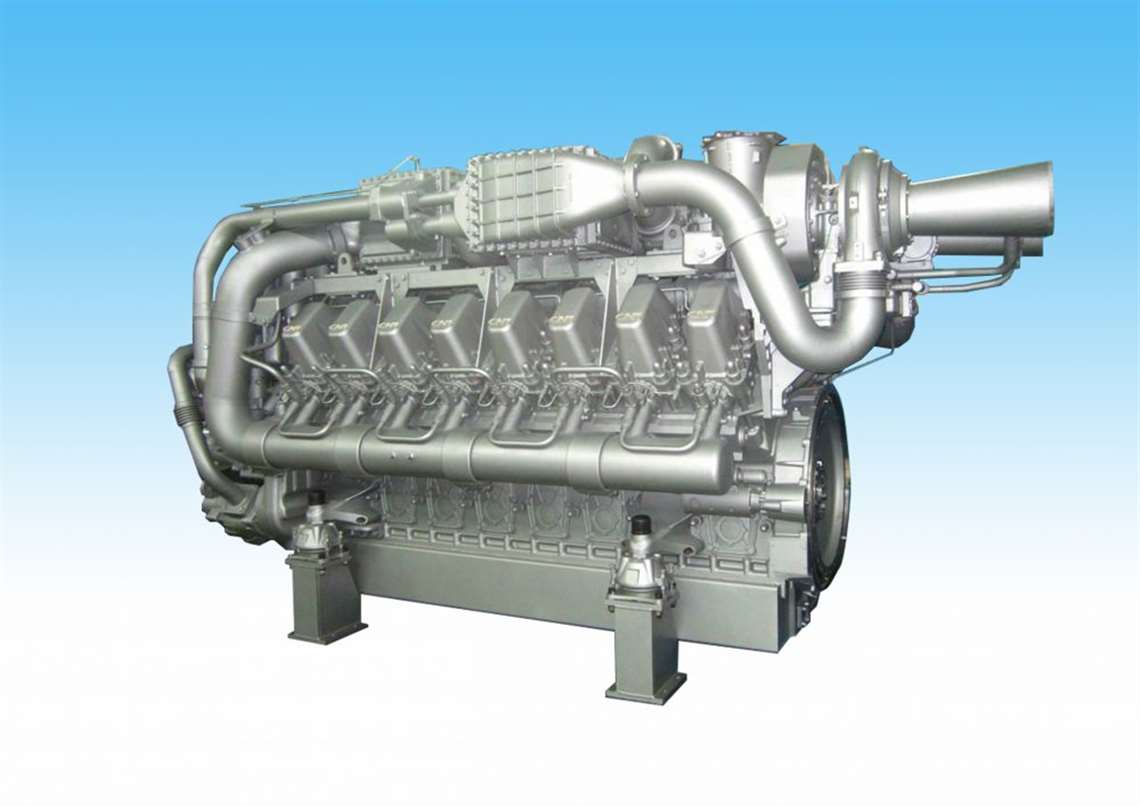 China-based Dalian CRRC Diesel Engine and AVL List have teamed to develop a high-speed diesel engine platform for domestic Chinese applications but also works as a “solid foundation” for expansion into export markets.

The first engine, the 16-cylinder D180, has a bore and stroke of 180 x 215 mm and offers 275 hp/cyl at 1800 rpm. The D180 was designed for locomotive applications, but the engine family also will consist of 8V, 12V, 16V and 20V versions that can also be used for higher volume marine and power generation applications. The new engine family was described during the recent CIMAC Congress 19 in Vancouver, British Columbia, Canada.

From the very beginning of the concept phase, and throughout the project, the focus was placed on component design for manufacturing and component commonality to support the later industrialization of this engine, according to Thomas Kammerdiener, chief engineer at AVL. An engine solution was implemented to balance the requirements of multiple markets.

The end result is a “world-class, high-performance engine,” Kammerdiener said in presenting the new engine family.

The engine design incorporated application-specific targets, such as overall installation dimensions, weight and efficiency targets, which included a compact crankcase and single geartrain. The stringent packaging requirements for the engine installation in the locomotive set the boundary conditions for the conception of the engine dimensions and target weight of the engine (12,500 kg).

A 90° configuration was chosen as the best compromise between engine width and height. This ensured a compact power package considering the space needed on top of the engine for disassembly and easy access to turbocharging and aftertreatment components.

The cylinder head was designed for a peak firing pressure of 250 bar. The design makes use of a crossflow port arrangement and a parallel valve pattern with four M30 head bolts, still ensuring an appropriate head gasket pressure distribution.

Cooling was addressed through a two-stage aftercooler and two-stage high and low-temperature interstage cooler, which is teamed with AVL’s patented top-down cooling (TDC) cylinder head configuration.

Specific technologies, such as two-stage turbocharging, common rail fuel injection with injection pressures up to 2200 bar and a quiescent ultra-robust combustion system, are the building blocks to achieve EU3A and EU3B emission compliance and the rated fuel consumption target (BSFC) of 195g/kWh, he said.

With domestic and global emissions legislation such as EU Stage 3B, US EPA Tier 4 and IMO3 in mind, an aftertreatment system was developed in parallel to the engine development and tested together with the D180 engine. Although initially tailored for the locomotive application, a modular aftertreatment packaging design enabled the combination and testing of SCR, DOC and DPF hardware.

“The packaging of an aftertreatment system on a locomotive can really be a pain and a challenge,” Kammerdiener said.

The SCR dosing rates were calibrated with regard to the required NOx conversion rates at each operating point, Kammerdiener said.

The main target of these tests was to successfully validate EU3B emission compliance by use of only an SCR module without DOC and DPF. An additional implementation of the DOC + DPF module is a protection against future requirements, especially for selected export markets, where DPF has become state of the art for railway operation.

Hoerbiger’s DriveCOM system, a modular, scalable and integrated engine control technology, was selected for the D180.

Specific railway approval tests are planned this year, as are the first test installations on locomotives. The field tests are scheduled for 2020, as is the introduction of the V20 engine. The V8 and V12 derivate engines should be ready for introduction to the market in 2021, with diversification into further applications later on.

CRRC Dalian Co. Ltd.’s locomotive factory was founded in 1899 in Dalian. The company’s primary products are railway rolling stock and related parts with a production capacity of approximately 600 locomotives and 300 metro rail vehicles per year. Since 2012, CRRC Dalian built more than 500 locomotives with high-speed large engines.