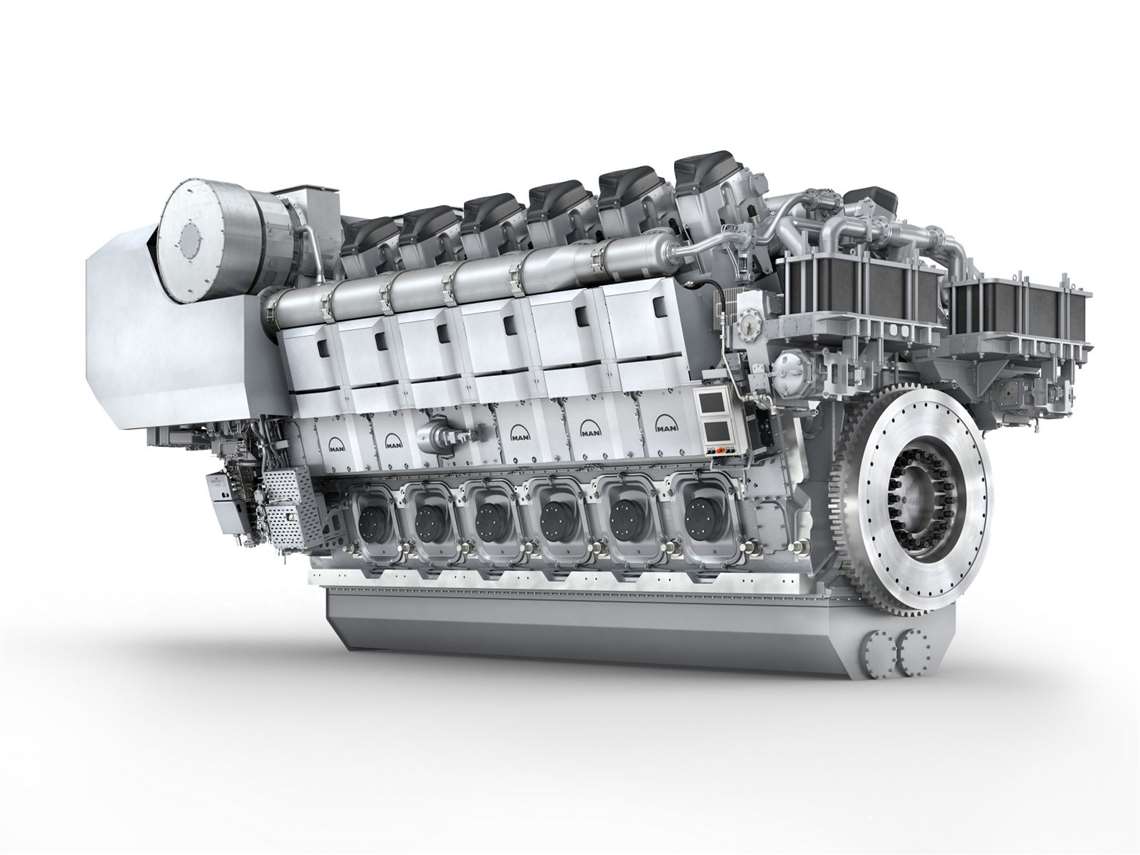 MAN has revealed the successor to its 48/60CR engine in the company’s line of high-performance diesel engines.

The new MAN 45/60CR marine diesel engine will initially be available as 12 and 14 V versions with power outputs of 15 600 and 18 200 kW respectively, with inline versions following at a later date. For land-based power generation applications, MAN has developed the 20V45/60 (see related story here) that offers 26 MW.

“The new engine combines the best features of the current 48/60CR, such as MAN’s common-rail system with ECOMAP capability, and adds new technologies such as two-stage turbocharging for an unrivaled Specific Fuel Oil Consumption,” said Wayne Jones, chief sales officer of MAN Diesel & Turbo. “The resultant reduction in operating expenses and positive environmental impact are sure to attract strong market interest.”

MAN Diesel & Turbo said that the 45/60CR’s power increase and low fuel consumption are particularly aimed at such key, lifecycle-cost-oriented applications as cruise liners, RoPax ferries, RoRo vessels and dredgers. The company said it will follow the 12V and 14V options with 6 to 10 L variants later. MAN said that the engine was conceived from the beginning as a family of engines that will accommodate future derivatives such as dual-fuel.

The first set of V-type engines will be available beginning in late 2020 with delivery of the first L-type engines in 2022.

“With this engine, innovative engineering meets the vast experience of a world market-leader in four-stroke engine design,” Jones said. “MAN’s 4x family has accumulated millions of operating hours all over the world and we have listened closely to the needs of our customers. “Accordingly, we knew exactly where we wanted to go in engineering the next generation of this global success story: We were aiming for a game-changing level in power density and efficiency, and we accomplished that mission.”

Dr. Gunnar Stiesch, head of Engineering Engines at MAN Diesel & Turbo, said: “Next to a frontloading approach, using thermodynamic engine process calculations, we used computational fluid dynamics to simulate and optimize the combustion process. Also, finite elements analysis was used to optimize the engine’s mechanical strength and vibration behavior. We then put the power unit to the test on the world’s largest, four-stroke, single-cylinder test engine and started the experimental optimization and validation phase.”

“Thanks to the new SaCoS, the MAN 45/60CR is not only online-ready but also equipped for the digital future of power generation,” Stiesch said.

“We are the only company in the market that develops both engine and turbochargers,” Stiesch said. “This unique, in-house competence allows us to truly tailor-design this engine for optimized two-stage turbocharging and to unleash its full potential. It’s also noteworthy that, despite the turbo-charging being two-stage, load pick-up behavior is the same as for the single-stage turbocharged 48/60CR engine. Operators thus profit from maximized peak pressure and optimal utilization of the Miller Cycle.”

The 45/60CR is designed for a wide range of marine applications, especially applications with high power-demands like ultra-modern cruise vessels, large RoPax and RoRo ferries, as well as mega-dredgers. Its primary focus is on reliable power generation, performance flexibility and superior efficiency in either diesel-electric or diesel-mechanical configurations.

Calculations, based on a representative load-profile of a cruise vessel, show that a ship operating with a MAN 45/60CR engine can enjoy a fuel-oil cost benefit of 5 to 12% in comparison with a vessel powered by an equivalent engine from other manufacturers. For a cruise vessel of around 120 000 – 150 000 gross tonnage with 60 – 65 MW of installed power and an assumed fuel price of 500 EUR/t, this translates into annual savings of 0.9 to 2.4m EUR when employing the 45/60CR.

The new engine combines the proven characteristics of its predecessor – the MAN 48/60CR – including its in-house common-rail injection system, with the latest innovations in diesel-engine technology such as two-stage turbocharging as previously mentioned here.

The MAN V45/60CR can also be combined with the innovative MAN ECO-MAP 2.0 technology that grants operators the flexibility to run an engine following different SFOC power characteristics, facilitating optimal efficiency at different load points. The latest development with this innovative technology is the integration of the MAN SCR system into ECOMAP, offering even further possibilities to optimize the efficiency of the propulsion system, taking into account fuel and urea prices.