Engine maker to be part of Power Solutions division along with Marelli Motori, Piller Power Systems

The new owner of Bergen Engines plans to expand the company’s reach into what it sees as the rapidly developing microgrid power generation sector.

Langley Holdings, which completed the acquisition of the Norwegian Bergen Engines group from Rolls-Royce for €91 million, said the engine maker will operate as a standalone business unit focused on the microgrid market as well as its traditional markets.

“The acquisition of Bergen Engines is a major step towards our net-zero objectives,” said Chairman & CEO Tony Langley. “The company has a superb reputation and is proving to be highly innovative in adapting its engines to low-carbon and non-fossil fuels. Coupled with that, the emerging microgrid sector fits perfectly to our long-term sustainability goals.”

Bergen Engines produces medium-speed liquid and gas-fueled engines and generator sets supplied to a broad range of land-based, commercial marine and naval customers. The tradition of engineering in Bergen, Norway, dates back to 1855 when the original company Bergen Mekaniske Verksted (BMV) was founded. In 1946 the company built its first diesel engine and has since commissioned over 7000 engines. More than half of them are still in operation today,

Completion of the sale to Langley, which was announced in August 2021, follows the conclusion of work to separate the business from the Rolls-Royce group. The deal included €16 million of cash held within Bergen Engines AS that has been retained by Rolls-Royce, which purchased Bergen in 1999.

In 2021, Bergen Engines generated revenues of approximately €250 million with the assets and liabilities of the business presented as held for sale in the Rolls-Royce Holdings plc consolidated balance sheet.

The Bergen Engines group employs almost 950 people worldwide, of which more than 600 are based at its headquarters and production facilities near Bergen, Norway.

Langley said the company will take part in a €4 million research project to be funded jointly with the Norwegian government. The AMAZE (Ammonia Zero Emissions) project is developing the use of ammonia as an alternative fuel for ship’s engines.

The Power Solutions Division is expected to generate around €600 million of Langley’s anticipated €1.3 billion revenues in 2022. The Division employs around 2400 of the group’s 5,600 total global workforce. 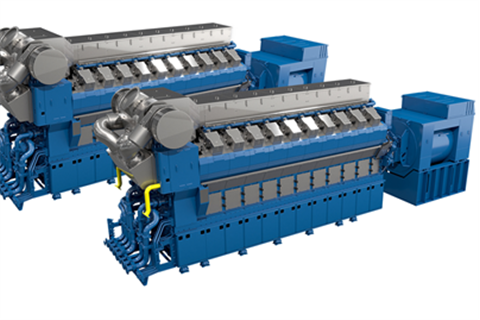