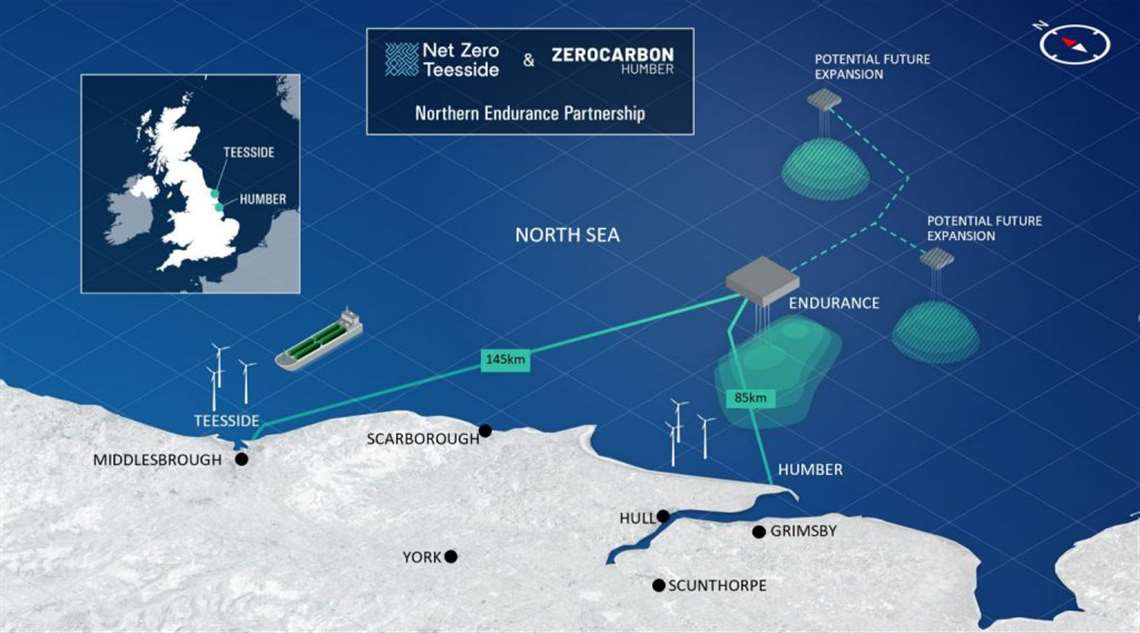 Six of the world’s biggest energy companies have joined forces on a project they say could cut the UK’s industrial emissions in half.

With bp as operator, the infrastructure will serve the proposed Net Zero Teesside (NZT) and Zero Carbon Humber (ZCH) projects that aim to establish decarbonized industrial clusters in Teesside and Humberside. The projects are designed to help kick-start decarbonization of industry in two of the UK’s largest industrial clusters. Both aim to start up in 2026, with realistic pathways to achieve net zero as early as 2030 through a combination of carbon capture, hydrogen and fuel switching, the companies said.

The NEP, which aims to accelerate the development of an offshore pipeline network to transport captured CO2 emissions from both NZT and ZCH to offshore geological storage beneath the UK North Sea, has submitted a bid for funding through Phase 2 of the UK Government’s £170 million Industrial Decarbonization Challenge. This is part of the £4.7 billion Industrial Strategy Challenge Fund set up by the government to address the biggest industrial and societal challenges using UK-based research and development.

The UK government has committed to the country achieving net zero emissions by 2050 and, as the Committee on Climate Change (CCC) has stressed, carbon capture, utilization and storage (CCUS) is critical to achieving this, the companies said. Without it, the target poses a real challenge to the future of British industry and jobs, as CCUS is the only way to decarbonize many industries.

The Humber is the most carbon-intensive industrial cluster in the UK, emitting 12.4 million tonnes a year, while Teesside industries account for 5.6% of the country’s emissions. The region is also home to five of the UK’s top 25 CO2 emitters.

The application follows the approval by the Oil and Gas Authority (OGA) of the addition of bp and Equinor alongside National Grid to the CO2 appraisal and storage license covering the Endurance reservoir.

This affirms the strategic importance of the Endurance reservoir (located about 145km off the coast from Teesside and around 85km from the Humber coast) as the most mature and large-scale saline aquifer for CO2 storage in the offshore UK Continental Shelf, that can potentially enable industrial decarbonization from both clusters.

“The formation of the NEP is another significant milestone towards developing the offshore infrastructure that will be needed to safely transport and store CO2 from CCUS projects along England’s east coast,” said Andy Lane, vice president of CCUS solutions at bp and managing director for Net Zero Teesside. “The partnership and our joint bid demonstrate industry’s willingness to come together and collaborate wherever possible to accelerate making CCUS a reality in the UK, helping to decarbonize the local economy and contributing to the UK’s climate goals.”