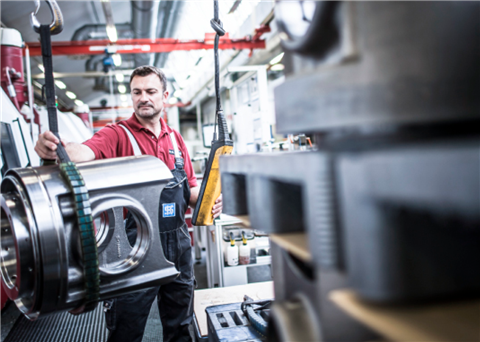 The contract encompasses Rheinmetall’s large-bore pistons business, including the three production plants in Germany, the United States and China as well as the steel piston line of its small-bore pistons plant in Marinette, Wis. Conclusion of the transaction is expected to occur Dec. 31; terms were not disclosed.

The sale is part of the group’s reorientation that started in 2021. Among other things, the move aims to reduce the group’s earlier business in products relating to the internal combustion engine. Rheinmetall’s decision to step away from its pistons business involves its small- and large-bore pistons operations, which since then have operated as a non-core business of the group’s Materials and Trade division. Rheinmetall said it began reviewing offers for individual participations or piston-related parts of the company in February 2022.

“It was Rheinmetall’s stated goal to leave its pistons production operations in good hands,” said Marcus Gerlach, chairman of the board of management of the Materials and Trade division. “We have now achieved this in the large-bore pistons segment. The KVAB group of companies knows the large bore engine market very well and wants to invest long term.”

KVAB reportedly considers the business unit’s employees to be the company’s most important capital, underscoring its desire to take over the entire staff.

Rheinmetall’s large-bore pistons business currently has around 290 employees in Neckarsulm, Germany; Kunshan, China; and the U.S. state of Wisconsin. The employees of the steel pistons line at the small-bore pistons plant in Marinette, Wis., will also be taken over.

KVAB said running its companies as autonomous standalone units with a separate organization is important, which is why it places great emphasis on working together with the existing management team.

The new company’s CEO will be Ralf Remmler, who up until now has served as head of the large-bore pistons business unit. The Kolbenschmidt and KS brands will in future remain in the “KS Large Bore Pistons” company, meaning no outward change is expected. A new company called KS Large Bore Pistons Germany GmbH is being set up in Germany, while the two existing companies in the U.S. (KS Large Bore Pistons LLC) and China (KSLP China Co. Ltd) will convey directly.

KVAB is a manufacturing group with locations in Sweden, Finland, Estonia, France, the Czech Republic and China.