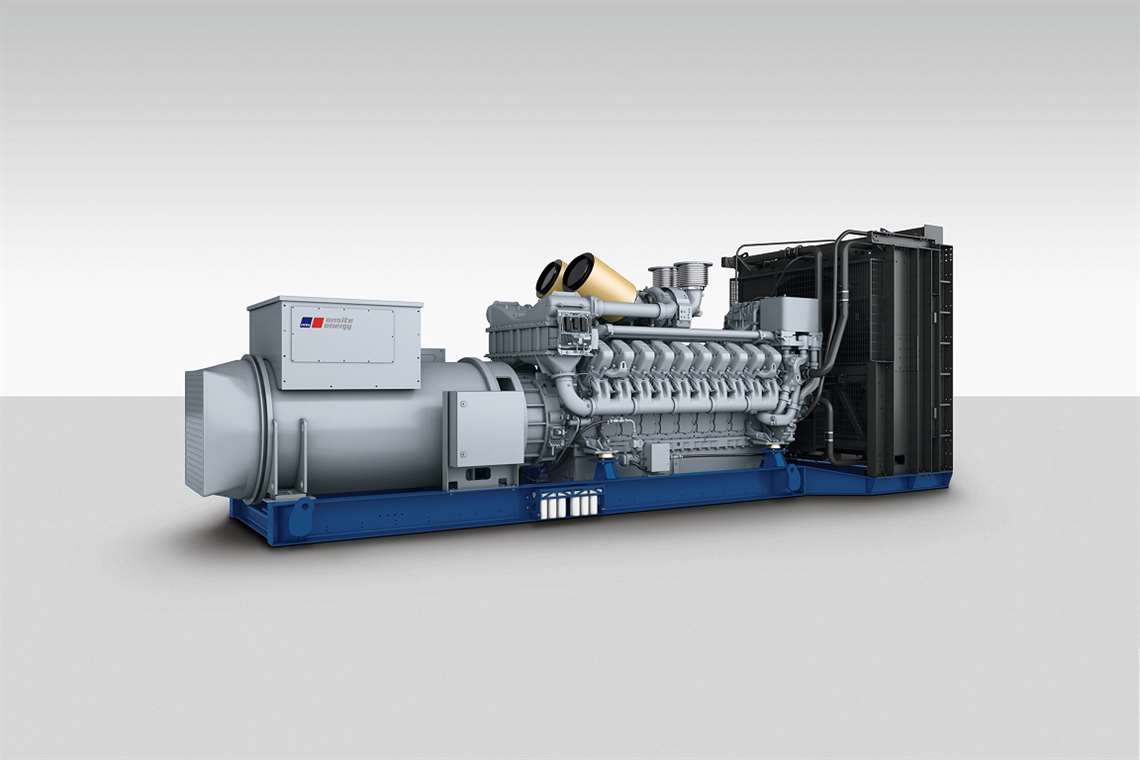 More than 30 of these new units are already set for delivery in 2018, Rolls-Royce said. Most of the initial consignment, supplying 75 MW overall, is destined for a global internet group to generate standby power for its European data center. MTU Onsite Energy has already announced further advancement to an even higher level in the form of the 20V 4000 DS4000 diesel genset delivering roughly 16% more output, amounting to as much as 3200 kW of electrical output, compared with previous offerings.
The 95.4L engine has a bore and stroke of 170X210 mm. It incorporates a Leroy Somer medium voltage generator.
Steadily increasing power demands in mission-critical applications, like those encountered in data centers, airports or hospitals, necessitate the use of ever more powerful engines – such as the enhanced Series 4000 from MTU – to allow the gen-sets to step in smoothly and cover demand should a contingency arise, the company said. Performance has been boosted by optimizing engine design to allow for a higher BMEP (brake mean effective pressure) in the cylinders, and fitting a redesigned turbocharger and modified peripheral equipment with some astutely matched components.
“In-house expertise in all the key technologies involved here, coupled with state-of-the-art simulation and analysis tools, have allowed us to develop a generation of engines with which the new diesel gen-set can even beat the standard,” said Andreas Görtz, director Power Generation Business at Rolls-Royce Power Systems.

One reason is the high engine load factor which allows the standby gen-set to be operated at 85% of its maximum power on average – a value which surpasses the requirements set out in ISO-8528-1 by 15%. The generator also can run for up to 500 hours a year in its vital standby power role. This value goes way beyond the 200 hours specified in the standard, the company said.
“In case of a power outage, delivering a dependable power supply in a matter of seconds is key,” Görtz said. “Data centers with their sensitive IT facilities present the additional challenge of mitigating fluctuations in voltage and frequency. These gen-sets have therefore been developed to curb these variations by design. Receiving the first order for the new gen-set from a global player in the Silicon Valley is a great honor.”
Series 4000 gen-sets comply with VDE guidelines (the German Association for Electrical, Electronic & Information Technologies) and are certified for mains parallel operation. This allows users to feed power into the public grid at a profit as well as safeguarding supply in case of an emergency, the company said. Earlier models of this Series 4000 engine have a proven track record with over 23 000 units sold for power generation applications.