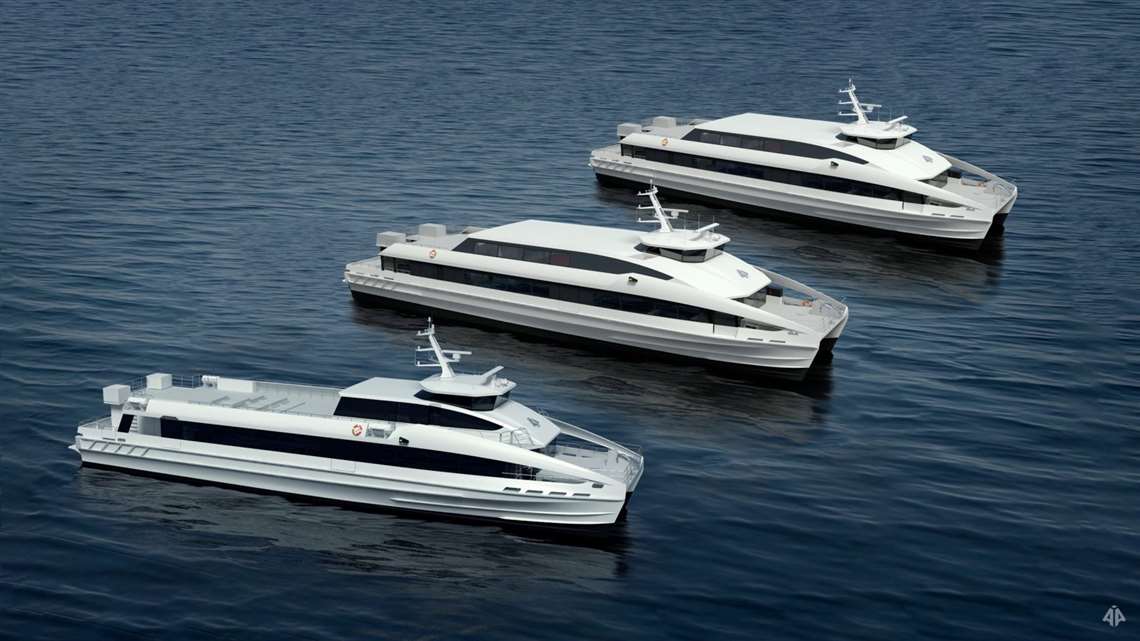 Rolls-Royce will deliver Kamewa waterjet propulsion units and MTU engines for three 42 m high-speed carbon fiber ferries for operation between Hong Kong and Guangzhou, China. The vessels will be built at the Brødrene Aa shipyard in Norway. The same shipyard has also ordered Rolls-Royce propulsion for two similarly-sized ferries to serve routes in the north of Norway.

Two of the three vessels ordered will have a 300-passenger capacity and will operate at a maximum speed of 40 knots. They will have a quadruple Kamewa type S56-4 waterjet installation and four MTU 12V 2000M72 engines. The diesel engine offers 1448 hp and bore and stroke of 135 X 156 mm.

The third will carry 230 passengers, with a maximum operating speed of 37 knots. This ship will be powered by two MTU engines 16V 2000M72 offering 1930 hp and each driving a type S63-4 waterjet.

According to Tommi Viiperi, general manager Sales at Rolls-Royce, these two contracts prove the high trust placed in Kamewa waterjets and MTU engines in both Norwegian and Chinese markets.

“The products selected and choice of materials and technologies are made for creating unchallenged performance, durability and the lowest cost of ownership,” Viiperi said. “The efficiency of both steering and reversing units, together with pump performance, help owners to reduce their operational costs. The features included in our equipment are much appreciated in today’s market where there is no room for compromise on performance or efficiency.”

The duplex stainless steel construction of these Kamewa waterjets is designed to offer durability compared with competing products. The fuel savings resulting from the highly efficient pump unit, combined with the design of the steering and reversing units, aids faster and more accurate maneuvering.

“With vessels operating long hours at speeds of 40 knots you really capitalize on the benefits of carbon fiber construction. Lighter vessels render lower fuel consumption and reduced emissions,” said Tor Øyvin Aa, CEO of Brødrene Aa. “The lightweight and high-power capabilities of the Kamewa steel series waterjets, along with the proven power output and reliability of MTU engines in fast ferries, makes Rolls-Royce a logical choice for this type of vessel. However, the shipowners as always took the final decision about the main components, including the main engines and the waterjets.”

The Chinese ferries are to be operated by Zhongshan-Hong Kong Passenger Shipping Co-op Co Ltd.

“China is a very important market with great potential for us,” said Knut Müller, head of Marine and Governmental Business at MTU. “In China and in the region around Hong Kong there are currently over one hundred high-speed ferries fitted with MTU propulsion systems in operation. We are delighted that with Brødrene Aa, with whom we have already collaborated on 25 other ferry projects, we have the opportunity once again of serving the Chinese market.

“High-speed ferries operate continuously at high speeds. For this reason, the engines must above all operate reliably over a long service life. MTU satisfies these demands placed on the engine with MTU’s own turbocharger technology incorporating sequential turbocharging, which provides effortless power response at low engine speeds.”

The two Norwegian ferries have been ordered by the Nordland Fylkeskommune county municipality and will operate the Bodø-Sandnessjøen and Bodø-Svolvær coastal routes, jointly known as Nordlandekspressen.

The new ferries can carry 220 passengers plus 16 freight pallets weighing a total of 8 tonnes. The four MTU engines of the type 10V 2000M72 in each vessel will provide a service speed of 32 knots. Thanks to the efficient design of ship and propulsion plant, plus the light weight resulting from the carbon fiber reinforced sandwich construction, fuel consumption is anticipated to be around 30% lower than the existing ships.

The Nordlandekspressen ferries will be delivered in December 2018 and February 2019, while the Chinese vessels are scheduled to be delivered to Hong Kong by June 2019.