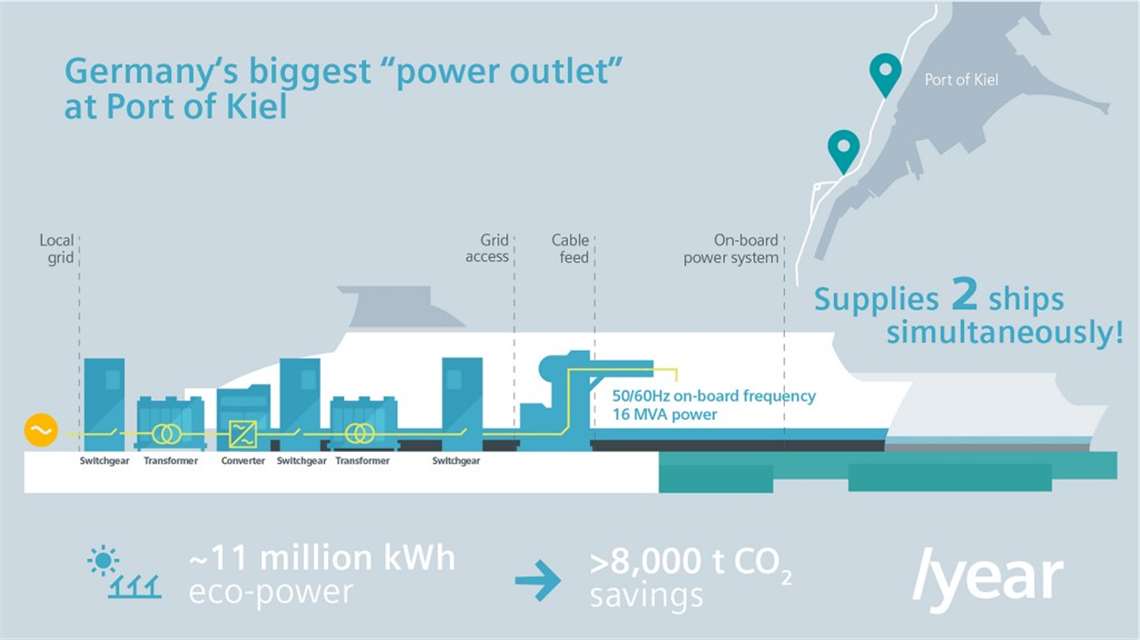 The Siharbor solution will supply two ships simultaneously and will reduce annual CO2 emissions by more than 8000 tons, the company said. With the Siharbor shore connection, berthed ships can draw the needed energy from onshore and shut down their generators, thus meeting the environmental regulations. Siharbor is designed to provide a fast, simple and flexible connection to the ship via a cable management system.

The Siemens installation consists of one substation with four Geafol cast resin transformers, four air-insulated medium-voltage Nxair switchgears as well as one 16-MVA frequency converter. The cast resin transformers with a rated power of six and 16 MVA are especially suited for challenging environmental conditions, such as the salty air present at the port. The switchgear is robust and has a compact design, making it suitable for this application.

The system is expected to go into test operation within the 2020 cruise ship season. The port is the point of departure for cruises and has ferry connections to the Baltic states and Scandinavia. Thirty-two different cruise ships stopped in 174 times at the port facilities in 2018.

“By building this new shore power system we will actively support the climate objectives of the Schleswig-Holstein state capital,” said Dr. Dirk Claus, managing director with the Port of Kiel. “The shore connection system lets us draw electricity from renewable energy sources, both for cruise ships docked at the Ostseekai and for the ferry at the Schwedenkai. We thereby take on a leading role and consistently implement our Blue Port concept for a sustainable and future-oriented development of the Port of Kiel. In future 60 percent of the energy demand required by the ships entering Kiel will be covered by climate-friendly shore power as diesel generators will be shut down while they are berthed.”

For an uninterrupted and efficient power supply of the mooring ships the Siemens converter system “Siplink” is used. It uses a frequency converter and a software for central controlling of the two berths. With the system, two medium-voltage networks with different frequencies can be connected. In this case the local distribution grid with 50 Hz and the ship’s onboard electrical system with 60 Hz. Siplink synchronizes both networks and takes over the power supply automatically within a few minutes. In addition, it coordinates the energy supply of the ships’ two networks so that power can be supplied to both simultaneously.

“With this set up, we are able for the first time to supply two ships simultaneously with the necessary 60-Hz onboard frequency by means of one shore power system,” said Axel Mohr, head of sales for Distribution Systems, Region North, at Siemens Smart Infrastructure. “We’re excited to support the Port of Kiel with this sustainable solution, thereby taking on a leading role in Europe together. Such systems will become increasingly important in the future, also outside of Germany, as climate protection goals are implemented.

With its “Master Plan for 100% Climate Protection”, the City of Kiel has an ambitious roadmap to be CO2-neutral by 2050. The new shore power system at the Port of Kiel aims to support this goal with the reduction in CO2 emissions it will bring. The shoreside power supply installed by Siemens in the spring of 2019 at the Norwegenkai has already started operations. To date, it has helped cut CO2 emissions by about 1000 tons.