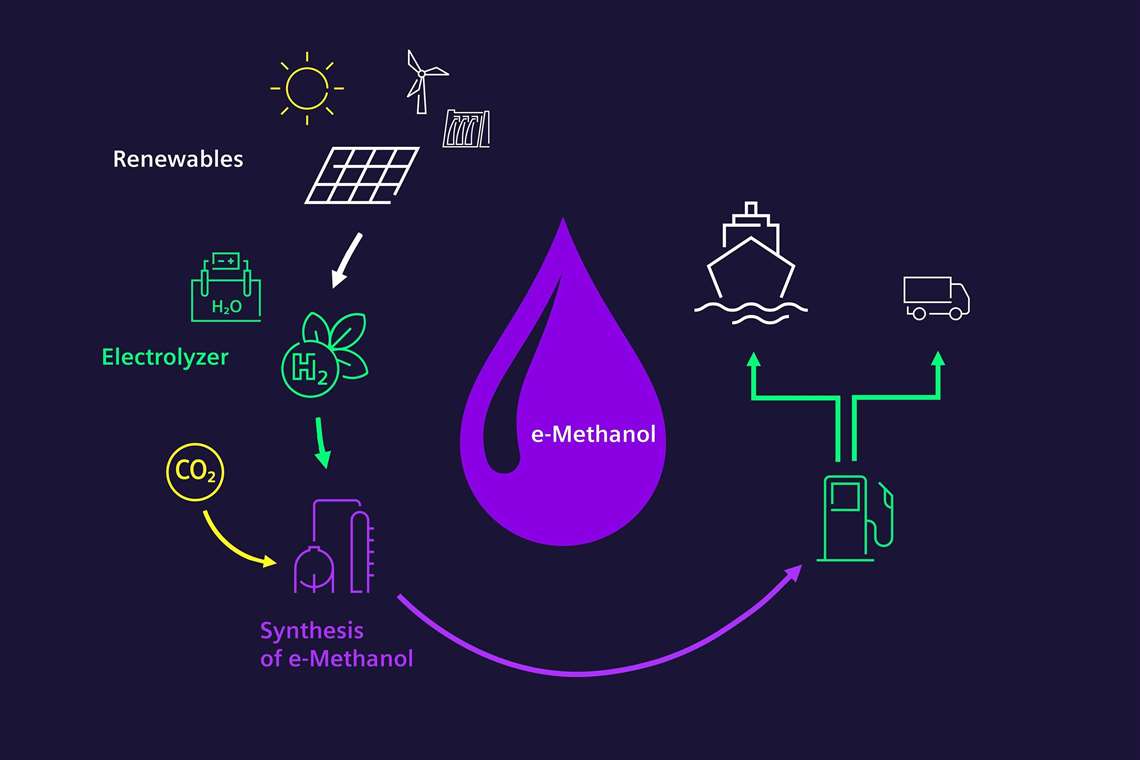 Supply expected to begin in 2023

Siemens Energy said it has secured an electrolyzer order from European Energy for the world’s first large-scale e-methanol project.

The Danish developer and operator of green energy projects is developing large-scale commercial e-methanol production facility with the hydrogen being provided by a 5 MW electrolyzer plant by Siemens Energy. The plan is that the plant will be built in Kassø, located west of Aabenraa in the South of Denmark, near the German border. Through the nearby 300 MW solar park of Kassø, developed by European Energy, the project will have access to the low-cost renewable electricity needed to produce cost-effective e-Fuel. End users of the e-Methanol will be the shipping company Maersk and the fuel retailer Circle K among others. The project secures the e-Methanol supply for Maersk`s first e-Methanol driven container vessel. Start of commercial methanol production is planned for second half of 2023.

Siemens Energy will design, supply and commission the electrolysis system consisting of three full arrays of its latest and most powerful line of PEM (proton exchange membrane) electrolysis products including transformers, rectifiers, distributed control system (DCS) plus the equipment to produce demineralized water. European Energy is the owner of the project and will be responsible for the engineering, procurement and construction, as well as for the operation of the facility.

“Climate change requires urgent action,” said Stefano Innocenzi, senior vice president of the New Energy Business at Siemens Energy. “Together with our partner European Energy we are taking over a first mover’s role in decarbonizing the marine industry. With this project we will bring e-Methanol to market at scale. E-Methanol or derived e-Fuels are predestined for long-distance ship and road transportation as well as for aviation. The project will be proof of the successful commercialization and scaling of our PEM technology.”

The global shipping consumes around 3050 terawatt hours (TWh) of the worldwide final energy consumption. For comparison: This is more than five times the total electricity consumption of Germany. And as nearly all is based on fossil fuels, mainly bunker oil, the shipping sector emits about 1,000 million tons of CO2 per year, about 13% of the greenhouse gas emissions from global transport. The International Maritime Organization (IMO) has already committed the shipping sector to halve greenhouse gas (GHG) emissions by 2050 (based on 2008 level) to meet Paris Agreement targets. Measures are new logistics approaches, increased efficiency, speed/power reductions and – as the most effective pathway – the application of sustainable fuels, i.e. largely carbon-neutral electricity-based fuels (e-Fuels), for propulsion.

“We are pleased to place this important order of what is believed to be the first large-scale commercial Power-to-X-project of its kind in the world,” said Knud Erik Andersen, CEO of European Energy. “This is a crucial moment in the green transition as we move forward with the decarbonization of hard-to-abate sectors such as the shipping industry, and we trust that Siemens Energy outstanding know-how of electrolyzers will become a strong foundation to expand our business of delivering sustainable fuels to the world.”