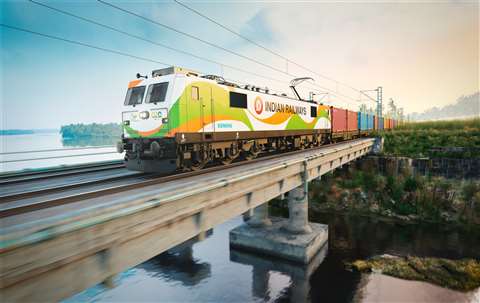 Siemens Mobility will design, manufacture, commission and test the electric locomotives, which will be delivered over 11 years, and come with a 35-year full service maintenance agreement. The locomotives will be assembled in the Indian Railways factory in Dahod, in the state of Gujarat, India. Maintenance will be performed in four Indian Railways depots located in Vishakhapatnam, Raipur, Kharagpur and Pune. Locomotive assembly and maintenance will be implemented together with the staff of Indian Railways. The contract has a total value of approximately €3 billion, excluding taxes and price variation.

“We are delighted to partner with Indian Railways and deliver one of the most powerful electric locomotives available,” said said Michael Peter, CEO of Siemens Mobility. “These new locomotives will help increase freight transport on one of the world’s largest rail networks, as they can replace between 500 000 to 800 000 trucks over their lifecycle. This historic order cements a firm commitment from Indian Railways to achieve 100% electrification of rail traffic in India. Our partnership will further strengthen Siemens Mobility’s position in India and support the country’s expanding railway market.”

The 9000 HP locomotives will be used for freight transport throughout the Indian Railways network and are specified to haul loads of 4000 tons at a maximum speed of 120 kpr. They will be equipped with Siemens’ Railigent technology systems that are also produced locally in Siemens Mobility factories in India.

India has one of the world’s largest rail transport and logistics networks used daily by 24 million passengers on more than 22 000 trains. Additionally, the Government of India plans to increase the share of railways for freight transport to 40-45% from the current approximately 27%. India is one of the few countries in the world with an almost fully electrified rail network. As one of the world’s fastest-growing markets for rail, India has clear sustainability and technology goals. Indian Railways and the Indian Government are clearly committed to invest in state-of-the-art products to reach net zero CO2 emissions by 2030. The 9,000 HP project stands testimony to this. As technology leader, Siemens Mobility is firmly committed to deliver world-class solutions to help transform rail in India.