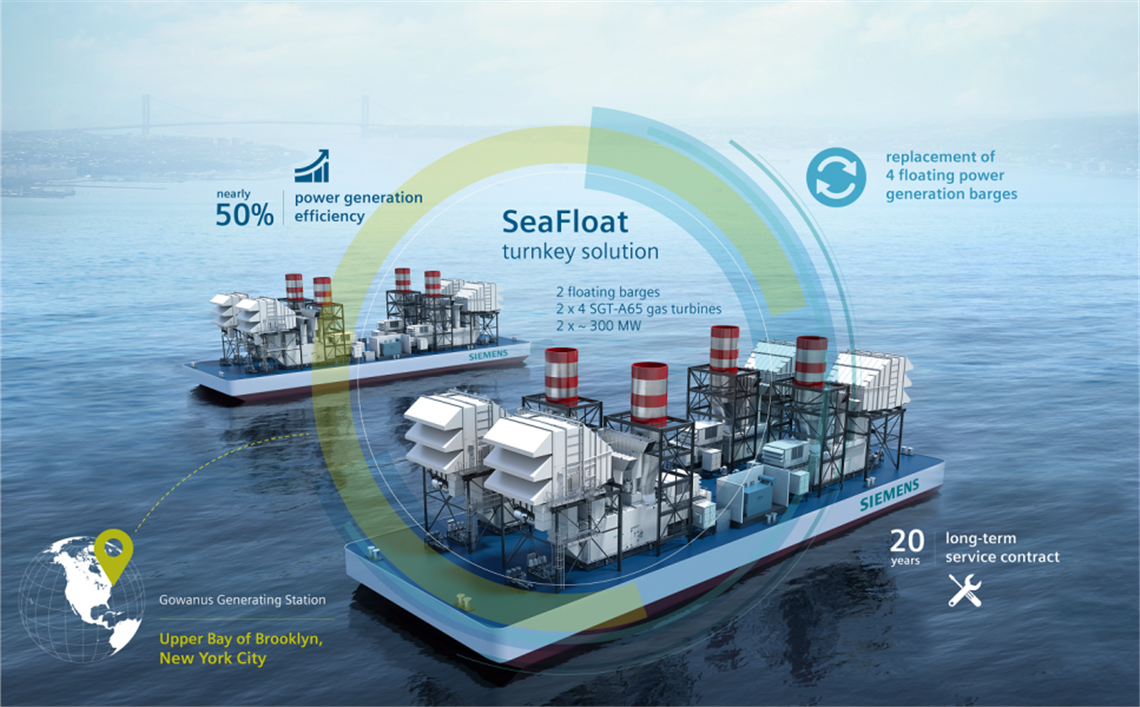 Astoria Generating Co. and Siemens signed a contract for the turnkey construction of two SeaFloat power barges to be equipped with eight Siemens SGT-A65 gas turbines.

The barges will replace four existing power barges located at Gowanus Generating Station in the Upper Bay of Brooklyn, New York City, resulting in cleaner, more efficient energy production, the companies said. Siemens will preinstall the high-efficiency power generating facilities on two newly constructed floating barges with a generation capacity of about 300 MW each. Retrofitting the station with SGT-A65 gas turbines and generators will improve the plants’ power generating efficiency by nearly 50% while significantly reducing potential emissions of pollutants like carbon dioxide and monoxide – all while using the existing gas infrastructure, according to Siemens.

As New York’s energy market changes, transitioning to more intermittent energy sources, New York City needs to maintain the reliability of its power supply while reducing potential emissions. The city – with more than 8.5 million inhabitants – is moving to obtain 70% of its energy from renewable sources by 2030. When solar and wind power can’t meet the need, quick start peaking units like the Gowanus Generating Station will become even more important, especially in congested areas like Southwest Brooklyn, Siemens said. The new units are designed to provide that reliability while reducing emissions and offering the flexibility to move the barges as needed.

The four-barge Gowanus Station, with a current generation capacity of 640 MW, was originally installed in the early 1970s and is approaching the end of its service life. By replacing those barges with two modern floating power barges provided by Siemens, Astoria Generating Co. will be able to retire the existing barges, reducing the total number of barges from four to two, and also retire two barges at the nearby Narrows Generating Station. Siemens will deliver eight SGT-A65 gas turbine generating sets – four on each barge – along with a Siemens control system. The turbines will run on natural gas as their primary fuel.

Each SGT-A65 (Industrial Trent 60) aeroderivative gas turbine will deliver up to 76 MW for the Astoria project in simple cycle service at 41.8% efficiency. With its fast cold-start capability and high cyclic life, these engines can rapidly add power to the grid to compensate for fluctuating and variable renewable and other energy sources, making it an ideal solution for peaking markets. More than 115 of the SGT-A65 gas turbines have been sold worldwide with more than 1.8 million fleet hours of experience.

“As New York’s energy market changes to rely on intermittent power sources like wind and solar, we need to ensure reliability,” said Mark Sudbey, CEO of Astoria Generating Co. “These state-of-the-art units will provide the quick-start energy production New Yorkers need while reducing potential emissions. And best of all, because they’re on barges, they provide the needed climate adaptation, adjusting to sea-level rise and increased storm surges, and also can be moved if the power is needed elsewhere.”