After a four-year absence, SMM returned as one of the world’s leading maritime exhibitions 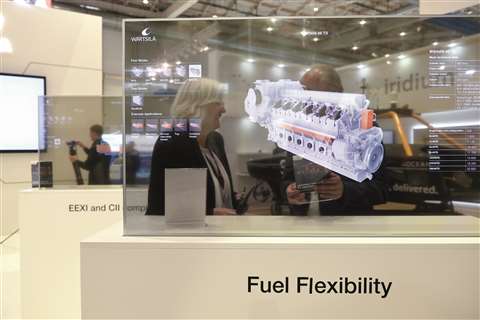 SMM Hamburg returned after a four-year absence and the event was highlighted by new engines and new fuels. (Photo: SMM)

It was perhaps surprising that the phrase “future fuels” seemed to take on a new meaning at SMM. While we are all very much used to hearing about electricity or hydrogen as future fuels for all types of mobility, the marine industry that gathered in Hamburg, Germany, seemed to have reached a slightly different consensus – the fuels of the future are mainly methanol and ammonia (both better with an “e-“ in front).

This consensus is mostly related to ocean-going ships, whereas for vessels on short routes or in coastal operations, hybrid, hydrogen and full electric are still seen as efficient options.

One of the common themes around the show concerned the availability of these future fuels. DNV, in its Maritime Forecast 2050, estimates that the marine industry’s push toward full decarbonization by 2050 will require around 270 million tons of alternative fuels. A mammoth challenge, in the words of DNV, though it is still positive that 2050 targets can be met if all players work toward the common goal.

This creates a major push for dual-fuel engines, as demonstrated by several new launches at SMM. According to some engine manufacturers, customers are looking at solutions that can be flexible to accommodate different fueling options in the future. Dual-fuel units can provide this flexibility and have the additional advantage of being able to use conventional fuels when alternative supplies are lacking.

Here is a review of some of the highlights at SMM. 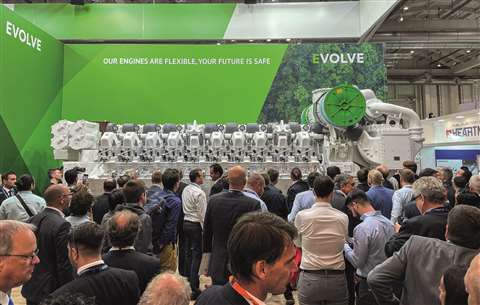 The engine can handle diesel, biodiesel, marine diesel oil (MDO), heavy fuel oil (HFO), hydrogen, methanol, liquefied natural gas (LNG) and compressed natural gas (CNG). It is certified for IMO Tier 2 and 3 and for EU Stage 5 emissions regulations. The 20EV23 has a nominal power range from 3960 kW at 720 rpm with a single­-stage turbocharger, to 7200 kW at 1200 rpm with two-stage turbocharger.

MAN Energy Solutions unveiled the 49/60DF dual-fuel engine family, which the company said is capable of running on LNG, diesel and HFO as well as a number of more sustainable fuels such as biofuel blends and synthetic natural gas. 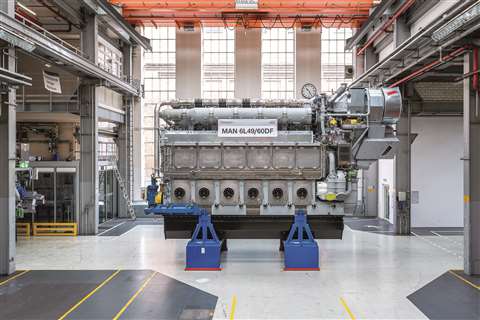 MAN Energy Solutions plans to introduce a pure diesel engine based on the 49/60 platform in 2023 that will be retrofit-ready for running on methanol and LNG should the demand arise at a later stage. 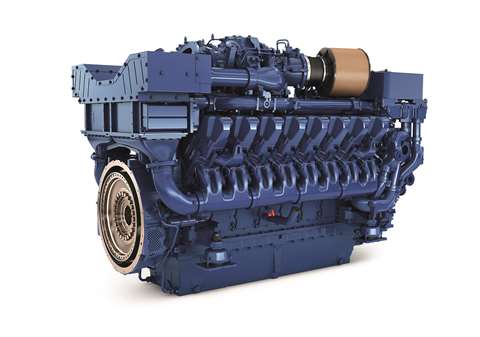 Rolls-Royce Power Systems said its marine engines, such as the Series 4000, will be able to operate on sustainable fuels in 2023. (Photo: Rolls-Royce)

Rolls-Royce Power Systems (RRPS) announced the release of mtu marine engines for sustainable fuels in 2023. In particular, the mtu Series 2000 and Series 4000 engines for ships will be gradually released for EN15940 synthetic diesel fuels from the beginning of 2023, following bench and field tests.

According to RRPS, a reduction of CO2 emissions up to 90% is possible through operation with hydrotreated vegetable oil (HVO/renewable diesel).

Tests have been carried out on the fleet of California operator Golden Gate Ferry. mtu engines have run 41 000 hours with HVO showing a convincing performance, RRPS said.

Tests demonstrate that when HVO is used, mtu engines perform on par with diesel in terms of maximum power, load acceptance and fuel consumption. Swindler added that the visible smoke that was seen at the dock with conventional diesel has been reduced with the switch to HVO.

RRPS also announced methanol engines, fuel cell systems and hybrid propulsion packs to be launched over the next six years.

From 2023, RRPS will bring to the market the mtu Hybrid Propulsion Pack for mtu Series 2000 and 4000 engines. From 2026, the company will introduce methanol engines based on mtu Series 4000.

The company said the new engines will be capable of running on 100% methanol fuel with a spark-ignited combustion based on the Otto process that Rolls-Royce Power Systems has mainly used with its mtu gas engines.

The engines in the range will have the same power ratings as the current 4000 series engines, RRPS said, with the 16-cylinder vee-configuration delivering ratings of 2000 to 2200 kW power.

Finally, from 2028, RRPS plans to launch mtu fuel cell systems for marine applications that will be available for both main propulsion and onboard power generation. The company explained that fuel cells powered by hydrogen will not produce any harmful emissions – neither CO2 nor nitrogen oxides or particulates. 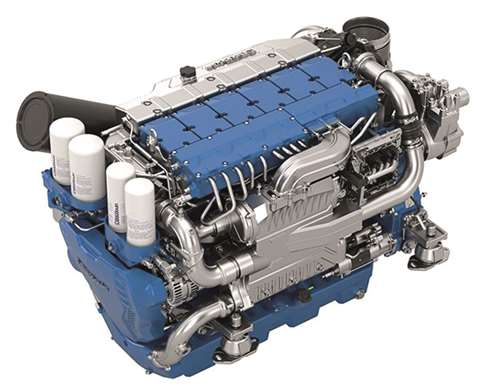 The choice of power ranges enables adaptability across a variety of light-duty applications, including military, recreational and pilot boats. Commercial ratings for heavy-duty applications such as fishing, firefighting and passenger boats will be available in the coming months.

The six-cylinder 6F21 has a bore and stroke of 127 x 165 mm and an overall displacement of 12.5 L. For larger applications, the company is developing an eight-cylinder, 17 L version.

The engine has a strengthened engine structure to withstand high torque and higher cylinder pressure of over 200 bar, plus a two-stage turbocharger system, two intercoolers and a common rail electronic fuel injection system operating at 2200 bar. These features are packaged in the smallest engine ever released by the company; it measures just 1470 x 1100 x 1705 mm.

The flywheel housing, oil sump, covers, brackets, supports and even heat exchanger bodies are all constructed from light alloys for reduced overall weight. Individual cylinder heads allow for easier maintenance even in the smallest engine rooms.

The 6F21 complies with IMO 2 and EPA 3 standards, with IMO 3 and EPA 4 following soon, the company said. 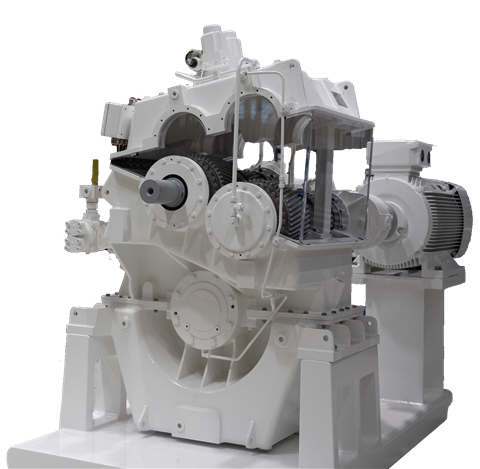 Hagen Birkholz, Reintjes’ director, Development, said that the new hybrid gearbox is an upgrade of existing models in the company’s range. It is a reverse-reduction gearbox integrated with an electric motor delivering 200 kW. The WAF 863 is flanged to the diesel engine and provides controllable power take-off and power take-in.

In power take-in mode, the electric motor drives the ship. Noise levels and energy consumption of the powertrain are reduced to a minimum, and efficient operation is achieved with power coming from a gen-set or any electric power source onboard.

In power take-off mode, the electric motor of the hybrid system can be operated as a generator, feeding electric power into the ship’s grid to assist existing generator sets. Optionally, the remaining energy can be stored in batteries.

According to Birkholz, the hybrid gearbox is suited for workboats such as tugs. The unit is available in other sizes as well, he said. 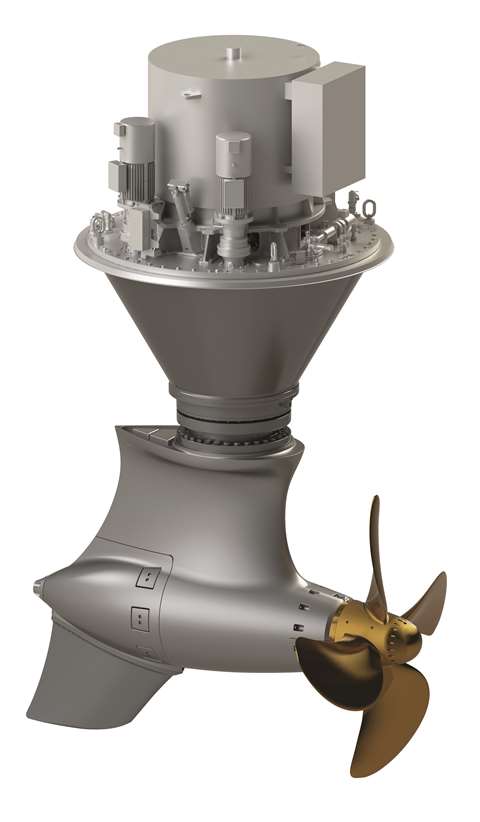 Schottel said the SRP-D is based on the proven principle of the rudder propeller but is an economical yet powerful solution that greatly improves the positional accuracy of vessels in dynamic positioning operation.

Schottel also exhibited its EcoPeller SRE azimuth propeller that has encountered a good success particularly in the European ferry market. The company said it is increasingly being installed in other vessel types and new orders include installations in LNG bunker vessels, superyachts and research vessels.

The EcoPeller azimuth unit was developed for electric drive, which eliminates the gearbox to provide maximum mechanical efficiency and a reduced noise level. The propeller has shown energy savings of up to 25% achieved during the retrofit electrification of a Norwegian ferry.

Finland-based expert in fuel and auxiliary systems Auramarine presented its new fuel supply unit for methanol which is suitable for two-stroke and four-stroke engines. It supplies methanol from the tank to the engine and other consumers. 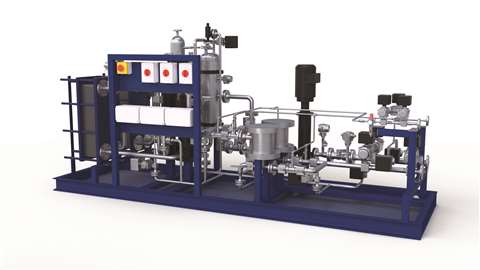 The system regulates fuel pressure and maintains the supply pressure within the specified tolerances during load changes. It also regulates fuel temperature and acts as a filter against impurities in the fuel.

Auramarine explained that since methanol is toxic and a low flashpoint fuel, the fuel supply unit was designed to meet strict safety requirements for materials and components, assembly, operation and maintenance.

Bonfiglioli introduced its 800 Series winch drive which comes in five sizes from 25 000 to 160 000 Nm in marine-resistant paint, suitable for high-pressure cleaning. 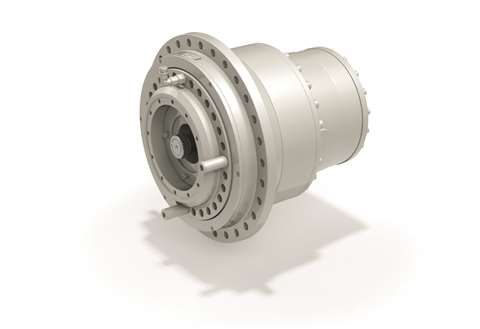 According to Bonfiglioli, a key feature of the new winch drive is the easy and fast assembly of the 800 Series gearboxes into the winch drum. Maintenance requirements have also been simplified, the company said.

The new 800 winch drive series is based on a modular architecture with additional standard stages that widen the available range of torque and speed. Several available motor flanges allow the combination with preferred electric as well as hydraulic motors; right-angle stages allow space saving winch designs.

All Bonfiglioli drives are approved for the standards of the American Bureau of Shipping (ABS) and certified from Det Norske Veritas and Germanischer Lloyd (DNV GL) and the China Classification Society (CCS).

ZF unveiled a hybrid version of its ZF AT 80 thruster system, suitable for a range of professional vessel with a performance range of approximately 900 kW to 1600 kW.

The hybrid AT 80 is available as an azimuth thruster with an electric motor placed at the upper gearbox’s Power-Take-In (PTI) and performance tailored to the individual vessel type and application. Applications can range from tugs and pushers to ferries, research vessels, supply boats and more.

The new thruster enables full electric sailing and maneuvering, which is especially beneficial in ports or waterways with strict emissions and noise regulations. It can also be used as an additional booster to avoid obstacles or increase top speed as needed, as well as for firefighting purposes with the diesel engine and electric motor separately driving the firefighting pump and thruster.

The hybrid AT 80 includes a special seal arrangement designed for biodegradable oil (EAL). It is also available as a purely electrically driven solution (L-drive configuration), as well as with various optional features such as an integrated brake or power take-off (PTO).

Filtration specialist Alfa Laval presented new integrated fuel cell modules at SMM. The company does not manufacture fuel cells itself but works as a system integrator. 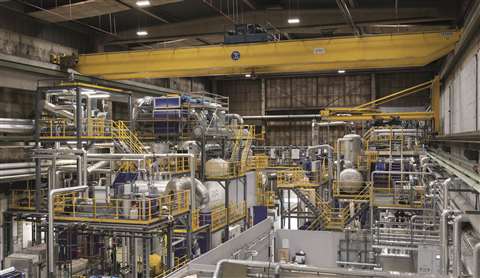 The first is a concept with high-temperature proton exchange membrane (HT-PEM), which works at a higher temperature than standard PEMs and offers a high energy efficiency. This system is currently in a testing phase with methanol in a 10 kW installation and will be ultimately available in 200 kW racks for a standardized and scalable system.

The second project is related to testing capabilities for ammonia fuel, exploring the full chain of fuel preparation and handling both for internal combustion applications as well as for fuel cell systems. In this case, the fuel cell being tested with ammonia starting in 2023 is a 7 kW solid oxide fuel cell concept.

“We have approvals to use ammonia in our test center where we recreated a full marine engine room,” van Riel said. “The excess heat that is created during the test processes is used for local district heating.”

The company has already been testing different fuels, such as LNG, methanol or biofuels. 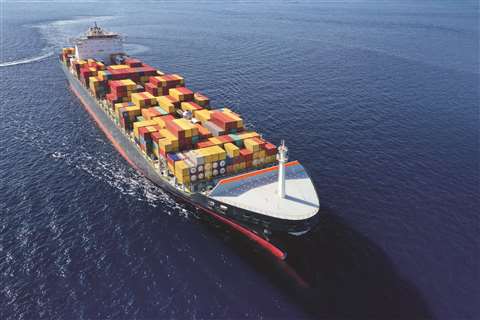 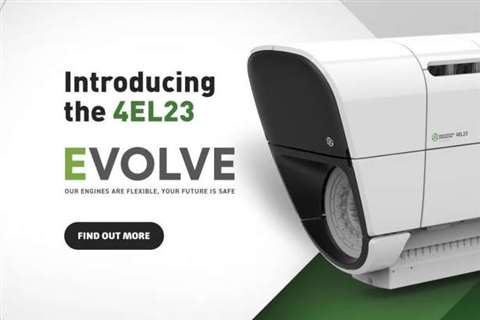 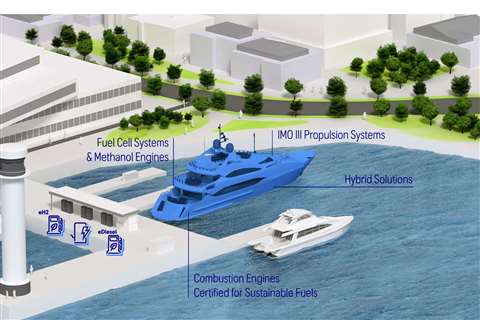 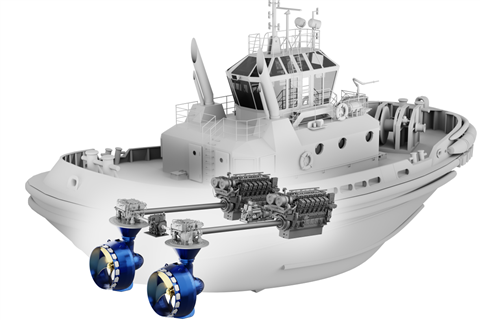