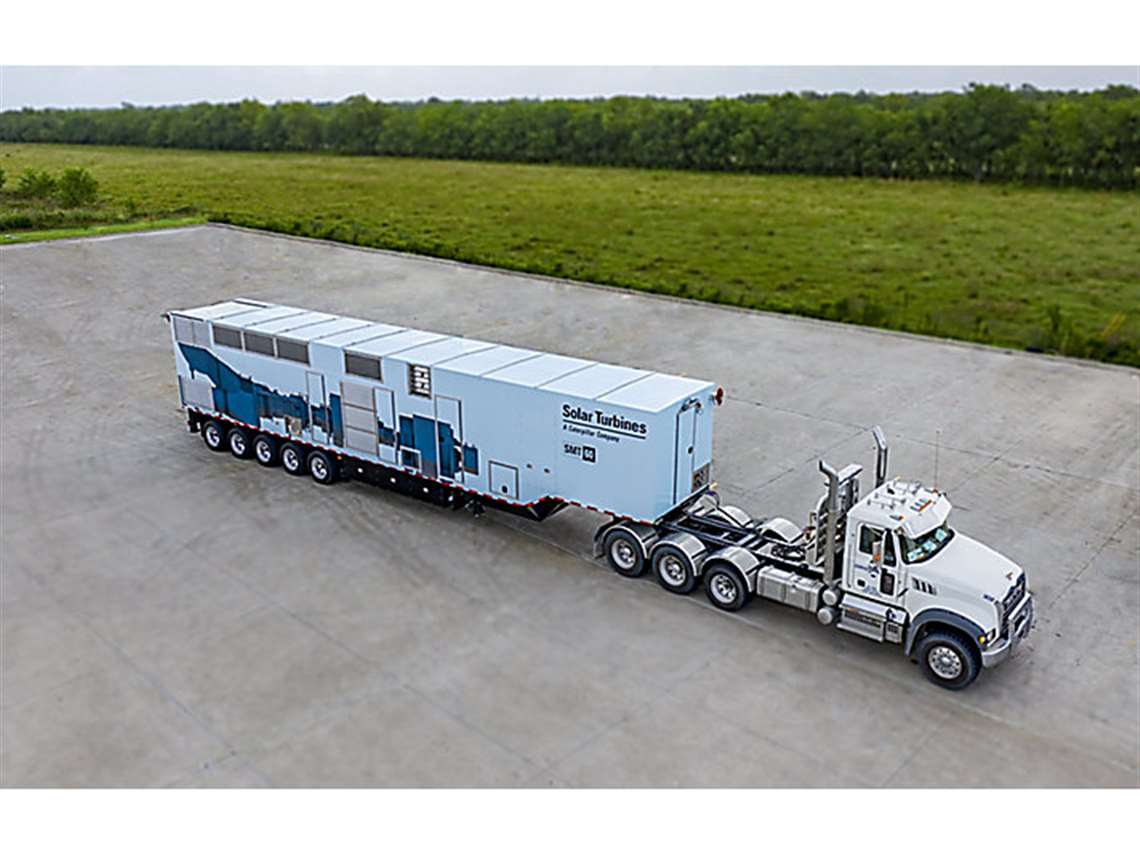 The new product is an extension and refinement of the mobile solution Solar introduced about 20 years ago, right before the shale boom started in earnest, Lyons said. Back then, the mobile unit had three trailers and took two to three days to set up.

“But it was nice and offered 5.7 MW of power and for 20 years this has pretty much been our standard and we’ve sold a bunch of them,” Lyons said during a presentation at the 2020 Gas/Electrical Partnership in Houston, Texas, USA.

At the heart of both the new and old system is the Taurus 60 single-shaft gas turbine, which has been Solar’s workhorse since 1987, Lyons said. In fact, the company has sold about 1500 of them.

But through listening to its customers, Solar found that the market has changed, especially with the growth of e-fracking in the Permian and Marcellus basins. E-fracking is the use of otherwise flared gas in turbines to power electric motors.
“We also know that especially now that the oil companies are even more fixated on costs,” Lyons said. “There’s a lot of effort to avoid capital spending as much as possible—put it off, try not to take on inventory.

“There’s a lot of green decision making being made and of course flaring is a big problem and it’s only getting worse the more we develop,” Lyons said. “So these are the kinds of, the kind of market that we’re looking at looking at for this new product.”
When they started to design the SMT60 in 2018, customers told Solar to keep the new design simple, Lyons said.

“They told us ‘we don’t need to have the platinum version. We don’t need a Rolls-Royce. We need something that works, so don’t overengineer it,’” Lyons said

Space was also a concern with customers, Lyons said, as was set-up time.

The SMT60 incorporates a single trailer with fully integrated design and takes less than six hours to set up on site. There are no crane lifts involves, which makes it easy to coordinate relocation. The SMT60 includes an auto-leveling system and has only three main connections: medium voltage, black start, and gas fuel. It also incorporates a 13.8 kV Kato generator.

The mobile unit is designed to burn the widest variety of gas as possible, Lyons said.

“We think that this product is very important because we keep on hearing about the flare gas or the wasted gas that’s otherwise not used,” Lyon said. “Here’s your opportunity to take that gas and to use it and monetize it for the development of shale oil in the Permian right now and later in the rest of the world.”