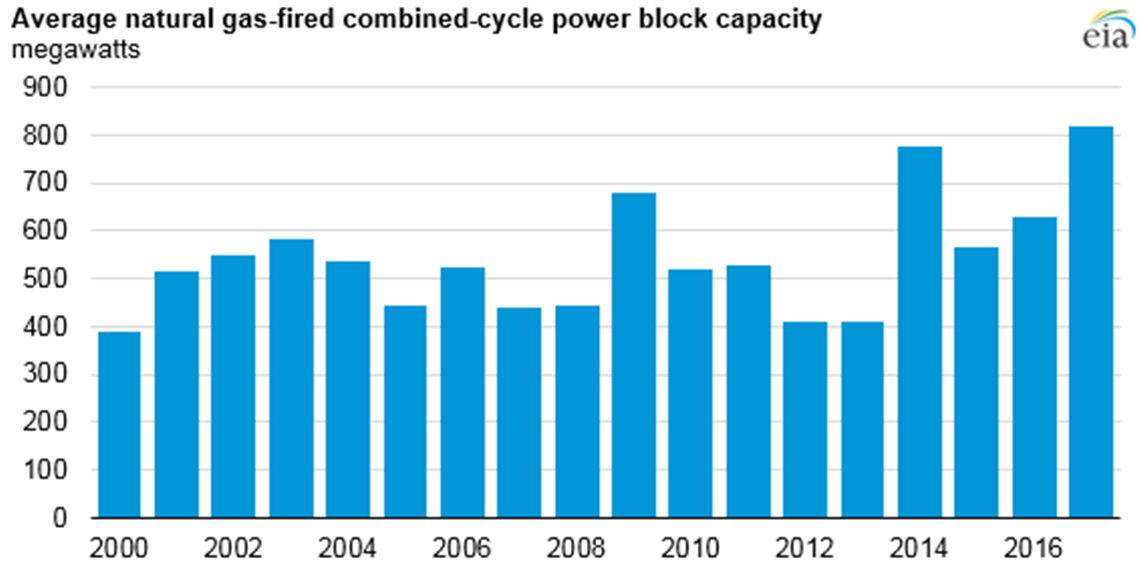 Beginning in 2014, the average size of a natural gas-fired combined-cycle power block in the U.S. has increased significantly, according to an analysis by the U.S. Energy Information Agency (EIA).

The average combined-cycle power block installed between 2002 and 2014 was about 500 MW. After 2014, power block capacity increased, reaching an average of 820 MW in 2017. Power blocks have increased in size as the performance of combined-cycle units has continued to improve, and current and projected natural gas prices and supply provide a competitive advantage for the combined-cycle technology, according to the EIA. The most common configuration involves two combustion turbines supporting one steam turbine.

Factors such as operating cost and performance affect the sizing of a combined-cycle power block for a particular application. The heat rate of a generator, measured as the amount of BTUs required to generate a kilowatthour of electricity, is the metric most commonly used to represent the efficiency of commercial generators, according to the EIA.

The trend toward larger combined-cycle power blocks can largely be explained by the efficiency gains (lower heat rates) available from larger power blocks. For example, the capacity-weighted average heat rate of power blocks less than 500 MW is 6% higher (or less efficient) than that of power blocks larger than 1000 MW. Larger power blocks also generally have lower per-unit capital costs, making them more attractive investments, according to the EIA.

The EIA report found that smaller power blocks still play an important role in providing electricity. Generators have a minimum output level—known as minimum load—below which continued operation creates risks of instability, inefficiency, and high emissions. Smaller blocks, which inherently have lower minimum loads, are commonly associated with greater flexibility because they can operate through low demand periods without having to shut down.