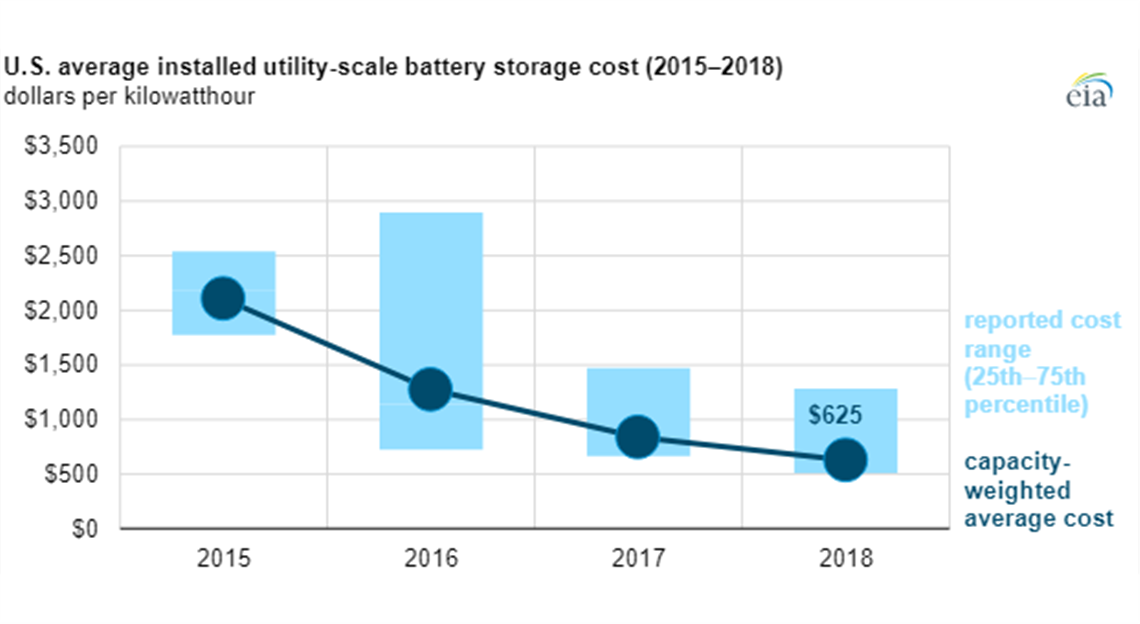 The average energy capacity cost of utility-scale battery storage in the United States has decreased from US$2152 per kWh in 2015 to US$625/kWh in 2018, according to a new report by the U.S. Energy Information Administration (EIA).

At the end of 2018, the United States had 869 MW of installed battery power capacity (the maximum amount of power a battery can provide at a given moment) and 1236 MWh of battery energy capacity (the total amount of energy that can be stored by a battery), the EIA reports.

Battery storage costs vary by region and application. Independent system operators (ISOs) and regional transmission organizations (RTOs) manage the operation of the U.S. electric system. To understand how battery storage costs vary based on a battery unit’s location, the EIA grouped cost data into regions based on RTOs/ISOs or (such as in the case of California) aggregated different entities in the state to avoid disclosing respondents’ confidential information in areas with fewer battery systems. At the regional level, the 2013 to 2018 average utility-scale battery costs ranged from US$1946/kWh in the PJM Interconnection (PJM), which manages the electric power grid in 13 eastern and midwestern states and the District of Columbia, to as low as US$947/kWh in Hawaii.

Most of the batteries installed in PJM are used for power applications, such as frequency regulation, which helps maintain the grid’s electric frequency on a second-to-second basis. PJM prioritizes power capabilities that use shorter durations over energy use cases that store large amounts of energy over time. For this reason, the power capacity installed cost is a better indicator of price for value in PJM.