Wärtsilä and Finnish utility Vantaa Energy Ltd. will develop a 10 MW Power-to-Gas (P2G) plant for Vantaa Energy that will be the largest in Finland when it is commissioned in 2025.

The plant will also be the first in the country to produce carbon-neutral, synthetic methane on a commercial scale, the companies said.

Synthetic methane is produced from captured carbon dioxide and hydrogen produced with renewable energy. In May 2020, the parties signed a cooperation agreement for a concept study examining the profitability of the Power-to-Gas plant in connection with the Vantaa Energy waste-to-energy plant. The decision to continue the project is based on the outcome supporting the further planning and development of the study. 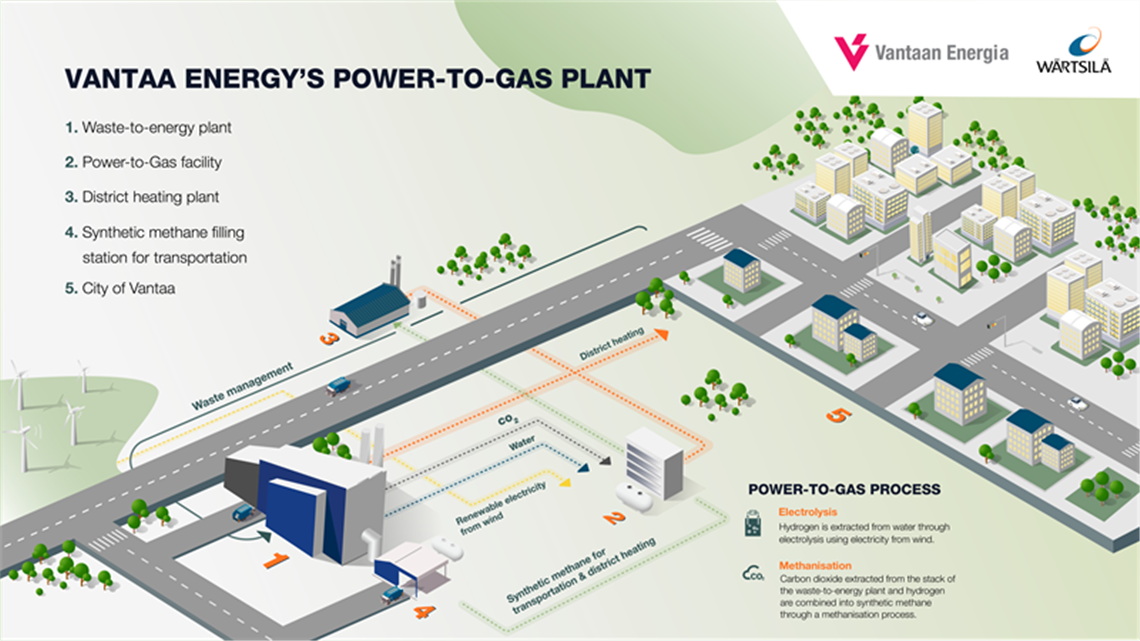 The EU has set a common target of climate neutrality by 2050, and has recently raised its emissions reduction target to 55% by 2030. Finland aims for carbon neutrality by 2035. The plant will represent a crucial step in Vantaa Energy’s decision to be fossil-free by 2026. Phasing out the use of fossil fuels utilizing versatile technologies is an important enabler for carbon-neutral Vantaa Energy in 2030. The Power-to-Gas plant will allow Vantaa Energy to start using electricity produced from renewable sources for reducing CO₂ emissions in district heating, other applications where gas is used, and transportation. The project demonstrates sector coupling of heat, electricity and transportation, which provides Vantaa Energy completely new business opportunities.

Wärtsilä will lead the pre-engineering phase of the project. Once completed, the project will produce synthetic methane from renewable electricity sources by extracting hydrogen from water, as well as extract CO₂ out of emissions from an existing waste to energy plant. The resultant methane will be sufficient for use in up to 200 trucks per day, and replace conventional, fossil natural gas in district heating during heating peaks in winter.

“The unique and excellent location of the plant has many advantages. We have access to clean water and renewable electricity using wind energy, and the waste heat produced in the process can be utilized for district heating. The location also enables connections between the electricity, heating, and transport sectors. The energy sector plays a significant role in climate change mitigation, and we are in the vanguard of contributing to a speedy transition to clean energy production,” said Jukka Toivonen, CEO, Vantaa Energy.

“The clock is ticking and we need to accelerate the move towards decarbonization before it’s too late. This project showcases our vision of working towards a 100% renewable energy future, in which sector coupling and future fuels will play a decisive role. By cooperating with Vantaa Energy in this state-of-the-art project with us leading the pre-engineering, we are developing our Power-to-X technology and integration competences to meet future market needs. Collaboration with customers and other stakeholders supports our vision,” said Saara Kujala, general manager, Business Development, Wärtsilä Energy.

Wärtsilä continues to be a front-runner in developing the know-how and modelling of future energy systems, including Power-to-X applications that will have a key role in meeting decarbonisation targets globally. Wärtsilä has modelled cost-optimal, 100% renewable energy systems for 145 regions and countries. The results indicate that 100% renewable energy systems need over 900 GW of P2G capacity for long-term and seasonal energy storage. Once operational, the plant of Vantaa Energy will also highlight Finland’s support for the European Commission’s plans for the creation of a European hydrogen economy.

Wärtsilä’s pre-engineering work is expected to be completed by the end of 2022, and the project is scheduled for completion in early 2025.