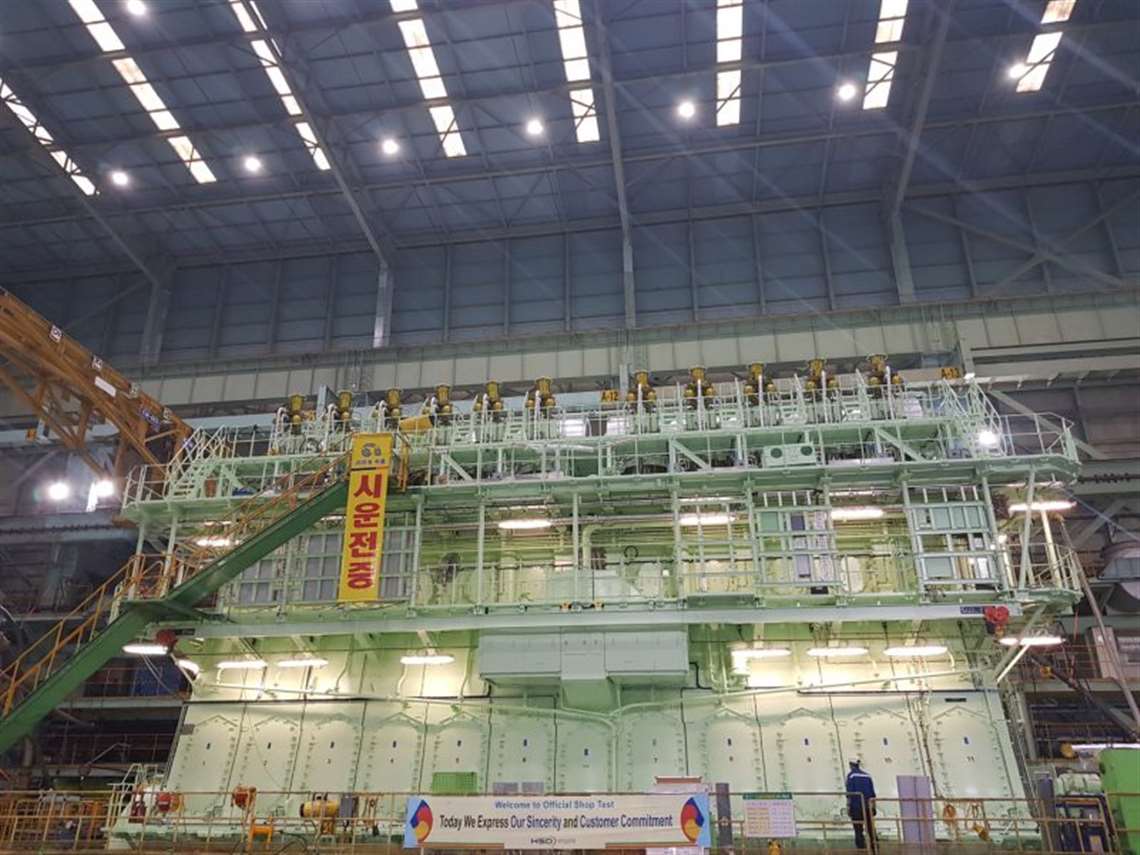 HMM, the South Korean shipping company, launched the first in a series of ultra-large containerships that will each feature individual MAN B&W G95ME-C10.5 engines.

While the engine’s power delivery has been adjusted downwards to achieve an optimal fuel consumption, the ME-C Mk 10.5 type is capable of delivering 6870 kW per cylinder, making it the most powerful engine ever developed by MAN Energy Solutions’ Two-Stroke business. Physically, it measures almost 22 m in length, 18 m in height and 2,230 t in weight.

“We closely follow market trends and this opportunity comes at a time when modern shipping is placing new demands on engine developers,” said Wayne Jones OBE, Chief Sales Officer and Member of the Executive Board, MAN Energy Solutions. “Our new engine platform is designed to meet and even exceed such challenges. As we are able to support such a prestigious vessel with this groundbreaking technology and it’s the first in a series of ships, is very positive and important for us.”

The MAN B&W 11G95ME-C engine has been built on a new Mk 10.5 platform, representing an update of its Mk 9.5 predecessor with improvements in performance, fuel consumption, emissions and cylinder condition, the company said. Among other features, the platform/engine comes equipped with MAN Energy Solutions’ new fuel-booster injection valve (FBIV), and top-controlled exhaust valve (TCEV). The HMM Algeciras will enjoy a reduction of 51% in CO2 emissions, compared with previous generations of container vessels, with the help of the new engine.

“The market has been asking for an engine with the capability to handle the propulsion of today’s gigantic containerships and we feel that this new platform delivers in every technical regard,” said Bjarne Foldager, Senior Vice President, Head of Two-Stroke Business at MAN Energy Solutions. “It is truly pleasing that it has proven itself aboard such a noteworthy vessel.”

The HMM Algeciras was recently launched at the Daewoo Shipbuilding and Marine Engineering (DSME) Okpo shipyard in Geoje, Korea. The newbuilding measures 400 m in length and 61 m in beam, and was ordered in August 2018 as part an order for 12 ultra-large containerships. DSME will ultimately construct seven such vessels with fellow South Korean building giant, Samsung Heavy Industries, taking care of the remainder. All 12 vessels are scheduled for delivery during 2020.

HSD Engine Co. Ltd. built the new engine in South Korea. The vessel is equipped with a hybrid version of an exhaust-gas scrubber that can run with both open and closed circuits, enabling compliance with IMO 2020 fuel regulations.