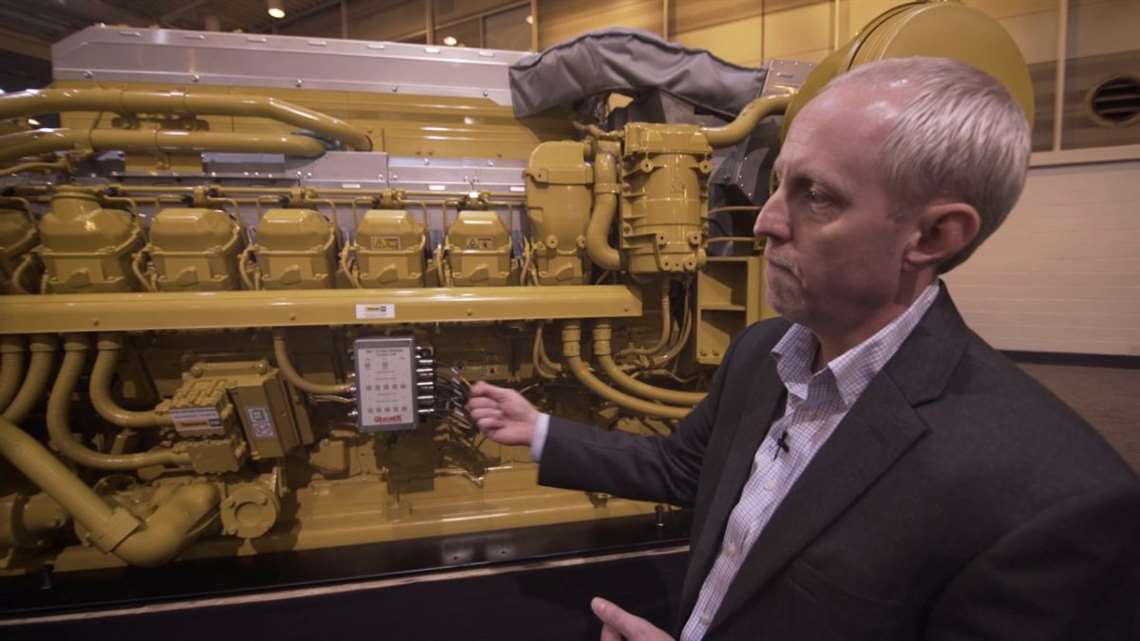 The company said the 3500E series builds upon the legacy and reliability of the Cat 3500 engine platform, providing customers up to 20% greater power density, 10% greater fuel efficiency, enhanced durability, and longer life to overhaul while reducing owning and operating costs.

“Dredgers are typically operated around the clock,” said Soria, “so minimizing downtime is intensely important for our customers. SCR was the right technology since it introduced minor changes to the engine itself and made use of one of the most proven emissions reduction technologies within Caterpillar. Uptime is not just a buzzword, it is the result of more than 160 000 SCR installations and 84 million hours of Tier 4 operation accumulated in the electric power, machine, rail and marine industries.”

SCR works by injecting urea into the exhaust stream, a catalyst helps convert nitrogen oxide into harmless diatomic nitrogen carbon dioxide and water vapor. The Caterpillar SCR technology is a closed-loop system that senses where the engine is in its operating range and adjusts appropriately, reducing consumption, the company said.

“This closed-looped control, along with advanced engine combustion calibration ensures exhaust temperatures are in tolerance for the SCR catalyst,” said Soria. “This eliminates the risk of catalyst damage that could occur from higher exhaust temperatures seen in today’s engines.” The engine also utilizes a turbocharger optimized air system to provide much more back pressure capability allowing for a much smaller SCR system.

“SCRs require minimal to no routine maintenance and most importantly, we’ve managed to align their lifetime to meet or exceed major engine overhaul,” said Soria.

“Lowering total cost of ownership is one of the most commonly used phrases in the commercial marine industry, and it is also one of the hardest to precisely measure”, said Jim Mundth account manager for Caterpillar Marine. That’s why Caterpillar has gone beyond traditional models to develop EVA (engine value analysis) to accurately capture and compare the total lifecycle costs for engine platforms across multiple engine manufacturers.

“The Caterpillar EVA tool is the most robust total cost of ownership tool available in the marine marketplace to help customers’ make an informed and educated decision in their power selection process”, said Mundth. “It supports parameters that aren’t often included in similar analysis tools, including alternative fuels & DEF consumption, load profiles across varied power inputs and emissions regulations, including EPA Tier 4 and IMO III.”

“The key goal of Jan de Nul Group with these new 3500 m³ TSHDs was to bring the certified cleanest vessels to the dredging market,” Deruyk said. “We decided to limit emissions below EU Stage V, which is the most stringent emissions regulations in the marine industry so we focused on three key aspects: engineering the most efficient engine room, optimal power management, and making use of exhaust gas aftertreatment systems,” said Michel Deruyck, fuel coordinator for Jan de Nul Group. “We quickly realized that the Total Fluid Optimization of the 3512E was unmatched and proven. Thanks to all these measures, we anticipate yearly savings of half a million liters of fuel per vessel running the engines in fuel optimized mode, That’s nearly a 9 percent cut in our fuel bill but more importantly, a direct reduction in greenhouse gas emissions.”